As we said earlier this week, Inprint friend and local arts blogger Dean Liscum has been attending the Word Around Town 2012 week full of poetry happenings this week. We asked him to report on the tour for us and share his thoughts. Remember, the tour continues through Saturday, August 18th. Learn more about the W.A.T. by clicking here.

I made it through Wednesday, which is saying something if you have not been taking daily doses of live poetry. Here are some of my impressions.

The tour has made stops at Bohemeo’s, the Artery, BoomTown Heights, and EAT Gallery. They are each unique places with their own personality. Bohemeo’s has got a community center atmosphere with plenty of indoor and outdoor seating for groups and a permanent stage. The Artery is a secreted away performance paradise in the middle of Midtown. Boomtown Heights is a traditional arthouse coffee shop in a part of town that has badly needed one for a while. EAT Gallery has the feel of a sidewalk cafe with a motto that I wish I’d have used with my family at meal time, “Each item is a complete work of Culinary Art. NO MODIFICATIONS or substitutions”. 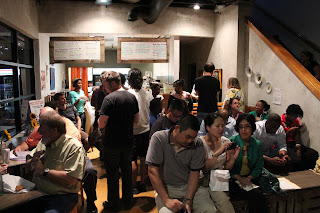 I’m not sure what the usual crowds are like for these venues. Seeing a bunch of poets and their entourages, I imagine that the regulars ran. Nevertheless, I’m pretty sure the proprietors made bank as the WAT events have all been standing room only.

Houston poets look like every one else. I mean at least the hoi poloi. But then they take the stage and I’m like, “Damn, how did she sneak that up on me?” It’s like someone just kick-punched a nerve I didn’t know I had.
For instance David Tomas Martinez introduces the subject of Medusa and Freud’s view that she’s all about castration. Carol Adams follow-ups with a poem about kissing Medusa, and dee!colonize reveals in one of her narratives that she was Medusa–at least to a couple of teenage boys who couldn’t handle her ringlets of hair–and she’s not only OK with that but learned to love her inner Medusa. By the end of the reading, I’m a little tantalized and a little traumatized, sidling up to dee!colonize in hopes that I can nonchalantly run my fingers through her snakes while cupping my cojones with the other mano for protection. 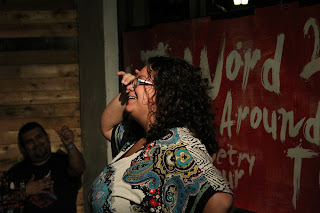 Or when on his birthday, Stephen Gros reads a poem about the father he never knew. Then later the same evening R.A.I.N. performs a piece about a young woman who regrets having an abortion after her lover abandoned her. On that same night, Tracy Lyall describes the pains and indignities that her daughter will not suffer, father or no.
Or when Outspoken Bean (with a guest poet) decries the digital division that we call social media and then recounts how the gift of an ipad was his only connection to his mother serving in Iraq. Blanca Alanis follows that with a tale of connection through poetry and the book store in which she and her husband raised their kids. This in the shadow of Jennifer Gabiola’s poem of healing and mourning of her father’s recent death, and Kathy Faye’s poems to her ailing aunt and deceased mother the previous evening. 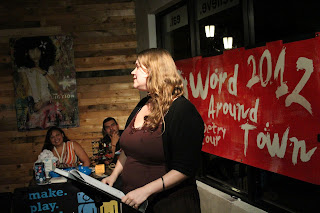 Or when Makeda performs a piece about an obsessive, computer savvy lover (that we all are) playing it cool as a counter point to Gerald Cedilla’s character who plays the emotions of a fellow prisoner for comradeship and safety. 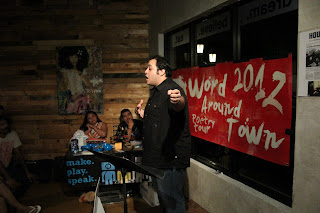 Or when Chris Wise speaks his white trash anthem and it resonates in my mind with Oscar Pena’s noblesse oblige of a father who loves his gay son while he wrestles with his Christian beliefs. 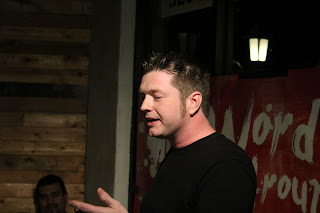 Or when, Marcel Murphy puts political exploitation of Haiti in metaphors any streetwise soul can understand or when Joe B just puts the poetry and me in perspective, period. 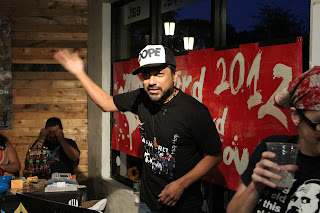 That’s the experiences of local poets that I’ve had at WAT. WHAM! and then, they stealthily recede into the audience as if nothing happened.

In four days of poetry, I’ve seen three hosts: Lupe Mendez (so nice they made him do it twice), Stephen Gros, and Outspoken Bean. They own the event in their own way. Lupe’s style is chill. If he weren’t prodding poets to take the mike, his style would work equally well hosting supermodel slumber parties. “Oh? If it’s locally sourced honey, that’s OK. Just make sure you don’t break a nail. I don’t want any tragedies on Lupe-time.”  Stephen Gros is an avuncular MF. I can imagine him leading a Rick Steve’s tour of Beaumont and repeatedly disparaging its patron saint of white trash, Chris Wise. At some point, I know a couple of surly septuagenarians would corner Gros with a scooter and knee cap him with a cane. Outspoken Bean is all about making it happen. In a former life, he must have been a train station manager. I have never seen a host of poets, not to mention a poet, run a more punctual event. He’s my candidate for Metro’s chairman or field trip coordinator at the local elementary school. Those kids would be damn safe and back at school for nap time. 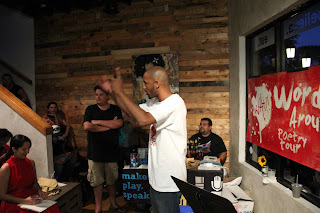 Houston poets don’t proselytize, but they do promote. WAT has plenty of swag, from t-shirts to buttons to books of poetry by the performing poets. It’s inexpensive and in this town, it’s necessary to show your pride. Look. Wearing an Astros jersey is already a badge of shame, and you know at some point the Texans are going to fumble. That’s when you can shirt-up with Houston pride a la WAT, “Hey dawg, Kool B hasn’t missed a beat in 10 years.” 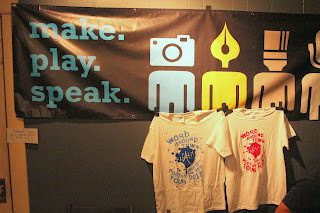 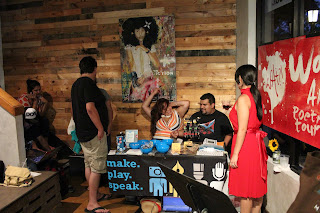 Events I didn’t know about

At the end of WAT, I intend to post a list of readings and events that I discover at the readings while talking to poets and the organizers. One event that I’ve learned about is the Maven Series hosted by Outspoken Bean at EAT Gallery on the 4th Saturday of every month. Another is Oscar Pena’s Poetry Readings on the 4th Tuesday of the month at the Barnes & Nobles in Webster, Texas.

One thought on “Notes from the WAT Tour midway through”