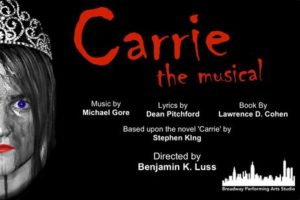 We all know about the pig’s blood. Carrie was a game-changer not only for horror and teenage revenge fantasy movies, but also for the careers of Stephen King and director Brian De Palma. On July 21st and 22nd, however, Broadway Performing Arts Studio will put on a production of the ’88 Broadway hit Carrie: The Musical  at MATCH theatre , which, in my opinion, begs a number of questions, so I contacted director Benjamin Luss.

MATTHEW KRAJNIAK: I’d imagine that some books make for better musicals, but, if I’m honest, I wouldn’t think of Carrie as being such a book. What about it made Michael Gore, Dean Pitchford, and the other creators of the original Broadway production want to turn it into a musical and what qualities of a book make for a good musical?

BENJAMIN LUSS: I do not know the reasons the creative team originally adapted Carrie into a musical, but the original 1988 production failed miserably. The 2012 revival (re-write) focuses on how humans want to be accepted and loved by their peers and families. This resonates with the audience as everyone has been picked on, ignored or dismissed by others in their life. This creates a dramatic theme that is the hallmark of great musical theatre.

MATTHEW: Can you speak a little about the process of transforming a novel into a play and who is involved?

BENJAMIN: There is no set way to adapt a novel into a play or musical, but the creative team must work as a cohesive whole in order for it to be successful. Usually the script will be adapted by the book writer from the original work. Then the lyricist and composer will decide where music can convey the emotional state of the characters more effectively than spoken dialogue. Lyrics and songs are created and the book writer then cleans up the remaining dialogue to create a first draft. At this point a producer is hopefully found and a reading or production is staged. After numerous re-writes and productions the show is hopefully picked up for a professional production and the show is only finalized after a number of previews.

MATTHEW: There are obviously things a musical can’t do that a movie or a book can, but the reverse is also true. What do you consider to be one or two of these unique features?

BENJAMIN: Inner monologue (as in a novel) can be explored through the lyrics in a musical. This allows the audience to hear what the character is thinking and feeling as opposed to just viewing the emotions or thoughts. Conversely, a movie can have extraordinary special effects, but a musical is limited in what it can portray on the stage.

MATTHEW: Carrie is a forcefully violent and scary movie—does this production try to recreate to some degree that experience for the audience? If so, how?

BENJAMIN: Through the use of the score and lighting effects we recreate the climax in an artistic way without too much horror and gore. If we have done our job, the audience will be experiencing the emotional climax and not worrying about the “Horror Movie” aspects of the scene.

BENJAMIN: Knowing the original source material when watching a musical is not necessary, but often enhances the experience. I always appreciate when I find direct lines of dialogue from the novel or movie incorporated into the songs or dialogue by the authors. There are many instances of this in Carrie even though the setting is present day as opposed to the novels setting.