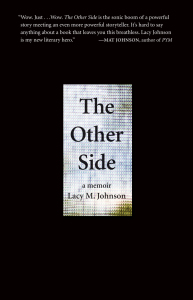 Last week Houston’s literary community was buzzing. Houston writer Lacy Johnson was named a finalist for the National Book Critics Circle Award for her book The Other Side: A Memoir. We are thrilled for Lacy who is an alum of the University of Houston Creative Writing Program and a former recipient of an Inprint Fondren Foundation Fellowship. Lacy now serves as University of Houston Cynthia Woods Mitchell Center for the Arts’ Director of Academic Initiatives. We asked Houston writer and University of Houston Creative Writing Program PhD candidate Austin Tremblay to share his thoughts about Lacy and her memoir with us.

“I have something important to tell you” is a familiar lead-in, especially for writers. We might say this to fellow storytellers, friends, family, or the stranger two barstools down, and we might mean that we have good news, a severe warning, or an epiphany. What we will always mean, though, in spite of these variables, is that we have a story to tell. And we think you, storyteller, friend, family, stranger, should listen.

I have something important to tell you: Lacy M. Johnson’s memoir, The Other Side, has been named a finalist for a National Book Critics Circle Award. It is incredibly exciting that this work has received such a nod. It’s a harrowing book, often difficult to read due to the nature of its subject matter. And yet, it’s a heralded book, and difficult to put down. As Johnson’s website describes, The Other Side is “the haunting account of a first passionate and then abusive relationship, the events leading to Johnson’s kidnapping and imprisonment, her dramatic escape, and her hard-fought struggle to recover.”

But the memoir isn’t merely an exploration of abuse or trauma. The genius of this work, and why it seems, for this writer and reader, so important as a nomination for a National Book Critics Circle Award, is that, while it chronicles traumatic experience, it also investigates the very nature of storytelling. As the book unpacks both the desire and reluctance to relay the experience it details, it becomes about the story itself and, also, how that story can be told. The result is a narrative that not only addresses the complexity of trauma, but, perhaps more productively, demonstrates how inconvenient, and yet how important, it is to discuss. This approach to the book also invites readers to actively listen to its story, to engage in assembling the pieces of narrative alongside Johnson.

The genius of this work, and why it seems, for this writer and reader, so important as a nomination for a National Book Critics Circle Award, is that, while it chronicles traumatic experience, it also investigates the very nature of storytelling.

The Other Side has something important to tell you. It’s a work that will likely leave you shocked, entranced, in awe. Its greatest gift, though, will be how it transforms the language of storytelling, that arresting and rewarding invitation that keeps us talking and listening.

The National Book Critics Circle Award winners will be announced on March 12th. Stay tuned, we are rooting for Lacy!

Austin Tremblay, a PhD Candidate at the University of Houston, was born and raised in North Carolina. His work has been featured, or is forthcoming in, Gulf Coast, Smartish Pace, cream city review, Bateau, and other journals. He edits the literary journal Owl Eye Review.