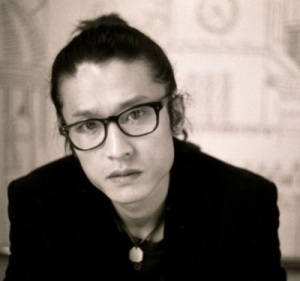 The wonderful thing about literature is that you can travel the world without stepping outside your door. Houston’s diverse literary community celebrates that fact by presenting many authors from different parts of the world.

On Friday, January 22, to celebrate the English-language version of his bestselling collection, Korean poet Kim Kyung-Ju commences his debut tour through the United States at Asia Society Texas Center, in collaboration with Gulf Coast: A Journal of Literature and Fine Arts. Kim will read in concert with his Tucson-born, Seoul-based translator Jake Levine. The multi-lingual program also features Luisa Muradyan and Henk Rossouw, students from the Creative Writing Program at University of Houston (both are Inprint fellowship recipients), presenting translation and transnational work in Ukrainian and languages of South Africa, respectively.

A power house, Kim Kyung-Ju is one of the most distinguished young writers in Korea. His first volume of poetry, I Am a Season that Does Not Exist in the World, has sold over 20,000 copies. He is the author of over a dozen books of poetry, essays, and translation. Additionally, his poetic-dramas have been performed in Seoul and New York. Apart from writing, Kim has curated several art exhibitions, is the organizer of the Penguin Rhyme Club, and produces inter-disciplinary, collaborative projects with musicians and artists. Most recently he took part in the poetic hip-hop project Poetic Justice with the acclaimed Korean rapper MC Meta.

The Boston Review says, “His first book of poems is one of the most popular and successful books of contemporary poetry in Korea…. an achievement not only for its technical innovation and transgressive content, but also for its ability to explore the weight the contemporary world bears on the human soul. Given that we live in an age where our attention is increasingly divided into smaller and smaller fractions of time and the corresponding social problems and anxieties that arise due to new and digital forms of instant social interaction, perhaps there is no more important task for poetry than to ask questions geared toward the eternal.”

We asked the organizer (and beloved Inprint Blogger Erika Jo Brown) a few questions about the event.

Inprint: What inspired putting this event together?

Erika: It was a confluence of inspirations! Literary translation is really hot right now—both academically and for the general reader. There’s a great groundswell at UH for translation studies, generated by students and faculty members, like Roberto Tejada, who just came to UH last year and brought a ton of great programming energy.

The event is also a celebration of independent publishing. The program is primarily featuring the work of Kim Kyung Ju, whose bestselling poetry collection I Am a Season that Does Not Exist in the World was just released in an English-language version by Black Ocean Books. But it will also expose audience members to great new works by radical Korean feminists, like Kim Yi-Deum and Kim Hye-soon

Inprint: Why do you think Kim Kyung-Ju’s so important for Houstonians to be exposed to?

Erika: KKJ is an intriguing writer, because of his cross-disciplinary practice, combining poetry, drama, performance art, and social critique. And while he’s certainly an experimentalist, he has also been lauded by more mainstream pundits, as the recipient of the Korean government’s Today’s Young Artist Prize and the Kim Su-yong Contemporary Poetry Award.

Inprint: What can people expect at the event?

Erika: I know that KKJ and Jake Levine, his translator and collaborator, plan on using performance to “enact” the translation process somehow.

The event will be enlivened and enhanced by considering translation from Europe and Africa, with UH graduate students Luisa Muradyan and Henk Rossouw presenting work in Ukrainian and languages of South Africa. It will be a whirlwind of poetry and language, an engagingly unique evening at the Asia Society, which is such an elegant setting—and it’s free.

For more information on the event, which kicks off at 6:30 pm with a meet-and-mingle with the poets, click here.