29
May ‘17
by Matthew Krajniak
TAGS
Comments 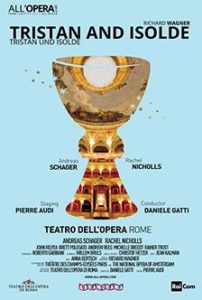 What is it about an age-old story that makes people want to experience it again and again? Certainly variation via content, form, or other means can help, but how many times can a story play this quasi three-card Monte before people’s interests are sucked toward the table up the block?

The answer to this could surely focus on the machinations of narrative or even the socio-biology of humans, or, much more simply, the evident fact that folks love the salacious (like really love the salacious), but one thing is for certain: the phenomenon of a narrative never losing its color despite repeated washings is one that continues to happen. For instance, on May 31st the River Oaks Theatre is having a special film presentation of Wagner’s Tristan and Isolde, a story that has its origins in the 12th century, and, more to the point, has a history of being told and retold that is more varied and alive than arguably any other narrative.

For example, many people know that both the coupledom’s of Lancelot and Guinevere and Romeo and Juliet have traceable genealogies to Béroul’s poem, but it doesn’t take much more than a few keystrokes to find that this classic story of conflicted love has been adapted, reinvented, and collaborated upon by seemingly everyone who has previously experienced it. Within the field of literature alone there are French, Spanish, Czech, Welsh, and Belarusian versions, to name but a small few, that have been tinkered and toyed with by their respective cultures for close to a millennia. And once one gets outside the field of literature, there are no shortages of plays, films, and operas that center their artistic drives on this well-worn material. Are all of these interpretations and iterations masterpieces? Of course not. But some are, and Wagner’s 19th century opera is universally considered as one.

So what does Wagner do that is so original? That, unfortunately, is kind of the point of this post, to let others know that this classic story is being presented yet again—this time via the recent production of respected conductor Daniele Gatti and director Pierre Audi—so that, if one so chooses, he or she can determine for themselves what it is exactly that makes this edition of this weathered story so fresh. After all, who hasn’t seen a version or two of this story to make a comparison?