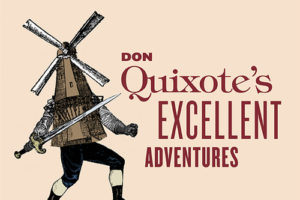 MATTHEW DIRST: Well, to start with there is a lot of great music surrounding this particular subject, from Henry Purcell’s Incidental Music to Don Quixote to Joseph Bodin de Boismortier’s Ballet on Don Quichotte to name but a few. However, in addition to this there has also recently been an important anniversary as this year coincides with the 400th anniversary of the death of Miguel de Cervantes, author of Don Quixote.

MK: What is the creative process for a project like this? How do you pick which music, pieces, etc. you want to incorporate?

MD: First, I look at and listen to a lot of potential music. I then decide which pieces, including just excerpts from larger works—as is the case with Ballet on Don Quichotte—will work best for us, and then finally I figure out both the personnel and a sensible program order and groupings.

MK: In your experience, what do you think were some of the challenges these composers and musicians had in turning a literary text into a musical while attempting to stay authentic to the written word?

MD: If you’re wondering how to turn a literary text into a piece of music, you would do better to ask a composer! If, however, your question revolves more around how a musical program gets put together, it is a bit like cooking in a well-stocked kitchen. First comes hunger, then an initial idea about what to cook, then specific decisions about ingredients and methods. Like all great meals, a great musical program requires both inspiration and skill, a curatorial touch that allows the various “ingredients” to speak for themselves but in a savory and memorable combination.

MK: Will the performance follow a narrative that is familiar to those who know Don Quixote or are the individual pieces organized in a different way?

MD: It won’t follow a specific narrative, but rather it will be constructed through engaging general themes found in Don Quixote, such as endless travel, yearning, foolishness, and so on.

MK: What would you say to someone who is considering attending the event but isn’t quite sure what to expect?

MD: I would tell them that they will get the chance to enjoy beautiful and seldom heard music that was created by a range of 17th and 18th century composers, which include but aren’t limited to solo songs by Henry Purcell from his Incidental Music to Don Quixote collaboration to selections from George Phillip Telemann’s orchestral suite, which was inspired by the Don’s exploits.