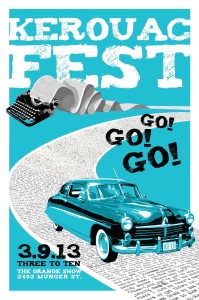 We all have favorite books—books that change the way we think, books that expand our sense of the world, and books that help us understand the meaning of life. The authors of those favorite books become our heroes. They become who we look to and revere.

Now, can you imagine organizing a festival to celebrate that author? A few weeks ago we met with the organizers of Kerouac Fest 2013, Stephen Gros and Tanyia Johnson. Yes, you heard me right, a festival celebrating Jack Kerouac.

Kerouac Fest 2013 takes place on Saturday, March 9, from 3 – 10 pm at the Orange Show Monument. For tickets and other details click here. We asked Stephen to answer a few questions for us, and he was kind enough to do so:

Inprint: How did the idea of Kerouac Fest come about?

Stephen: Years ago I tried organizing a marathon reading of On The Road read by local poets and writers. My friend Michael Hoerman had been involved with one in Massachusetts where Jack is from and he gave me the whole thing timed out. That reading never materialized, something about getting poets to commit to an 18-hour event just wasn’t going to stick. It wasn’t the right time.  So I filed that away and moved on to other things.

A little over two years ago, Tanyia Johnson and I started doing events together. After the success of the FotoFest Special Event, FabriFaction, and the biggest Word Around Town tour yet in 2012 we were looking to branch out. Tanyia had fallen in love with the Art Car Museum and wanted to do something with them involving cars or travel. Of course I instantly came back to On The Road. We got the Orange Show involved as a partner and sent a message over to the Art Car Museum. They said they loved the idea but thought the event was too big for their venue. That was just the inspiration we needed! We moved the venue to the Orange Show Monument and brainstormed ways to make KerouacFest even bigger!

Inprint: Have people in other cities organized a Kerouac Fest? If so, have you ever been to one?

Stephen: In Lowell, Massachusetts, where Kerouac was born, they have a great event every year called Lowell Celebrates Kerouac. It’s by far the biggest celebration of Jack and his writings in America. During our research for the event we were surprised to find out that it’s pretty much the only game in town.  There aren’t any similar festivals in Texas let alone Houston. Chris Carmona puts together a wonderful event called the Beat Poetry Festival that will be held this year in Edinburg. There are similar Beat themed events around but none focus exclusively on Kerouac. I’ve performed my poetry at the Beat Poetry Fest for the past two years but have yet to make it to Lowell for their celebration.

Inprint: What can people expect at the event?

Stephen: We’ve got an extensive lineup of interesting programming planned for KerouacFest:Go!Go!Go!. From nationally recognized poets performing their work to a panel discussion involving famed writers and educators to Inprint’s own Poetry Buskers and a never before attempted crowd sourced poetry experiment using Twitter, there’s plenty to see at KerouacFest. Plus there will be live Jazz from the Cory Wilson Trio and the Free Radicals, music by DJ Black Slacks, live printing by Black Swan, selected readings from On The Road and a slideshow of photos courtesy of the Allen Ginsberg estate and Carolyn Cassidy. We’ll also have free beer provided by St Arnold’s and great food available from Ladybird and Porch Swing Desserts, so there’s a lot to be had for the small ticket price of $15 at the door or $10 in advance on the Orange Show’s website.

Inprint: Is this going to become an annual celebration?

Stephen: We certainly hope so!  A lot depends on how well this year’s event goes and whether we can secure funding to do it again. We’d love to have the support and sponsorship to make KerouacFest Houston’s premier annual literary event!

Inprint: Why is celebrating Jack Kerouac important to you personally?

Stephen: For me it started with On The Road at a very young age. Like a lot of people, reading Kerouac literally changed my life.  It changed how I think, how I perceive literature, it influenced how I write and how I speak.

For me it started with On The Road at a very young age. Like a lot of people, reading Kerouac literally changed my life.  It changed how I think, how I perceive literature, it influenced how I write and how I speak.

Jack’s books painted everything in lavish color and instilled in me the same mad frenzy of awareness he wrote in his characters. Something as profound as that deserves to be celebrated. It’s a shame there wasn’t already an annual festival in Houston devoted to the man, but we’re happy to establish one! See you at the Festival!