Whitehead proceeded chronologically to his teenage years during which he “wore black and smoked cigarettes…but never touched a computer.” He discussed his big break in journalism, observing that he wrote the “definitive think-pieces on Growing Pains and Who’s the Boss.”

He described listening to top 40 disco early in his career as “the rejection slips began to accumulate.” Whitehead then cheekily pushed his phone up to the microphone playing Donna Summer’s “MacArthur Park,” including the nonsensically-symbolic lyrics:

All the sweet, green icing flowing down
Someone left the cake out in the rain
I don’t think that I can take it
’cause it took so long to bake it
And I’ll never have that recipe again 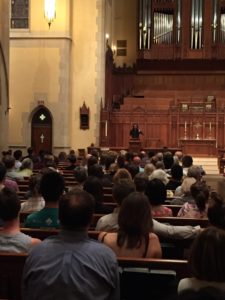 He recalled beginning to “accumulate sketches about rush hour or the subway” as a side project decades ago. Influenced by poets and writers like Walt Whitman, Allen Ginsberg, and John Dos Passos, his writing “paid tribute to his hometown.” Then 9/11 happened, and people had to “figure out how to live in the city after it’s been damaged.”

He read his lyrical essay “City Limits,” with elements of lament and eulogy and rich descriptions of the city before 9/11—and its rebuilding. After this reading, Whitehead also mentioned his fond memories of Houston, having taught at UH in 2002

Finally, Whitehead addressed this year’s bestselling, buzzy novel The Underground Railroad. He related how he had been mulling over this “highly impractical idea” since fourth grade. When he began to flesh out his speculative concept of a physical underground railroad in earnest, he first consulted with his wife. She gently teased him about the drafts he had been working on, encouraging him in this new direction: “I don’t want to say that your novel about a middle-aged writer in Brooklyn is dumb per se…” After checking with his agent, therapist, and editor, in that order, he set out to write.

White read briefly from the section on Arnold Ridgeway, a Southern patroller turned slave bounty hunter. Whitehead paused to note how the idea of authorities figure stopping people for “their papers” has resonated for minority communities. “It was the same idea,” he pointed out, “as Donald Trump demanding to see Obama’s birth certificate.”

There was a thoughtful and mercifully brief Q-and-A afterwards, in which way Whitehead announced to the general joy of the public that The Underground Railroad had been optioned for a 7-8 episode miniseries.

For a man who memorably compared the global impact of a single writer to “a microbe on a gnat in the butt of an elephant,” Whitehead certainly seems to have moved, educated, and inspired this Houston audience, who continue to look forward to his charm, intelligence, and verbal deftness for years to come.