When any great loss occurs, we need time and a way to process that loss. It’s difficult enough when one loses a beloved car or musical instrument, photos, books, a favorite chair – but when one loses all of it at once – one’s house and nearly everything in it – and when whole neighborhoods are inundated, the loss becomes one that all of us in the region must process, either directly or indirectly. It’s as if there is a toxic gas release or poisons in the water – the malaise affects us all, in one way or another.

There is also the matter of processing the grief that follows loss. Even though this is a different sort of grief than the loss of a family member or friend, still one is haunted by what is missing, or what happened down the road (especially in the quiet hours of the night, when one has time to reflect).

To demonstrate the way creative writing—some unleashing of the unconscious—can help after Harvey, a few weeks ago, at an Inprint Board of Directors meeting, after we were officially adjourned, Cait Weiss Orcutt—a poet, Inprint C. Glenn Cambor/MD Anderson Foundation Fellow, experienced writing teacher, and PhD candidate at the University of Houston Creative Writing Program—led us in a writing exercise to show how one might write creatively in response to trauma, and emerge from the experience both slightly relieved and with a text one might expand upon, and perhaps eventually share with others.

Cait—who  teaches for Inprint, Writers in the Schools, and UH—asked the group to write the first word that comes to mind in connection with each of the five senses (sight, sound, smell, touch, taste) and then gave each person a card from special deck of cards. Each card bore a haunting image and a single word (my card, for example, showed a skeleton of conjoined twins, with their heads looking in opposite directions and flowers at their feet, and the word “separation”). Using these potent elements, we were to write something about our experience of Hurricane Harvey, whatever that was – in the midst of it, or from a distance. After five minutes of writing time, several folks read their pieces aloud – improvisations, or, as Cait said, possibly the beginning of something that we might continue writing and exploring on our own.

Here are what several of the Inprint Board and Advisory Board members attending the meeting came up with – thanks to all for sharing these improvisations, which reveal some honest engagement with what has been preoccupying and afflicting us, both individually and collectively. We’re grateful to Cait for taking us through the process, and giving us a glimpse of what we’re capable.

(A footnote from Charlie: When the hurricanes come, I crave the most primitive comfort food of all – Baken-ets Hot & Spicy Chicharrones. Must be a South Texas thing.)

A storm is coming.
We know because we’ve learned to believe
the warnings and watches.
Soon the dirty side of the eye
will be watching us.
We yank all the bread off the shelves
and buy all the water we can before
the water comes, before
the first swirling gust of wind
spanks us into submission.
Those who have forgotten
will soon remember:
water always wins.
Now the light is gone and
the houses suck up the floods
like so many thirsty animals.
Gluttons, they are,
for punishment.
Now the eye has blinked
and finally closed.
The watching is finished.
We have never felt
so exposed.

The devastation you brought
allowed the caring in me
to not focus on your howling wind and damaging rain,
nor on the pungent smell of mold,
but to temporarily delight in the availability of frozen and canned food
that will soon be replaced with fresh
lovingly pollinated
by bees bringing anticipated relief to those you harmed with your storm. 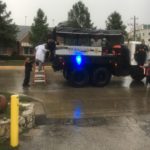 The storm flew into our lives like bats flying at dusk…thousands of them screaming.  It was an omen: destruction.

At the hospital patients’ hearts were in need of repairing, and so life would continue.

But outside on the streets and in the homes the monumental flooding caused overwhelming destruction.

(Rachel’s husband, Dr. O. H. “Bud” Frazier of the Texas Heart Institute, was brought to the hospital on a police rescue truck during the hurricane (see photo). Rachel reports: He stayed up there four days and nights because of the flooding. He was mending hearts! She is currently cleaning out her 101-year-old mother’s house in Meyerland, which took on 3½ feet of water in the 2015 Memorial Day flood, and 5 feet of water in Harvey. Her mother, fortunately, wasn’t living there for Harvey.)

I left the crying, the half-finished puzzle, with salt on my cheek, to do a minor good deed, and also to smell the rain and see its debris, to explore the indifferent torrents that could have separated us from a new life, had it not been for Pythagoras and his theorem.

(Andy writers: The backstory is that my daughter Eloise was due to be born on August 25th, the day Harvey hit.  Fortunately, my wife Caroline is a math teacher (and overall math nerd!), and she had, many weeks prior, convinced her doctor to move the due date (a scheduled c-section) to August 15th, because 8/15/17 is a Pythagorean Triple (a^2 + b^2 = c^2), and evidently quite rare as far as dates go.  So, instead of trying to get to the hospital and deliver Eloise in the middle of the storm, we were all safely at home, doing puzzles and suffering only from stir craziness, and we have Pythagoras to thank!)

Scenes of unimaginable devastation flashed across the television in real time – rains washing away years of accumulated memories, faces of desperation and fear.  But there were also glimmers of hope, as first one story and then another emerged – stories of caring and compassion: arms linked together in a human chain, pulling a stranger from raging waters – a lost dog, carrying an oversized bag of dog food in his mouth, rescued and reunited with his owner through a Facebook post.  As I watched it all, I ate to silence my fears – boxes of crackers – tasteless and dull, a temporary distraction from the reality of what I would find when I returned:  neighborhoods of  gutted out houses, the smell of mold and trash, the occasional whir of helicopters circling overhead, still looking for lost souls.  In the end, though, hope prevailed – a major triumph over fear, and continued faith in the beauty of the human spirit.