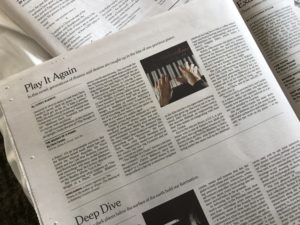 Houston author Chris Cander’s “Dispatches from Book Tour,” a multi-week blog series of reflections and updates along her 17-city U.S. book tour for her new novel The Weight of a Piano (published by Knopf), continues with Dispatch 8 from Washington D.C..

Sunday morning, in Washington D.C., I rushed down to the hotel lobby to pick up copies of the New York Times and the Washington Post, both of which ran their wonderful reviews of The Weight of a Piano. The day could’ve ended happily right then, but it was just the beginning of what would be one of the best of the tour thus far.

My sister Sara, whose birthday is today, had joined me for the weekend, so naturally we had cupcakes for breakfast. The reading at Politics and Prose, which is one of the 6 stores to choose The Weight of a Piano for their Signed First Edition Club, was at 1 pm—early  enough to satisfy those who are both book lovers and football fans. My agent 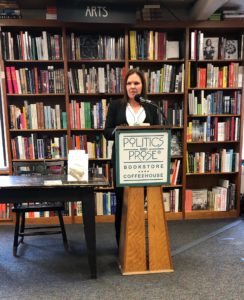 was there, as was my publicist, and a packed house of wonderful readers. I read from two sections of the book, including a scene in which Katya, the Soviet concert pianist, and her husband are discussing whether to emigrate to the U.S. After the reading, a little girl about 8 years old stood up at one of the microphones to ask the first question: “What kind of music would Katya play once she got to America?” I loved that question, and even more that she had the curiosity and confidence to ask it. Attendees aren’t always comfortable with the exposure of standing up from their seat and walking to a microphone to ask a question, but the others must have been inspired by her moxie because a lengthy and interesting Q&A session ensued.

Afterward, there was a party hosted by my agent’s amazing parents, Deborah Ashford, who’s long served as lead counsel on the PEN/Faulkner board, and Kevin Klose, who was president of both NPR and Radio Free Europe. Everyone was as kind as they were intelligent, and I loved meeting so many wonderful people. Deborah had a cake made with the image of the book’s cover, and put a candle in it so we could sing happy birthday to my sister.

Later, Kevin drove us to the U Street Corridor, where we dined at Le Diplomate, a charming rendition of a Rive Gauche bistro. After a lovely Bordeaux and several small plates, we were sleepy, but with all the memories of such an ideal day still fresh, only reluctantly did we return to the hotel and go to bed.

One thought on “Dispatch 8: Chris Cander and The Weight of a Piano go to Washington D.C.”