Earlier in the day, Moten delivered a talk on “Hesistant Sociology: Blackness and Poetry” at the University of Houston. There too, he employed musical epigraphs. One was a recording from a section from Zong!, the innovative masterwork by M. NourbeSe Philip, which linguistically and phonetically deconstructs the legal ruling of slave ship sailors who threw 150 humans overboard in the middle of the Atlantic Ocean in order to cash in on lucrative insurance. The other was a solo Thelonius Monk practicing his tune “I’m Getting Sentimental Over You.” 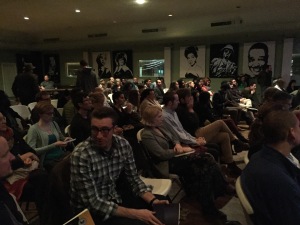 During the recording of McRae’s song, audience members were riveted, spread over rows of folding chairs or on leather sofa flanking the ballroom. Moten didn’t dwell too long over his decision to use audio recordings or explain their significance. To invite other voices, particularly other generators of black American culture, showed his work as in conversation with other forms and ideas.

Moten’s poetry is sharp and twisting, clever and solemn. The experience of hearing it read out loud, in the poet’s own rich baritone, is difficult to describe. (You may read that as a couched suggestion to seek out some recordings yourself or to hightail it to a reading of his the next time the opportunity presents itself.)

Moten read selections from his newest work-in-progress. In one section titled “See No Boogie,” Moten described his generating principal as an experiment “with a certain set of sounds.” In this case, it was “oo,” as heard in the words he blended like “new,” “refusal,” and “groove.” During this part, the rhythm, speed, and variety of his delivery approached scatting or onomatopoetic representation. This seeming-insouciance is counterbalanced with sophisticated phrases of scholarly specialization, such as “neocolonial circuitry,” and “appositional swiftness.” Another layer of syntactical vernacular (“we up in here”), illustrated the swings in tone and register necessitated by code-switching.

Other times, Moten’s words were plainspoken and meditative, such as the lines: “maybe poetry is what happens on the bus between wanting and having,” included in a poem obliquely written in the persona of one of Michael Vick’s dogs. Occasionally, his use of repetition and riffing, of popular and marginalized cultures, called to my mind poet Harryette Mullen.

Moten’s scope of reference points is kaleidoscopic, encompassing the Obama White House, the Gullah Geechee culture, parenting and elementary school bullying, the Charleston church shooting, Bessie Smith, Theodor Adorno, a Salvadoran corner store, Andrea Geyer, Don Cornelius, and Rev. Louis Farrakhan’s numerology. At one point, he asked: “Is there a rivalry or union of variables?” To which the answer seems complicated, shifting, and ultimately affirmative. In Moten’s poetry, “ethics and aesthetics” are constantly in sonic play and intellectual evolution.