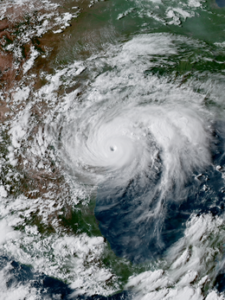 This is the final entry in a series of micro essays on Hurricane Harvey by participants in Inprint’s nonfiction workshop led by poet Cait Weiss Orcutt. She says, “Each piece serves as a proof of our city’s resilience—you can give us rain, wind, uncertainty and days of isolation, but as soon as we can find a pen, we will turn that into art.” For her full introduction and the first essay in this series, click this link.

When you weather a storm as a couple you cannot freak out about the same things. There must be a yin and yang to the crisis. A delicate balancing act where one spouse stays calm and convinces the other one to relax without uttering the word, relax, because that will immediately escalate the situation into a full-blown, code red, Cat 5 catastrophe.

It is Sunday morning – the day after the pummeling deluge of Hurricane Harvey’s rain bands. Our home sits near the hike and bike trail leading to White Oak Bayou and my husband has been monitoring the water’s rise throughout the storm. In addition, he is keeping a watchful eye on the end of our street where the road meets I-10, which is now filled with eight lanes of water instead of traffic. I do not accompany him on these missions knowing that he will provide a full report with photographic documentation. Unfortunately, he returns from his afternoon outing with a high level of concern.

According to my husband, the water has risen since this morning’s briefing and was now pooling closer to the curb. Although he didn’t say it, I knew he was thinking that it was only a matter of time before the floodgates opened and white-water rapids consumed our street. I casually inquired whether anyone else had noticed this development. My husband replied yes but no one else seemed to care. But he cared. He cared enough to start eyeing our downstairs furniture and calculating how long it would take to move all our stuff to higher ground.

I didn’t want to hear this or think about it. The previous day, I had my own meltdown during our first ever tornado drill in the closet where I became obsessed with the exact details of how we would get on the roof with our 57-pound bulldog in tow. My husband had successfully talked me out of that doomsday scenario and now I was faced with doing the same for him. In my mind, there was enough distance from the water to our home and, as a practical matter, we lacked the appropriate number and size of aluminum cans needed to prop up our dining room table. I suggested that he inform our neighbors of his discovery – you really should warn them. I was desperate for a second opinion that wasn’t so dire. In the meantime, I agreed to move our treasured possessions out of harm’s way which included approximately 100 record albums. (Note to self: Discard duplicates – do you really need two copies of the Grease and Xanadu soundtracks?) Low-lying books and knick-knacks made their way to safety by the armful in what I referred to as storm cardio workout. What else did we have to do?

My husband had talked to the neighbors. One neighbor was oblivious to the interstate’s transformation into a waterway and the other one was unimpressed by my husband’s theory. The rain had suddenly let up so we seized the moment to walk the dog. As we marched along the soggy sidewalks, we stopped to say hello to another neighbor – a lifelong resident of the area who began regaling my husband with Tropical Storm Allison tales of jet skis cruising down the freeway. Most importantly, he mentioned that the water level back then was much, much higher and none of the houses flooded. A smile appeared on my husband’s face much like mine the day before when I realized we wouldn’t need to climb to safety. We walked back home in perfect two-part harmony.