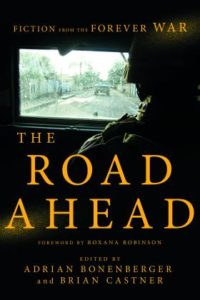 As many of us know, writers are the true chroniclers of our history. Through their written pieces we learn about the complexities and varied lived experiences of a particular time and place. And often times—more than facts and figures—the stories, voices, challenges, and emotions of a character or a scenario stay with us long past the written piece has ended.

On Thursday, Brazos Bookstore presents a panel discussion about war fiction with three contributors to the 2017 veteran fiction anthology The Road Ahead: Fiction from the Forever War. American troops have been on the ground in Iraq and Afghanistan for over a decade. This anthology, including the stories of more than 20 diverse veteran writers, gives readers a look at the aftereffects of the war, a war that continues on today. Kirkus Reviews calls it “an anthology of stories covering a literary terrain as expansive as the seemingly endless ‘war on terror’ that spawned it. These stories provide plenty of revelation on the nature of the war and the soldiers who continue to fight it.” According to Task & Purpose, the anthology “captures the truth about war better than nonfiction. It’s possible―likely even―that these pages from a handful of writers will come to define the warrior perspective for this generation. For that reason, this book is relevant. Its stories are tragic, moving, violent, and devastating, but not always in the ways one expects. It’s enough to enlighten those most insulated from the war.”

We asked Michael Carson, one of the contributors to the anthology who will be at Brazos on Thursday, a few questions about this project.

INPRINT: Can you tell us how the anthology came together? Was it conceptualized by authors Adrian Bonenberger and Brian Castner? Did the contributors all know each other in advance?

MICHAEL: Sure. Adrian and Brian came up with the idea. Adrian likes to say how much he admired Fire and Forget: Short Stories from the Long War, published in 2013 (we all did; it’s an impressive anthology). But with the war in Afghanistan still continuing—and showing no signs of slowing down even now—and the rise of ISIS in Iraq, Adrian and Brian felt the need for a new kind of anthology, one that reflected the diversity of women and men fighting these wars, and the fact that these conflicts don’t have a neat bowtie ending point for either combatants here in the States or those in Iraq and Afghanistan.

Very few of us knew each other personally. Part of the idea behind the anthology was to introduce readers to the incredible diversity of voices within the U.S. Armed Forces. We also wanted to get away from the boy’s club atmosphere sometimes associated with war stories. Brian and Adrian did what they could to seek out unique and often unheard voices. Consequently, many of the writers in the anthology actually met during the compilation process.

Part of the idea behind the anthology was to introduce readers to the incredible diversity of voices within the U.S. Armed Forces. We also wanted to get away from the boy’s club atmosphere sometimes associated with war stories.

INPRINT: Are most of the contributors to the anthology experienced writers or is this the first time they are being published? And what about you, do you come from a writing background?

MICHAEL: I would say about half and half. Writers like Elliot Ackerman, Kayla Williams, Benjamin Busch, and Matthew Hefti have published novels and memoirs to critical acclaim. Some, like Thomas Gibbons Neff, Alex Horton and me, have backgrounds in journalism or liberal art disciplines but are relatively new to fiction. Still others work in fields that have nothing to do with fiction, literature, or writing, but were compelled by their experiences and reading to tell stories. Relatively few of us come from MFA programs. We admire what these programs can do for young writers but also feel that there is much to be said for literary voices shaped outside academia.

Relatively few of us come from MFA programs. We admire what these programs can do for young writers but also feel that there is much to be said for literary voices shaped outside academia.

INPRINT: Can you tell us about Thursday’s event? Will there be a reading from the anthology or is it more of a discussion and Q&A?

MICHAEL:  Thursday will be a discussion of The Road Ahead and writing about war. Brian Van Reet, author of the 2017 Spoils, a novel about the Iraq War and contributor to the 2013 Fire and Forget—will be interviewing Brian Castner, one of The Road Ahead’s two editors and author of The Long Walk: A Story of War and the Life That Follows and Matthew Hefti, author of A Hard and Heavy Thing. I will be there too of course. I’m not sure where the conversation will take us but I do know if you’re interested in fiction, war, or fiction about war, this event will be well worth your time.

For more information on Thursday’s reading at Brazos Bookstore and to buy a copy of the anthology click here. The event is free and open to the public.