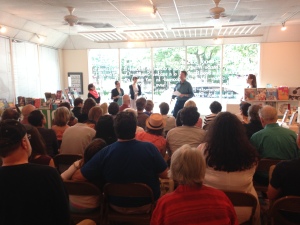 On a sunny, breezy Friday, we few, we happy few, we band of brothers gathered at Brazos Bookstore to celebrate its partnership with the Houston Shakespeare Festival (HSP). This summer, the bookstore is hosting a series of Bard-tastic events, including dramatic performances of Shakespeare’s sonnets and soliloquys, and two informal book club gatherings that offer a sneak peek into HSF’s repertory productions of Macbeth and The Merchant of Venice.

The first event, all about sonnets, was emceed by Jim Johnson, HSF executive director and UH professor of voice and dialects, who presented a theatrical dish fit for the gods. Throughout the evening, he also explicated interesting tidbits for the audience’s edification.

Readers included Suzelle Palacios, a BFA alumna from UH, who’s heading to the Old Globe MFA program this fall; Kat Cortes, a current MFA student at UH, who’s teaching with the HSF conservatory, an intensive two-week program for high school students; Liz Wright, Brazos bookseller, who participated in Wellesley College’s Shakespeare Society for four years; and Carolyn Johnson, Houston-based actor and director, as well as Jim Johnson’s wife, their partnership proving that there is no such thing as too much of a good thing.

The evening kicked off with the classic sonnet 18, which asks the age-old writerly question: Shall I compare thee to a summer’s day? This selection was followed by early sonnets 1 (From fairest creatures we desire increase / that thereby beauty’s rose might never die) and sonnet 2 (When forty winters shall besiege thy brow / And dig deep trenches in thy beauty’s field). Johnson explained that these “fair youth” sonnets expound on the theme of procreation and illustrate that the course of true love never did run smooth. 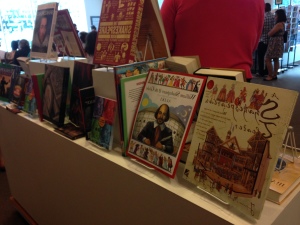 Johnson illuminated parts of the sonnets’ architecture. He described iambic pentameter and gave some insight as to the performer’s metrical choices, since discretion is the better part of valour. He also distinguished the differences between British and American cadences (namely, the latter “tend to fall at the end of their sentences”). Of course, a rose by any other name would smell as sweet, especially when it comes to Shakespeare.

Weary with toil, I haste me to my bed, / the dear repose for limbs with travel tired

Johnson explained how these sonnets follow a problem-solution-summary structure, and presented sonnet 27 (Weary with toil, I haste me to my bed, / the dear repose for limbs with travel tired) as an example. He described how each “tells a complete story in one minute.” Brevity is, after all, the soul of wit. Johnson also spoke of the rhyme schemes in a Shakespearean sonnet. The readers performed a little experiment with alternating rhymes to underscore the shifts and dimensions in sound.

The strong rhyme scheme may have helped the readers, who memorized most, if not all, of their chosen poems. They also showed off their singing chops. One sang a ditty from Twelfth Knight, another from the “music-filled” As You Like It. One reader performed a popular song that was mentioned glancingly in Much Ado About Nothing, elucidating that Shakespeare was a truly a man of his contemporaries, though age cannot wither (him), nor custom stale (his) infinite variety.

As the evening progressed through the themes of love and marriage, two readers joined together for the famous “conversation” sonnet between Romeo and Juliet. The Johnsons described how they worked together and gave each other notes in preparing for this evening. In their household, clearly, all the world’s a stage. The performers were all adaptive to questions and observations from the audience.

Johnson gave kudos to the late Dr. Sidney Berger, a UH professor who founded the Houston Shakespeare Festival 40 years ago.

Johnson gave kudos to the late Dr. Sidney Berger, a UH professor who founded the Houston Shakespeare Festival 40 years ago. Comparisons are odorous, he seemed to imply, but the work of the HSF continues to expand and present world-class theater for free. The organization’s activities benefit a diverse audience who may not have otherwise be given the opportunity to witness first-hand the work of a man who contributed so many common phrases and incisive idioms to our shared language.

Who will believe my verse in time to come / if it were filled with your most high deserts?

The evening closed with meditations from sonnet 17 (Who will believe my verse in time to come / if it were filled with your most high deserts?) and sonnet 15 (When I consider every thing that grows / holds in perfection but a little moment). Guests were encouraged to ask questions to the performers, sip wine, and buy some of the myriad editions of Shakespeare that Brazos offers.

This is the short and the long of it. I’ll see you at the Miller Theatre in August!