Inprint is proud of the work we do to support emerging writers, including giving more than $2.8 million since 1983 in fellowships, prizes, and other support awarded to graduate students at the highly ranked University of Houston Creative Writing Program (UH CWP). This support attracts the best emerging writers to Houston who go on to publish books, win nationally competitive literary awards, enhance our city, and serve as educators throughout the community.

Being a creative writing graduate student, however, isn’t always an easy thing. No high-paying summer internships or corporate recruiters come these students way! And in addition to pursuing their craft, many generously give back to the community, like the great pool of writers at the UH CWP who teach our Writers Workshops, Teachers-As-Writers Workshops, and Senior Memoir Workshops. Without them, Inprint workshops would not be ranked among the best in the city.

Jameelah Lang, a PhD candidate in fiction at the UH CWP, taught a fiction workshop for Inprint this summer. We asked Jameelah to share her experience as an instructor with us. We were blown away by what she said. 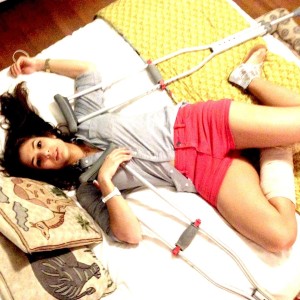 I had a bad go of it last year. I took comprehensive exams, moved into another apartment, and rescued a puppy; my puppy cried without end, the windows in my new apartment wouldn’t open, and Virginia Woolf stalked me in dreams. My students were all too young or too old or too tired to care who Marguerite Duras or the New Kids on the Block were; they wrote about murderers even when I explicitly told them to write about anything but murderers.

The year ended fittingly: I broke my foot leaving my last class of the semester in the least dramatic way possible. I stood up to write a final note on the board and tripped and fell. There was a loud crack. I screamed; they screamed. I limped to my next class. A student carried me out to a security golf cart while they all clapped out of relief or confusion or both. I admit, that part was a little dramatic. They came outside to watch me go, and I felt sorry for myself. I was carted away very slowly, almost comically slowly, on the golf cart, and their faces eventually grew smaller and smaller. And then it was over.

I recently watched a reality show in which men lift weights and take ice baths together in a beat-down gym. In one episode, Richard Sherman shows up practically out of nowhere and says something like, “Before-game butterflies never go away, and if they do, you’re doing something wrong, because you’ve stopped caring.” I was anxious when my summer class at Inprint started, which is nothing new for me. Because I care, I always lay awake the night before a new class starts, my dress pressed, syllabuses readied in neat stacks. I have taught for Inprint three summers in a row now, and each time, I lay awake in half-panic and half-eager-anticipation. But, this time—given the past semester, my foot, the New Kids on the Block, the memory of my students’ faces with their mouths in little o’s of shock and disbelief—I couldn’t sleep at all.

Morning found me, and without knowing it, I had brushed my hair, poured coffee, and walked out the door to face them. My puppy, now a dog, watched me go through a window. I felt totally depleted from the night, the semester, and the year. Suddenly, I was at Inprint, and there they were: my twelve students. They sat around a clean black table drinking coffee from mugs and not talking to or looking at one another. Among them were a surgeon, a psychologist, a teacher, a radiologist, a former Black Jack dealer, and a poet. I sat down and they all turned toward me.

Over the next eight weeks, we performed the usual tasks: we read stories. We wrote stories. We talked about stories. I played the Teacher and they played Students.

Over the next eight weeks, we performed the usual tasks: we read stories. We wrote stories. We talked about stories. I played the Teacher and they played Students. We ate a cake called Gentleman’s Cake. Once, at the end, we held class at a restaurant where many of us ordered avocado enchiladas and one of us ordered flautas. These are the facts. If you had watched us on camera or through a window, this is what you would have seen: us bent over books, us bent over papers, us writing, us talking, us drinking coffee and eating doughnuts, us arguing, us laughing. But something else happened: something deeper and more magical, which can’t easily be seen or observed. I am not a sentimental person. They lifted me up.

I almost didn’t write this. The memory of the summer, of my students, is one I hold dear. I came to them at a time when I felt I had nothing to offer. I wasn’t sure I could write or teach or give anyone anything of any worth at all. In the end, they gave me more than I could ever have possibly given them. I can’t find words to tell you exactly what happened—or how or why. No one will ever know except for them and me, and in this way, the experience was intimate and extraordinary. They have their own stories from the summer, but this one is mine. I wrote it so that you, too, could take a class at Inprint, a place full of such pure magic—and so that you could capture a piece of it for yourselves.

I hold the memory of those weeks like a final drop of water, something vital and fragile, worth savoring. I hold closely the memory of their faces as I left our final class. I left them at a long tiled table in a restaurant, and a song played in which someone sang loudly and with great emotion. I walked away on two feet, and I looked at them one last time. They looked back at me, not with confusion or shock or disbelief, but with kindness and openness and acceptance. And like that, I was a teacher again. And they were my students.

Jameelah Lang is a PhD candidate in fiction at the University of Houston Creative Writing Program, and was formerly Senior Nonfiction Editor for Gulf Coast. Her fiction appears in the Kenyon Review.