May 9, 2013, was Inprint’s official 30th birthday! Executive Director Rich Levy shares his thoughts about what Inprint is most proud of, what excites Inprint as it turns 30, and where the organization wants to go.

Thirty years: we are in a state of astonishment. To be honest, when I took this job 18 years ago, it was difficult to believe that the making and consumption of literature were compelling facts on the Houston cultural landscape—even with a great Creative Writing Program at the University of Houston (UH CWP). And we have done what we can to keep that program strong and to help attract some of the nation’s best emerging writers to Houston: since 1983, our fellowships and prizes to UH CWP grad students have exceeded $2.5 million and supported more than 500 of the nation’s top emerging writers.

That is a meaningful legacy for the city. These writers lead our workshops, and teach in schools and colleges and community centers throughout the region, sharing their work and skills everywhere, on stage and in bookstores and bars and coffee shops. There’s no part of the city or surrounding areas that hasn’t been touched by these writers and their work in the community. 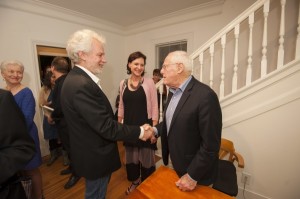 Another thing that excites us is that, through the Inprint Margarett Root Brown Reading Series (in August beginning its 33rd season—it was launched two years before we came into the world by the UH CWP), Houstonians fill downtown theatres for an evening with a literary writer or two. This past season, four of the seven readings were sold out before the night of the event, and we have high hopes for the 2013-14 Series, which we’ll be “rolling out” later this month. The Inprint Brown Reading Series has a season with a real presence here, like the opera or theatre companies or the symphony. On May 6, we presented James Salter at The Menil Collection in celebration of our 30th, as a special event of the reading series. It was a festive night, complete with a great writer, champagne and cupcakes, and it was also great fun to celebrate our presence on The Menil campus, where we’ve been since 1991.

Our writers’ workshops fill up in minutes. (I wish we could offer more of them, but we are constrained by location and an obsession with quality.) Children queue up on a Sunday afternoon for an hour or two to meet a favorite author at our Cool Brains! readings. Different community groups—senior citizens at various community centers, K-12 teachers from throughout the region, children at Project Row Houses, staff members from across The Methodist Hospital—fill workshops to write, to challenge themselves, to say something meaningful, fun, and/or true.

We are incredibly grateful to our donors who enable us to do all this at such a low cost to the public. The Inprint Margarett Root Brown Reading Series tickets are $5 (unchanged since 1980) at the city’s leading arts venues; Cool Brains! readings are free; our writing workshops for the general public cost less than $12 per hour of instruction, while our outreach workshops are all underwritten and free or nearly free. People from all parts of the city, all walks of life, participate in our programming. As we enter the next decade we want to offer these diverse programs in as accessible a manner as possible.

I don’t think the brave visionary souls who launched Inprint ever imagined that the organization would grow as it has and would occupy as meaningful a cultural space in the city as it does.

I don’t think the brave visionary souls who launched Inprint ever imagined that the organization would grow as it has and would occupy as meaningful a cultural space in the city as it does. To our founders, our leaders, our supporters, and most of all to the writers and readers, we offer our thanks for 30 years of literary adventures.

Reading and writing are fundamentally quiet, private acts, and I am delighted that Houstonians want to share their love of the written word, this quietest of art forms, in theatres, workshops, schools, and other surprising venues. We love to join forces with other organizations, kindred spirits, to share this conjuring of something out of nothing—words, sentences, carefully modulated linguistic structures that shake us from head to toe, move us, give us something unforgettable and unique. It’s a gift, and we’re grateful that Houston supports the written word like few cities in the country.