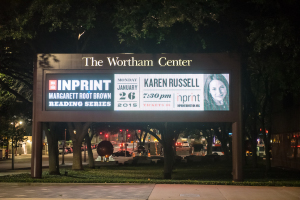 It is not too cold, but she has on black boots and a coat anyway.  She is from Florida.  She and Rich are walking and laughing.  She looks so young to me! I think of how famous this writer has become, and what that must feel like.  The brochures have told me that “Russell was the youngest of the 2013 MacArthur Foundation ‘genius’ fellowship recipients, and she has been included in The New Yorker’s 20 Under 40, the National Book Foundation’s 5 Under 35, and Granta’s Best Young American Novelists.”  As I see her walking and laughing, I think what a big deal she is, but she isn’t acting like it. 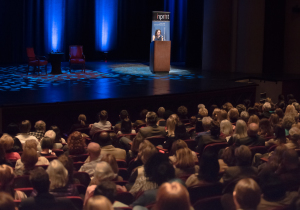 I have told my students that the reading for tonight might involve vampires.  They look up and listen.  Sometimes, I think I might say anything for them to believe me when I say they should see something, get hooked. But I am not making anything up:  her latest collection is called Vampires in the Lemon Grove and Other Stories.  She isn’t being coy:  the first story is about vampires in a lemon grove.

I tell them this writer is doing something new, mixing genres, writing in a fantastical vein in which the natural and the supernatural bleed into each other.  I tell them that even a swamp can be magical if you put your mind to it, and Karen Russell has.

I sit near the front of Cullen Theater—I don’t want to miss anything.  Rich Levy comes to the podium, talks about how the Inprint Margarett Brown Reading series has brought writers from 28 countries to Houston—all of them major award winners.  He tells us Karen Russell is “pure Floridian,” and how her family lost their home in 1992 to Hurricane Andrew.  He reminds us of how powerful the natural world is in her fiction, and I realize how the reality of that tragic storm might have fueled that power.  He notes how Russell makes us aware (in her words) of “the utility of having an expanded vocabulary to talk about the deep weirdness of being alive on any regular Tuesday.” I write this down, hope I get the quotation right, because if an artist can do this, well, he or she has already accomplished something that most of us struggle with our entire lives. 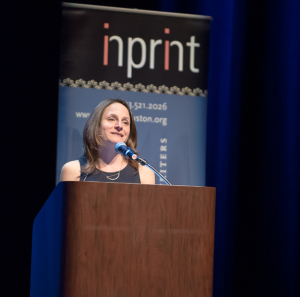 Karen Russell comes to the podium in a sleeveless dress that shows part of a tattoo on her shoulder.  She is amusing, self-deprecating, thanks the audience for having so many people in it, for coming out tonight.  She quips that she has been someone who has “interrupted the sleep of the homeless at Barnes and Noble.”  But, I don’t believe her.

It is her first time in Houston, and she seems really glad to be here.  She tells us that she writes “long short stories,” and that they are like “a 15 year old boy”—“gangly and unmanageable.”  But, I think she protests too much, because her pieces are so readable, you don’t really notice the length. Poe would be impressed. You don’t want to get up and leave the room in the middle of them.  Her refreshing combination of the “supernatural and fantastical” is not just stand-alone weirdness—that is never enough.  She has the requisite lyricism to gain the respect of the reader, even if writing about vampires, you know, regular vampires sorting out what she calls “sort of your standard disputes,” in Italy.  And why not, if the sentences that address the vampire Clyde’s marital anger spell out the “hot, illogical hatred” that sounds poetic, yet, so normal, so familiar, so real.

Russell tells us that the “heat and derangement of her state” and the “eternal happy hour that is possible” in Florida combined with her “weird” siblings have infused her writing in palpable ways.  She tells us of a trip to Sorrento with her family in which she saw a “tan shriveled guy in his suspenders” who was sucking on a lemon.  She says it so simply, that “he looked like a suntanned vampire” to her, and voilà!  Her vampire story was set into production as she tried to “figure out why this was so haunting.”  In the story, “Vampires in the Lemon Grove,” the first person narrator, Clyde, tells us that the tourists are “getting stupider,” and that “They would never guess that I am a vampire.”  The story reminds us that we often don’t see what is right in front of us, which is true, and not so fantastical when you think about it.

No one sees who Clyde really is—due to “benevolent indifference,” the ability of “the sufficiently banal to be hidden in plain sight,” and, maybe, a lack of imagination.  Russell makes us feel like tourists, and we want to smarten up, pay more attention.  Who wants to miss a vampire in a lemon grove?  Hardly anyone.  Hardly anyone you would wish to know.

Russell makes us feel like tourists, and we want to smarten up, pay more attention.  Who wants to miss a vampire in a lemon grove?  Hardly anyone.

Turns out vampire marriage looks eerily like earthling marriage:  with sometime know-it-all spouses who dash your illusions in the tersest of comments.  Clyde’s vampire wife, Magreb, disabuses him of all of his beliefs regarding vampirehood (read manhood) ranging from blood lust to sun sensitivity: “So when did you figure out that the blood does nothing?” and, to add insult to injury, she adds, “You poor thing, believing all that garbage.”  Psychologically, Russell’s vampires are not so distant from us, managing unfulfilled desires in the best ways that they can.  Clyde explains that in the absence of blood, the go-to drink of vampires in most accounts, “These lemons are a vampire’s analgesic.  If you have been thirsty for a long time, if you have been suffering, then the absence of those two feelings—however brief—becomes a kind of heaven.”  Thirst and suffering—they aren’t just for vampires.

Clyde feels a kaleidoscope of emotions for Magreb: love, hate, the wish that she would stop talking, the feeling that she has “ruined” his life.  You know, the usual.  Like us, he has constructed his identity as a vampire around the commonly known ideas about vampirism that he believes, only to have those notions crushed by the knowing Magreb.  Like us, he realizes, our identities are codependent on the dominant narratives that we hear and internalize.  He tells us: “You small mortals don’t realize the power of your stories.”  Russell reminds us of the power of fiction to determine reality.

Forget “Breaking Dawn.”  You are with vampires, but not in the Twilight zone, and not even in the pages or stills of The Vampire Diaries.  In Russell’s supernaturally laced world, you are closer to reality and the tartness of a lemon than you ever supposed.  And you feel the wit of Clyde’s wry line:  “For a vampire, my life was very normal.”  Clyde says he is “mostly happy,” and “making a kind of progress,” uses the tentative vocabulary of almost everyone you know.  “Hunger pangs” become something to manage, not satisfy.  They are “a comfortable despair.”

After the reading, there is a question and answer session with Rice University faculty member and author Amber Dermont, who notes Russell’s “tender understanding of how it feels to be monstrous.”  Russell confesses that she is “drawn to monstrous weirdos” and sees monsters as “difference made flesh.”  She says, “fiction is a wonderful place to contend with these things.”

Dermont asks her about her ability to “mash-up genre,” and embody the characteristics of “Southern Gothic.”  At one point Dermont asks Russell, “Do you marvel at your own imagination?”  It reminds me of when John Updike was asked a similar question years ago at another Inprint reading, and he quipped back, “Well, less and less.”  Russell is equally modest, saying she really exists on “a continuum of embarrassment and relief,” and everyone can tell that she is sincerely grateful for her success, acknowledging “the way luck shapes your fortune,” and telling all of us that she just feels “insanely lucky” for “the opportunity to imagine” and explaining her joy at creating “a dilated reality” to get at “what is unjust in our lives” and “letting that unfold organically.”  It sounds like a formula that is not formulaic, and combines her affinity for the excruciating losses that occur in this world with the imaginative comforts of what can be conjured in the mind:  the results are somewhere between the realism of most American novels and the tradition of experimentation of Hawthorne, Melville, and Poe.  She really is in a liminal place between Realism and Romance.

My favorite comment of the night is when Karen Russell talks about over-parented kids, and how children need “a pocket of neglect to grow strange in” and “some time to weird out.”  I think of how overbooked we all are:  my students, my son, me.  It hits a nerve—the thought that we outsmart ourselves, kill the imaginative payoffs of being alone without an agenda for improvement, without constant supervision.

My favorite comment of the night is when Karen Russell talks about over-parented kids, and how children need “a pocket of neglect to grow strange in” and “some time to weird out.” 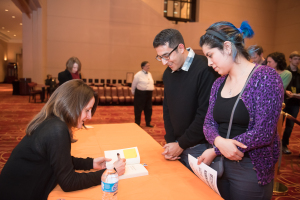 After the question and answer, I go to the front of the line to have my books signed.  Karen Russell is smiling and petite, Florida friendly without being fake.  I tell her I am at the front of the line just because I am blonde:  we laugh.  I tell her that my students have come, that I am teaching Multicultural Literature, that she is at the top of our reading list. I tell her that we are starting with the culture of Florida.  She laughs, signs my books, and tells me she is so happy so many students came tonight.

I walk out into the Houston night: cool and breezy, but not cold.  You could run into anyone, or anything, if you put your imagination into gear. If a reading is any good, you are changed and excited, want to read more.  I can’t wait to talk about Karen Russell’s words with my kids—many of them are writers themselves.  I can’t wait to tell them how her improbable scenarios, her casual inclusions of the supernatural, her insistence of the otherworldliness that infuses our lives, perform their own kind of miracle.  Her writing makes us see life on earth more clearly, dispels confusion.  Russell is so young, so famous now, yet, so down to earth. I think she is in love with the process of writing—she seems resistant to the bait of fame.  She makes the most unlikely of combinations utterly believable.  She imagines that vampires are in a lemon grove, and then, they are.