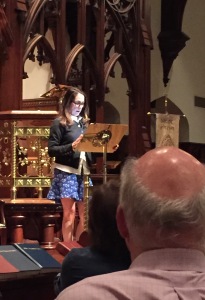 On Thursday evening, September 17th, an audience assembled in a downtown Houston church to celebrate the Word—that is, we gathered to venerate the literary words of Mary Karr, memoirist, poet, and author of the newly released craft book, The Art of Memoir.

It was a rare treat to be in Christ Church Cathedral, with its calming gardens, majestic stained glass, well-worn, worshipped-upon wooden pews, aroma of aged books, and the idea of “ministering” in mind. Through her memoirs Lit, The Liar’s Club, and Cherry, as well as poetry collections Abacus, The Devil’s Tour, Sinners Welcome, and Viper Rum, Karr has concocted spiritual balms for readers, who appreciate her signature wit and honesty.

The event was doubly jubilant, serving as a homecoming of sorts for the Texas-born author and as a launch for Inprint’s new season.

As a Southern storytelling worth her salt, Karr began by drolly reflecting on her genesis as a reader, writer, and social person. “I was a biter,” she joked, of her youth, and “my career goal in high school was to stay out of the penitentiary.” Later, she expounded on her struggle to find her voice: “I wanted to be fancier and go to school at the Sorbonne…not a red-neck from Port Arthur. TX.”

Later, she expounded on her struggle to find her voice: “I wanted to be fancier and go to school at the Sorbonne…not a red-neck from Port Arthur. TX.” 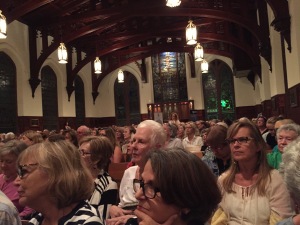 But, as she articulated, “the vernacular of Southeast Texas is hardwired in my body.” As a child, she recalled that the “truth in memoirs tugged at me.” After devouring the autobiography of Helen Keller and I Know Why the Caged Bird Sings, she thought of memoirs, this “outsider art,” with relief and promise, proving that literature did not necessarily mean “men who used summer as a verb and slept with each other’s wives.”

On the meteoric rise of the memoir genre, Karr posited that fiction is moving in a more “dystopian” direction, and so “readers are hungry for the real.” An examined life, she noted, “starts with events and manufactures meaning from them,” rather than the other way around, as she believes other prose writers might.

An examined life, she noted, “starts with events and manufactures meaning from them,” rather than the other way around, as she believes other prose writers might.

She also championed the revision process, in the “radical overhaul” style of Yeats or Pound—revealing herself as a poet’s poet. She likened herself to “a dog with a bone” when she’s revising, admitting that she’s thrown out over 1,200 finished pages and once even broke her delete key. She then read a snippet from the end of The Art of Memoir, on the work of the late writer-mathematician G.H. Hardy, which warrants its own read.

Ultimately, Mary Karr is a keen recorder of the observable world, and I’d be remiss if I neglected to present some the truth-bombs she delivered ex tempore in characteristically snappy one-liners:

The event moved on to a fruitful and productive question-and-answer period with Mimi Swartz, an executive editor at Texas Monthly and former staff writer at the New Yorker. When asked how she switched from autobiographical narratives to a craft book, Karr quipped that, “I’m an old maid school teacher, plus I can be bought” with an agent’s generous offer.

When asked how she switched from autobiographical narratives to a craft book, Karr quipped that, “I’m an old maid school teacher, plus I can be bought” with an agent’s generous offer. 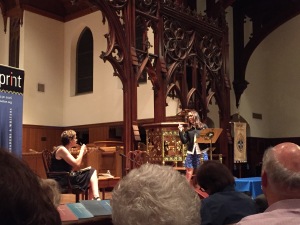 The audience got a kick out of her candor in this reply and others. When asked if everyone has a memoir, Karr assented, first clarifying that not everybody could write a memoir, though “everyone has a rich tapestry of love and hate, joy and disappointment…that Shakespeare filled books with.”

The event then opened up to audience questions, which Karr tackled with grace and aplomb, on topics ranging from her opinion on the Catholic church to her son’s filmmaking practices to interpreting a homeless man rebuffing her offer of a vegan wrap as a “moment of G-d.”

Karr translated specific concerns, for instance, on acting as amanuensis for elderly family members, to more universal literary truths. In defining her style of memoir, she explained that she “tries not to attribute or speculate about other people’s motives,” focusing instead on how she reacted to particular events. Similarly, she delineated how “a journalist would look up an arrest record,” but a memoirist must “trust the pain of your own experience as real.” And, subsequently, trust the reader to assume that the memories of seven-year old may not be entirely accurate.

In the spirit of the church setting, Karr concluded by expanding on her “different methods of prayer,” citing the spiritual exercises of St. Ignatius as especially helpful—all in her irreverent, unabashed way. These centering devices seem to help generate memoirs, helping writers “interrogate the memory.”

Mary Karr’s visit to Houston, no doubt, will be a memory that readers and writers will cherish for a long time.