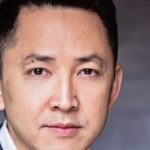 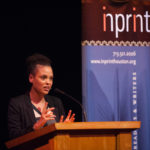 Another of the 2017 MacArthur “genius” fellowship recipients is novelist Jesmyn Ward, who appeared in the Inprint Margarett Root Brown Reading Series in March 2013. You can watch a video here of her reading from her National Book Award-winning novel Salvage the Bones and her conversation with fellow novelists Amber Dermont and Robert Boswell, on the Inprint website in our Archive of Readings. 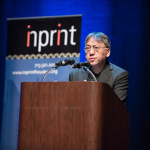 We were also delighted to learn last week that Man Booker Prize-winning novelist Kazuo Ishiguro was awarded the 2017 Nobel Prize in Literature. He appeared in the Series in March 2015 on book tour for his new novel The Buried Giant–-and you can watch the video of his reading and conversation with novelist Robert Cremins here, also in the Inprint Archive of Readings. 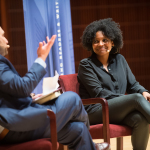 There’s more. Pulitzer Prize winner Tracy K. Smith, who in June was named the 22nd Poet Laureate of the United States, joined us for the Series in February 2016, reading selections from her memoir Ordinary Light and her award-winning poetry collection Life on Mars, and conversing with poet Paul Otremba. You can watch her video in the Inprint Archive of Readings here. 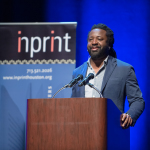 In April 2015, novelist Marlon James gave a powerful reading from his new book A Brief History of Seven Killings–-and then a few months later, the book was awarded the 2015 Man Booker Prize. If you weren’t one of the lucky folks in the theater that night, you can watch his reading and conversation with novelists Cristina Henriquez and Chitra Banerjee Divakaruni–-here in (you guessed it) the Inprint Archive of Readings.

That is what we love about the Inprint readings. These writers, who we work hard to bring to Houston, are not only the literary stars of today, but they are also the literary stars of tomorrow. That’s why we hope you’ll join us for the readings this season, which in addition to Nguyen, include Jennifer Egan & Claire Messud on November 6, Jhumpa Lahiri on January 29, Paul Auster on February 12, Aminatta Forna & Samanta Schweblin on March 26, and Rigoberto González & Kevin Prufer on April 23. After all, there’s something indelible about the writer’s presence, and the immediacy of the reading and interview. And if for some reason you can’t be there, or the reading is sold out, in many cases (if the writer will permit it), these great nights of literary performance and conversation are available for you to watch and listen to anytime in our online Inprint Archive of Readings.

One way or another, we hope to be your companion in literary adventure. See you at the readings, or online, in the Archive!