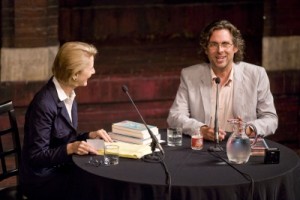 So the end of the world didn’t happen after all, but at least there is a second coming, just not the kind you might imagine. On September 10, 2007, Michael Chabon kicked off the 27th season of the Inprint Margarett Root Brown Reading Series, reading from his book The Yiddish Policeman’s Union—a mix between the detective genre and alternate history. He charmed us all with his dazzling wit and brilliant insight on writing. This year, he’ll do it again. Chabon will kick off the second half of the 2012/2013 Inprint Margarett Root Brown Reading Series on January 28, 2013, reading from his latest novel, Telegraph Avenue. Following the reading, University of Houston Creative Writing Program faculty member, Mat Johnson (author of Incognegro and Pym), will sit down on stage to interview Michael Chabon and talk about Telegraph Avenue.

Before the reading, we thought it would be fun to look back at Chabon’s last visit. Here’s an excerpt from his 2007 on-stage Inprint interview conducted by Fran Fawcett Peterson.

FRAN: One of the themes that comes out in so much of your work and it was particularly evident in these two chapters, which you read, is the father-son relationship and the son trying to live up to the father’s expectations. Could you tell us a little more about that particular theme and where it comes from for you? 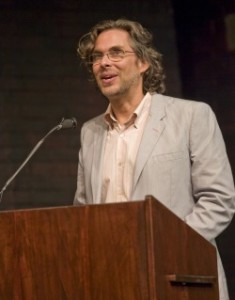 MICHAEL: Well, you’re right. And it does go way back to my first novel, Mysteries of Pittsburgh. And it recurs here and there throughout. I suppose it has something to do with my relationship to my doctor—no, to my father. Chess, for example, is absolutely a legacy, and from my point of view a somewhat dark legacy for my father because he is a chess player, loves the game, is a pretty good chess player, and tried to teach me how to play as a kid. I hated it from the beginning, but at the same time I was fascinated by it, by the board, the history of the game, the pieces. I love reading about the great champions and their really peculiar and fascinating lives. The lure of chess has always been fascinating to me, but the game itself was just painful. He was a terrible teacher. He just taught by destruction, which I think is kind of the way you learn to play chess by having your ass handed to you over and over again. Some people enjoy that I guess, but I don’t. I never thought, ‘gee this chapter is missing some father-son here.’ I never aimed to write a novel about fathers and sons. It was just something I felt. I felt it consistently enough that when it came time, for example, to describe the dead man’s hotel room, in my description, I put a chess set by his bed with an abandoned game. As soon as I did it, it resounded—I thought chess and my dad, the history of chess, the Jews and chess. When it came time for my main character to address chess and what it meant to him, it was very natural for it to have been his father’s great passion and that his father tried to teach him and was a terrible teacher. It was never a conscious thing. It’s never quite unconscious either. It’s somewhere in between.

FRAN: What is the topic of the nonfiction book you’re working on?

MICHAEL: The nonfiction book, when it does finally emerge, is a collection of writings that I’ve done about fatherhood, sonhood, being a husband, being a man in many respects. I think there is a little bit about religion and religious beliefs, but not a whole lot. I think I’ve been trying to claim the heritage of Jewish storytelling. It started from the time when I was a child and read books like Susan Cooper’s Dark is Rising Sequence. They’re books for young people set against this backdrop of Celtic and British mythology. And looking at those books, I was partly wishing I could do the same with my own Jewish heritage. Judaism was presented to me not as a bunch of stories but about laws, truths, prohibitions, things you’re allowed to do, things that you’re obliged to do, commandments—to look at it as a framework of narrative that I do have claim on by inheritance is something I just started working with.

FRAN: Has the detective genre always been appealing to you?

MICHAEL: Well, I am a huge lover of Raymond Chandler. He’s one of my favorite writers. Period. Not just mystery writers. Period. I think The Long Goodbye is one of the best American novels of the 20th century. I’ve loved his work for such a long time. Unlike Conan Doyle that I went away from for a long time, I’d go back to Chandler every few years because that’s what I do with all my favorite writers. The idea of getting to write what I initially conceived of as Philip Marlowe—first person, private eye character—was really appealing. It’s something I had longed to do. It didn’t quite work out in the way I expected. It ended up being a third person narrative and Meyer is not a private detective. He’s a policeman. I was very strongly aware of this shadow of Chandler over me while I was writing this novel.

FRAN: How has having four children, and very young—how has this changed you as a person, you as a writer, and how do you have time to do it all?

MICHAEL: That’s the thing. The way it’s changed me as a writer is that I get a lot less written. I can get my work done. I try to get 1,000 words a day, every day, five days a week. I get them done, but what I don’t get is the sense of immersion, what some psychologists refer to as flow. I don’t have that sense that everything I am thinking, everything I am reading, everything I am seeing, all the things that are happening to me are all connected to my work in some way, with what I am writing at the time. I pick up a newspaper I find the name of a character, I walk down the street I see a guy walking some strange kind of dog that is the exact dog I need that I was just writing about—you get all these synchronicities that only happen when you’re immersed. To be immersed you have to be alone, or almost alone a lot of the time—at least that’s my experience. With children, they just don’t permit you to be alone. Even when you’re alone, you’re not alone. There’s always stuff back here telling you, ‘don’t forget to pick up this or that’ you have to remember all these things. As soon as I walk out of my office, I just, instead of easing into the world around me slowly, have to go and do one thing after another. You’re just rudely pulled out of the world of the book and I rarely have that abstraction where I am back in the book.

So what I have to do is get away. Sometimes I rent a hotel room in San Francisco for three or four days and I just sit down and write.

So what I have to do is get away. Sometimes I rent a hotel room in San Francisco for three or four days and I just sit down and write.

There you have it! Put Michael Chabon’s appearance on your calendar for January 28, 2013 at 7:30 in the Alley Theatre. We hope to see you all there!

Gabrielle Mendieta is an intern at Inprint. She is also a fiction writer and philosophy student at University of Houston. Her work can be found in Glass Mountain and other places. When she isn't writing or helping Inprint, she's usually cycling and drinking coffee--hopefully not at the same time.