It’s another Monday night at the Wortham Center in Houston, and this time I didn’t mess around getting the tickets for the Inprint Reading featuring Michael Cunningham, the Pulitzer prize-winning author of one of the most important books written in a long time, The Hours. Good thing: it is crowded already when I blow in at 7:25, and you can tell people are excited. You can’t blame them: The Hours didn’t just help us figure out how to read Virginia Woolf’s masterful Mrs. Dalloway, and it didn’t just give us another great film with Meryl Streep and Nicole Kidman, who won an Academy Award for her unadorned portrayal of Woolf. Cunningham is speaking tonight on his new novel, The Snow Queen, but, at least for me, there is no getting away from The Hours and lines like these:

Still, there is this sense of missed opportunity. Maybe there is nothing, ever, that can equal the recollection of having been young together. Maybe it’s as simple as that. Richard was the person Clarissa loved at her most optimistic moment. Richard had stood beside her at the pond’s edge at dusk, wearing cut-off jeans and rubber sandals. Richard had called her Mrs. Dalloway, and they had kissed. His mouth had opened to hers; his tongue (exciting and utterly familiar, she’d never forget it) had worked its way shyly inside until she met it with her own. They’d kissed and walked around the pond together….

It had seemed like the beginning of happiness, and Clarissa is still sometimes shocked, more than thirty years later, to realize that it was happiness; that the entire experience lay in a kiss and a walk, the anticipation of dinner and a book…. The dinner is by now forgotten; Lessing has been long overshadowed by other writers. What lives undimmed in Clarissa’s mind more than three decades later is a kiss at dusk on a patch of dead grass, and a walk around a pond as mosquitoes droned in the darkening air. There is still that singular perfection, and it’s perfect in part because it seemed, at the time, so clearly to promise more. Now she knows: That was the moment, right then. There has been no other.

In a novel so closely associated with representing suicides, Cunningham schools the reader about recognizing happiness. This is his exquisite form of subversion: he usurps the reader’s expectations without the snarky irony associated with the development of so many contemporary literary characters. He prefers to keep things literary without pretensions, as in his gestures to Walt Whitman in Specimen Days, his quasi-Jamesian realism in By Nightfall, his Thoreauvian directness in Land’s End: A Walk in Provincetown.

When Cunningham arrives at the podium, he is gracious, and I already like the fact that although he is a Pulitzer Prize-winner, he seems happy to be here, happy to read, telling us that he “still can’t quite believe that I get to do this,” and that he has come to love reading stuff to people even if it comes with “a nervousness I seem to like.” He says reading his work serves as “a powerful reminder of the fact that fiction is meant for readers.” 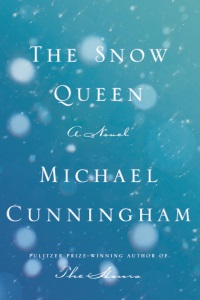 He begins by reading from The Snow Queen. It is a section about a woman deciding about a necklace, “attentive as a surgeon.” But he is not making fun of her—he is reminding us that this is what we do, because what we buy means something to us—represents something about what we want to say to the world about ourselves. He reads some lines that remind me of why Cunningham is such a successful novelist: the simple observations we have about how things are can be profound.

In American culture, it sometimes feels like we are all shopping, all the time, for something. Emma Bovary had to buy a lot of clothes before she moved on to other ways to fill the void in her boring, monotonous, provincial life. But Cunningham shifts the focus of consumerism to ourselves: retail becomes something vaguely philosophical, but not in a pedantic way. It is a means to explain things: “People will either buy something, or they won’t.” Our consumerism represents our sensibilities, our willingness to accept or reject in other categories. Cunningham’s character Barrett Meeks confesses that retail is “essentially an ongoing act of folding,” and it is not lost on the audience that even in the humor of that line that we all fold in some ways at one time or another—until someone can convince us that we “could come here and take a look” at whatever choice replaces the last one.

In the passage Cunningham reads, the woman deciding on a necklace performs a marketplace miracle, saying “I’ve gotten it down to two.” But just when you think the novel might get all preachy and superior about our material inclinations, which might be read as weaknesses, Cunningham subverts our expectations, usurps our attentions, and delivers something so much more wistful and brilliant to accompany the scene: Barrett wants to rescue this woman from more than a fashion faux pas—he want to rescue her from herself. He wants to tell her, regarding her fiancé, “Don’t marry that guy.” He wants to point out to her that she is “still too grateful for his attentions.” He wants her to realize that this guy is “still a citizen of his mother.” He wants to warn her that this guy, this fiancé person, will be “sullen and resentful over crimes you don’t know you’ve committed.” But, even with all of this pitch perfect understanding of a certain kind of female experience that betrays inexperience, Barrett says what we all say when we cannot force ourselves out of our conventional boundaries: He tells her: “Good Luck.”

The second piece is a delicious tease, in that it is a short story called Poison that has not come out yet—and won’t for awhile. Like Hemingway’s Hills Like White Elephants, it seems to be entirely in dialogue, highlighting the control-freakiness of some relationships, the concessions we make to be with another person, how we fake it because we love someone, even if that proves to be “weird” or “disgusting.” The dialogue is a shrine to neediness: “I’m displacing my emotions…” and “This really matters to you…” and “Please don’t condescend…” and “Tell me something you love about me…be specific.” The neuroticism of our self-help-y colloquialisms hits a nerve and we remember Cunningham’s lines even if we hope we never say them: “It’s so you.” Or, “Does it bother you that I like making you happy?” Here, Not Enough is perfectly enough as Cunningham dramatizes our expressions of what we crave from another in a unique scenario that could be a spoiler if I spelled it out for you, so I won’t. But trust me, the rhetoric of neediness alone is worth the read, even if you have to wait until next year to see it.

Underlying everything, in each work, is a compassion that permeates so much of Cunningham’s prose, and he tells us in the Q and A where some of that comes from as he recounts the lives taken by AIDS and the culture’s difficulties in confronting both homosexuality and the cruel ravages of disease. Cunningham remembers the people, mainly men, some of whom were rejected by their families during this time. He is interested in the way that “If your biological family cannot rise to it, you find another one.” He was often part of that kind of family—the new one. He says, “You don’t get over something like that.” This helps explain the empathy that can be traced through his lyric but clear prose, which he describes as “darkish but not hopeless.” 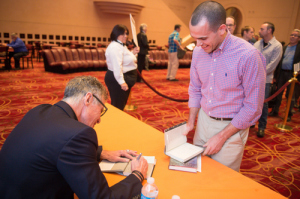 In answering questions, Cunningham covers a lot of territory: the music he listened to while writing books (for The Snow Queen, Patti Smith, Lou Reed, Niko), illness (“cancer is so unpredictable”), love, writing, Emma Bovary, shopping, addiction (it has multiple stories, not just one), Flannery O’Connor, and “veering close to the dark stuff” without being afraid to veer out of it as well. But my favorite thing he says is how he was attracted to The Snow Queen’s gloss on that particular fairy tale because it was one about despair, and how fairy tales in general make us think: “what was that about really?” Cunningham is able to make us do that with representations of every day life as well, making us wonder, even if we buy a necklace, or have a needy conversation, what was that about really? It is an important job to carry out—making people think about that, even if it takes you a minute to realize it, it just seems so direct and real. At the end, he says one of the jobs of the novelist is to make us feels less strange. I think he means less strange to each other, more familiar, less remote, and he succeeds.

I meet Michael Cunningham in the line to sign my book, tell him I teach college English. I tell him I had students read The Hours, and THEN Mrs. Dalloway. He laughs. That is great, isn’t it? Sometimes you have to look at what is more immediate first, then figure out what came before. Sometimes you have to go to a reading, think about why an author’s characters tend to have terminal illnesses, and then you step back, realize we are all terminal, but can say a lot to each other before it is all over. We can veer away from the dark, laugh at what is ironic, without being too adolescent about it, and go ahead and ask “what was that about really?” Then, it seems less strange.