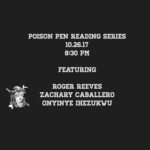 When I first moved to Houston from northern California, the city surprised me in so many ways. It’s easier to be a vegetarian here than it was there, and y’all got great bourbon lists at your restaurants and bars! Especially at Poison Girl, host to one of the best reading series in town. This was my favorite surprise: Houston’s vital, thriving, and progressive literary scene.

But not everyone knows about the award-winning Poison Pen series, which runs the last Thursday of every month. This month’s reading takes place on Thursday, October 26th, and will feature Roger Reeves, Onyinye Ihezukwu, and Zachary Caballero.

In an effort to introduce the larger Houston community to Poison Pen, I sent some questions to the series’ current organizers, all of whom are writers themselves, as well as past or present Inprint Fellows: Giuseppe Taurino, Analicia Sotelo, and Erika Jo Brown. These folks vet authors and schedule line-ups to bring new, exciting work to Houstonians. 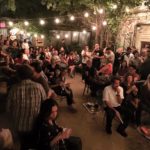 CHARLOTTE WYATT: What makes Poison Pen unique from other readings in town?

ANALICIA SOTELO: What I like about Poison Pen is that even if people aren’t at Poison Girl that night for anything other than whiskey or a Tinder date, they can come upon literature read by contemporary authors in a setting with writers and non-writers alike.

CHARLOTTE: How do you decide which writers to feature in the series?

ERIKA JO BROWN: We decide through a secret algorithm, taking into account genre, book-having-ness, community leadership, and phases of the moon.

CHARLOTTE: Fair enough. What made you decide to become involved with Poison Pen? What is your role in the series?

GIUSEPPE TAURINO: I was approached by Greg Oaks, one of the original founders, as he was contemplating “retirement.” I’ve known Greg since my graduate school days at UH, and saw the series come to life and grow under his and David MacLean’s, and Scott Repass’s, and Casey Fleming’s and Jameelah Lang’s and Mat Johnson’s (am I missing anyone?) guidance. As a regular attendee (I’ve also read three times), proud UH Creative Writing Program alum, and active Houston lit community member, I’ve also admired the series and its ability to bring diverse readers and community together.

ANALICIA: I think what drew me to Poison Pen initially was its founding team – they were down-to-earth, weren’t afraid to say whatever at the mic, and were crazy encouraging of the readers. There’s this misconception that literature is something left to the care of English classes, but it’s alive and well in this city. And it’s fun to hear read aloud.

ERIKA: I was tapped by Greg Oaks and Jameelah Lang. They mistook my natural effervescence for competence. I like to think I am the beauty of the operation. That’s certainly not Giuseppe. I’m always scouting for interesting performers from the local community, and also help hook up CWP-ers.

GIUSEPPE: Erika might be the beauty of the operation, [but] I consider myself the middle-aged eye candy.

CHARLOTTE: You are all beautiful. … What do you like best about the venue at Poison Girl?

ANALICIA: It’s classic Montrose Poison Girl, with the naked ladies on the walls, pinball machines, and the Kool-aid man out back. I like that you have to read louder and try harder to be entertaining than you would in a quiet reading space. I like when people laugh at funny lines, because literature can be really funny. I like when people become still as soon as a once funny story becomes deep and real and tragic. The entire reason most of us got into this world is because we all laughed or cried or laugh-cried at something someone wrote once, right? Poison Girl is a great home for that reminder.

CHARLOTTE: Do you have a favorite reading or reader so far?

ERIKA: Hands-down, [it] has to be our most dysfunctional as well. We did a reading celebrating the original founders [and] Mat Johnson railed at the rain like King Lear in the storm. David MacLean flew down from Chicago and said he didn’t care if we all got electrocuted, he would read his fiction snippet. It was exhilarating. You kind of had to be there.

CHARLOTTE: What should folks know about the reading upcoming on the 26th?

GIUSEPPE: That the reading will be lit, as the kids say. We’re going to raise roofs, and wave hands, and try our best to keep our clothes on.

In all seriousness, we’re featuring a renowned spoken word artist and educator, a 1st year PhD student at the University of Houston’s Creative Writing Program — who comes to us, most recently, from the Stegner Program at Stanford — and, in my estimation, one of the best American poets writing today. I could go on and on about their individual accolades, but mostly, I’m excited to introduce our lit community to such an exciting range of voices. I think regulars of the series will leave this month’s reading feeling energized, nodding their heads, saying, “Damn, what a lineup,” while first timers will get a great sense of who we are as a series and what we work hard to bring to the table.

To learn more about the reading on October 26th, and the featured readers, click here.