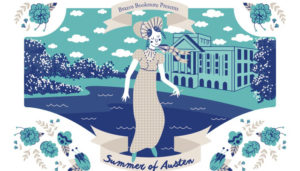 On June 9th Brazos Bookstore will kick off its Summer of Jane Austen celebration with a party and a screening of Persuasion at the Museum of Fine Arts, Houston’s Rienzi House. The screening is just one of nearly a dozen events Brazos has lined up from June through August to commemorate the ever-popular author and the 200th anniversary of her death. And, undoubtedly, Ms. Austen should be celebrated with her wonderfully mordant humor, pioneering of Realism, use of free indirect discourse, and focus on strong female characters.

However, there’s something about her that other historically-renowned authors—and even other timeless artists, politicians, and scientists—don’t have, and that’s namely the continued ability to enamor the public. She simply has a quality that gets at us, which makes us want to celebrate her consistently and widely.  For instance, here are but a few examples of the unique space we confer to her.

It’s with all this in mind that I asked Benjamin Rybeck of Brazos and Sheryl Craig of The Jane Austen Society of North America what they think as to why Ms. Austen continues to be so cherished. Here’s what they said.

Benjamin Rybeck:  Simply put, I think Austen’s continued appeal comes from the relatable nature of her characters. In them, a modern audience sees the same pettiness, the same jealousy, the same love we feel today, which helps connect us to the past. Of course, Austen’s characters felt all they did while also wearing glamorous costumes, which is certainly another part of the appeal!

Sheryl Craig:  I think her novels endure because she deals with the drama of everyday life. There are no murders in Austen’s novels, or blood-thirsty monsters, but we have all cringed because of snobbery, and we have all been crossed in love, and been overlooked, and misunderstood. Her characters are heroic not because they save the planet but because they are kind, and loyal, and honest. Her villains are evil because they are selfish. Austen writes about the real world, our world, and everyone can relate to that. They could in 1817, and we can in 2017. And she makes us laugh, and smile, and snicker, and chortle with her. Her sense of humor makes her immortal.

So whether it’s her humor, relatability, pageantry, or something completely else, one thing is clear: We have an endless love for Jane.