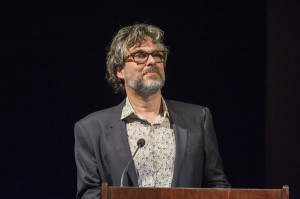 One of the reasons I wanted to go to Michael Chabon’s reading was to hear Inprint Executive Director Rich Levy pronounce the writer’s name.

More than a few times over the years I’d been — well, disabused of the pronunciation of a word I had come across reading but never heard aloud.

The first was “expletive.” I was 17, and I was in the habit of passing up chances to cuss by substituting a phrase I must have seen in Reader’s Digest, or something like that: “Expletive deleted.”

But I pronounced the word so it rhymed: “ex-PLEET-ive.”

The art teacher heard me in the hall one day and was kind enough to pull me aside and correct me.

Then it was “banal.” This was my favorite word in college: I was world-weary, you see, having grown up with Reader’s Digest on the clean streets of a small Indiana town. I’d seen it all. Top 40 music? Hollywood movies? The suburban attitudes of those philistines, my fellow Fighting Cardinals?

Except I said “BAY-null.” I sounded like a dismissive, short-tempered horse.

A few years later in grad school I heard a professor say it: “buh-NAHL.” And then more of that retroactive needling humiliation. Not only for being pretentious — but incorrectly pretentious, to boot.

With writers’ names, of course, the stakes are higher. A throwaway phrase? A French word? Probably forgivable. But mention you’ve been reading “Prowst” in the wrong circle and there goes your reputation. Even though I’d read many of Chabon’s books, I took care never to say his name aloud.

We got to the reading early. When Rich took the stage, I turned to my wife, preemptively shushing her in case she was thinking about saying something. This was my chance: Rich, I knew, would get it right.

Once he started reading from his new novel, Telegraph Avenue, the value of the right word, said the right way, became delightfully obvious. Rich said that the novel seemed to him like a “meal” — and Chabon does revel in words the way someone might with food, playing with textures and tastes. This was etymological epicureanism. It was about pleasure. It was, I now can say, not banal.

One thought on “Pronouncing your favorite writer’s name”