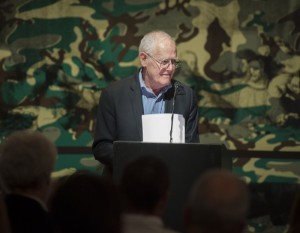 “Did you see the piece in The New Yorker?” This was the man next to me at Salter’s reading for Inprint at The Menil, also fortunate enough to get a seat. The event was sold-out. The New Yorker had just run a marvelous article about Salter. “Perfect timing, right?” He was older, in an expensive sport jacket and good cologne. I felt a little guilty sitting there among the privileged, then a little better when I noticed all the twenty-somethings (I wondered how many were lit students) there to hear this eighty-seven year-old man. My neighbor’s favorite Salter book was Burning the Days, his memoir as a fighter pilot, balanced, as ever, with scenes of love—I expect of the misguided variety.

Salter was sitting at the side of the dais waiting to start. His face seemed stamped with forgotten shock or old dismay, eyes wide, mouth hanging open like an exclamation as if it had been left like that for years. Lines jotted long ago in the front cover of my copy of a Salter novel from my days as a writing student read “Note flow in a single scene from erotic to prosaic to philosophy and back. Note harmonious intertwining of method and message.” I had come ready to hear music. But when I saw Salter’s face, I sat up and prepared for him to splice open his character. I sat up prepared for blood.

Instead, he made us laugh. He read from All That Is, his recent novel. As he did, my overly-trained awareness of artifice melted away. In Salter’s voice—the origin, after all—lines clicked into place and transformed into easy wry vernacular so that it seemed Salter wasn’t reading but talking, his manner so spontaneous and intimate I began to believe the story was true. Bowman, a young man home from the war and eager to break into journalism, visits a successful public relations specialist one morning hoping to land a job. He is ushered in by a butler, given coffee, and left in a room off the garden. The man, Kindrigen, comes in but ignores him. “Kindregin stirred the coffee, opened the newspaper, and started reading it, sitting sideways to the table. Bowman had seen villains in Westerns sit this way.” Hah! When Kindregin finally pays attention to him, droll attention as we understand from Salter’s voice, Bowman gives an eager, “I’d like to work for the New York Times.” Kindregin glanced at him for a brief moment.“Go home,” he said.”

The teacher in the graduate writing seminar in which I first read Salter’s work venerated him. Add to that long ago classroom a wannabe writer drinking in the teacher’s every word, not a thought bubble of my own, and you will understand that humor wasn’t on the horizon when I first read Salter’s work. The character, Bowman, goes on to meet a rather shallow woman who exudes sexuality and he almost instantly mistakes lust for love. He is a virgin. After their first sex, in which he comes too quickly, he feels “intoxicated by a world that had suddenly opened wide to the greatest pleasure, pleasure beyond knowing.” Nestled together afterward, he says, by way of a tender compliment, “You make me think of a pony.” In Salter’s voice, we heard Bowman’s awkward innocence, but we also saw the beautiful petite animal in his mind in full gallop against a setting sun. The girlfriend, Vivian, was not impressed.

Audience laughter—that wonderful collective spontaneous response, no time for academic analysis, or fervor—was missing in our classroom. Salter’s voice was also missing, putting the right frame around the words, pointing the way to humor, letting us hear the soft laugh of an old man enjoying his character’s sweet temporary innocence. I left that night with the new novel, vowing to also reread the older ones while holding onto these two sounds in my mind, audience laughter and Salter’s voice, so that I won’t misinterpret his deft strokes or miss a chance to laugh.

Inprint volunteers with flashlights defined a path for the crowd that night after the reading and we streamed between two gunmetal-colored Menil properties to the Inprint House for champagne and cupcakes. The line of people for Salter’s signature snaked outdoors. I joined, but thought Salter was going to be exhausted. When I got to the table, I burbled too fast about being an eager wannabe student once with a starstruck teacher and missing the humor, about how he had reframed his work for me. With a two-signature limit, I presented four of his books and asked him to choose, said I couldn’t possibly. He chortled, a real belly laugh, and signed them all.

Since then, in spite of my revelation that night, I’ve started rereading but haven’t found the same humor in Salter’s earlier books. Instead, I’ve concocted a new vision, one of an old artist writing All That Is at the top of his game and lacing his characters with his own remembered emotions—awkwardness, wrongheaded love, eager ambition, real passion. The Master chuckles as he writes, thoroughly enjoying the ride one last time.

Leah Lax has an MFA in Creative Writing from the University of Houston, and has taught memoir and fiction workshops for many years for Inprint. Her lead essay in the anthology Keep Your Wives Away From Them was a recent recipient of a Golden Crown Literary Award.