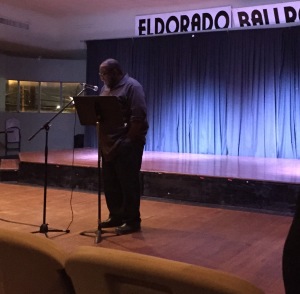 Earlier in the day, Moten delivered a talk on “Hesistant Sociology: Blackness and Poetry” at the University of Houston. There too, he employed musical epigraphs. One was a recording from a section from Zong!, the innovative masterwork by M. NourbeSe Philip, which linguistically and phonetically deconstructs the legal ruling of slave ship sailors who threw 150 humans overboard in the middle of the Atlantic Ocean in order to cash in on lucrative insurance. The other was a solo Thelonius Monk practicing his tune “I’m Getting Sentimental Over You.” END_OF_DOCUMENT_TOKEN_TO_BE_REPLACED