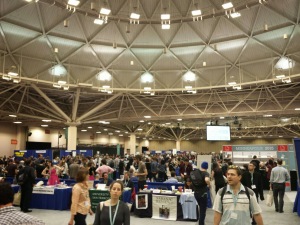 Sam: It’s pretty true to its title–Association of Writers and Writing Programs–so this year Minneapolis was crawling with thousands of people who were either writers or parading as writers, publishers, teachers, agents. Ask any Uber driver. And some of them even liked us. A kind fella who picked me up after I had spent a couple loud hours at the Hilton bar (where everyone seemed to end up) didn’t miss a beat before telling me that he loved giving rides to writers. He said he liked it when there were two of them. That way he could listen to them talk. As I type it, this sounds a little like observing an animal in its natural habitat. And I guess it is. At once, AWP seems to fulfill and complicate all stereotypes of writers. But it’s funniest when it confirms them. I was staying with my aunt and uncle in Minneapolis. And when he picked me up from the airport, my uncle asked, “Did you bring a beret?” When I made it to the convention center the next morning, there were about fifteen people outside for a smoke break, and several wore berets. END_OF_DOCUMENT_TOKEN_TO_BE_REPLACED 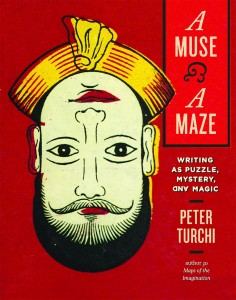 The lawbreakers are your typical seaside layabouts; nothing to see here. Encyclopedia’s primary nemesis is a fledgling sociopath named Bugs Meany, instigator of a gang of would-be toughs called the Tigers who try to scam the other townies. Each chapter begins with an aggrieved victim seeking out Encyclopedia and his sidekick, Sally Kimbell. They ride their bikes to the scene of the crime; the story of the accuser and the story of the accused are told, and Encyclopedia pauses dramatically while Sobol interrupts to direct you to page 64 for “the solution.” In the end, some detail that violates the rate at which water evaporates, or the conventions of elevator repair, or the date when the Liberty Bell was cracked, is the lie that tells the truth. The antique lamp or the champion yodeling toad is returned to the rightful owner, and order is restored.  END_OF_DOCUMENT_TOKEN_TO_BE_REPLACED

Houston’s literary community is brimming with activity. One of the key players making Houston such a vibrant literary city is the UH Creative Writing Program, nationally ranked as one of the best creative writing programs in the nation. Inprint is proud to continue providing fellowship, prizes, and other support for emerging writers in the Program, surpassing a total of $2.8 million to date. Giuseppe Taurino, Assistant Director of the Program, will now blog on An Open Book to share exciting news from UH. His inaugural post  extols the virtues of 15 notable books written by faculty, alums, and students from the Program, many of whom have received Inprint fellowships and prizes.

I grew up in a working class immigrant family. My parents, along with most of my mother’s family, came to New York City from Italy in the early 1970s. None of them finished grade school. The moment I made it to October of my first semester at NYU, I’d gone further in school than anyone on either side of my family had ever gone. And when I actually earned my bachelor’s degree, I became proof that everything my parents endured over the course of their journey had been worth it. Even my father’s father, who was rarely impressed by anything, believed I’d taken the family to new heights. He was convinced my BA in Psychology made me a doctor—the first in the family—and went so far as to ask me to review and assess the medical reports detailing his heart and blood pressure conditions.

Rightfully or not, I’d earned a reputation for being an academic within my family, and book-smart amongst my friends. My being nervous about the ability to perform in a school setting was probably the last thing any of them would ever expect, but that’s precisely how I felt when I decided to leave Queens to pursue an MFA degree at UH. Coming from a background that didn’t value literature, having only taken a handful of lit courses as an undergrad and continuing ed student, and having exactly one completed short story to my name, I was convinced I’d be exposed at UH. From the day I was notified of my acceptance, to the day my then-girlfriend and I packed up my crappy car and started driving west, I kept thinking whoever decided to let me in had probably made a mistake. END_OF_DOCUMENT_TOKEN_TO_BE_REPLACED