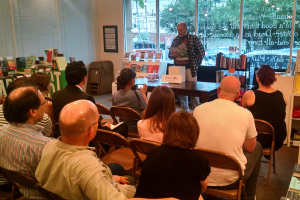 It’s a decent crowd at Brazos Bookstore, on a Thursday evening in late July. Wine, beer, and water are on offer, and cheese and crackers. It’s festive, convivial, the usual gracious Brazos atmosphere for a reading—with the exception that we aren’t gathered to listen to a single visiting writer. Instead, unusually, we’re here to listen to each other.

Brazos has graciously agreed to host a group reading by the members of Erika Jo Brown’s Inprint personal essay workshop. They’ve been meeting under Erika’s guidance for two months this summer to think about and experiment with the craft of this varied, extensive form, which (as Erika points out in her course description) can be both “intellectually rigorous and exploratory.” These folks are used to reading to each other, sharing and responding to each other’s work, and considering examples by selected essayists to help them think about such matters as “narrative arc, emotional ‘stakes,’ concretizing details, dialogue, point of view, characterization,” and  more. They’ve been working, three hours a week for eight weeks at Inprint House. Now they’re going to take a big step outside the intimate confines of the workshop and strut their stuff publicly.

You can spot the essayists—they’re the restless ones with papers in their hands. The rest of us—friends, family, and curious others who found the reading on the Brazos schedule—are here to support them and listen to a sample of their work.

You can spot the essayists—they’re the restless ones with papers in their hands. The rest of us—friends, family, and curious others who found the reading on the Brazos schedule—are here to support them and listen to a sample of their work. 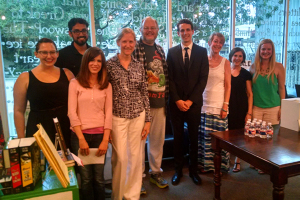 And what a rich sample it is. The range of tone and topic demonstrate beautifully and skillfully the elasticity of the form. We hear excerpts of essays that think out loud about:

It is a kind of recital of minds at work, and the humility and skill of these writers, of various ages and backgrounds, is a joy to behold. Erika closes with words of thanks and a proud smile, and one has the feeling that these people had a pretty wonderful summer, and that this is only the beginning. The personal essay is alive and well.