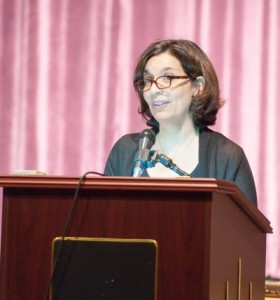 Palacio spoke in a friendly, comforting voice, the voice she might use with her two sons. She began with a slide presentation, and one of the first photos she shared showed the ice cream shop where she and her boys encountered the girl who inspired her character August Pullman, or “Auggie.” Palacio began Wonder the same day–on Post-Its. She showed us the first two, and they sounded like Wonder‘s first page. 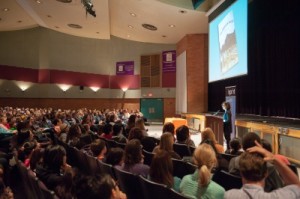 R.J. Palacio shared many intriguing facts about Wonder. For instance:

— She named Wonder after the song “Wonder” by Natalie Merchant.

— Wonder took Palacio a year-and-a-half to write. She worked between 12 and 3 a.m., because “this was the only time it was quiet.”

— The name “Jack Will” was inspired by a memory of a mother coming to pick up her sons, friends of her boys, and crying out, “Jack, Will! It’s time to go!”

— Palacio kept “precepts” as a girl and used them in the novel. She based Auggie’s English teacher on her favorite high school teacher.

— She identifies most strongly with the character Charlotte, who is always “nice,” but never truly kind, as Summer is. R.J. Palacio wants to be–and, wants us to be, like Summer and to go out of our way to be brave and kind. 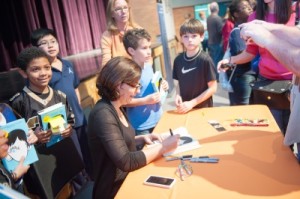 There were more kids than adults in the audience, and kids were jumping up and down during the Q&A. A young boy in a Boy Scout uniform asked the last question: “I have problems with my ears,” he said. “Have you ever known anyone who has problems with his ears?”

“Great question,” Palacio said–and, indeed, the boy had asked everyone’s question: “How did you know what it’s like to be us?” For there is an Auggie Pullman, a good person who’s unappreciated and even ridiculed for his uniqueness, in all of us.

Palacio has never known anyone with ear problems, but, she explained, “writing is more about extrapolation than it is about direct experience.” For example, she often has parents of special-needs children assume she has a special-needs child, even though she doesn’t. “I don’t know what it’s like to have a child who’s had twenty-seven surgeries,” she said, “but I do know what it’s like to be the mom of a child who’s sick with the flu, when you stay up all night keeping vigil by the bed.”

So, how did R.J. Palacio write this novel that makes us feel understood–and, helps us better understand others?

So, how did R.J. Palacio write this novel that makes us feel understood–and, helps us better understand others?

With every breath, she described how she accomplished this, but she never answered the question, because there is no answer, just as there are no answers to the questions of how Auggie stays good despite what he suffers and how his bullying classmates finally arrive at kindness. There are no answers for wonders like these, there is just wonder.