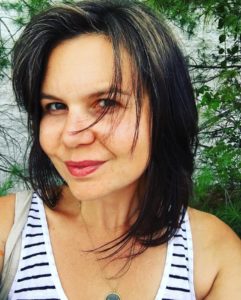 What’s wonderful is you can find ways to financially support yourself. But the trick is to remember I moved here for UH’s program. I didn’t move here for any of this other stuff. The PhD isn’t my side job.

MB: Totally, that’s relatable. What are you taking this semester?

MB: Oh nice! So you started with an advanced workshop?

CW: So I wasn’t really sure what the difference was…and I don’t like anything that makes me feel like a sissy. So when I heard there was advanced, I was like I wanna be in all those. So I took Kevin’s advanced workshop last semester and it’s the best class I’ve ever been in, in terms of workshop. It was a small group of women and Kevin and every week we brought in a different piece of poetics, and it led to great discussions on the current political climate and what’s going on in the contemporary poetic landscape.

The thing I was really struck by is how consistently I was offered a peer group of really brilliant people who would speak up without any personal undercutting or ego. Also the willingness to be corrected or wrong was so strong in that group, and I think Kevin really helps bring that to the table. He didn’t assert his opinion; he just let us talk and would weigh in when he thought something interesting was going on.

MB: Did you always know you wanted to get your PhD?

CW: I knew in my MFA that I wanted to do the PhD. I took eight years between undergrad and getting my MFA. During that time I lived in New York City and did publicity. I actually wrote for about my life for Candace Bushnell of Sex and the City. She was best friends with my boss. It was a wild job because not only were we around Candace and Jay McInerney all the time but also a lot of my job was helping to open a hotel club in Atlantic City…just wild. I had the best time. And then I got into more corporate PR but I hated that so I started my own company doing social media and brand management. And I realized I had like the best possible situation. I was working maybe 20 hours a week, was able to save up some money, had a cute Brooklyn apartment and a little pug, and I still wasn’t happy. That’s when I knew I really wanted to write. I had been writing on my own but then I found out about fully funded programs. So I decided if I got into one I would go. So that’s how I ended up moving to Ohio. Since then my trajectory has made sense, but that was like a whole side life that I had.

I admire people who get on this path early and know what they want to do and have beautiful things to write about. But for me, a lot of things in my own life got stirred up by being in the wild.

MB: What are some of the things that stand out in Houston or this program that you’re enjoying here?

One of the things I really love about here is it reminds me of Los Angeles where I grew up. It’s such a big city with so many offerings. I don’t know how I would feel about coming to Houston straight from New York. I like to think I’d recognize some of my favorite about parts of Queens, like getting to hear different languages on the radio stations. That also really reminds me of how it was growing up in LA. But especially coming here from Columbus, I’ve just been completely delighted. Like I don’t even mind the weather. And I like Columbus a lot. Columbus was a great small place to focus on my studies. This is a place I could live in though. That’s part of why it’s been so easy to overcommit myself outside the program. I keep seeing how livable this city is.

Houston has that cowboy edge that I love and on top of it so much diversity, which really complicates things in the best way. I think it’s one of the most interesting cities in America to be living right now.

But I have to do program first! Not just thinking about supporting myself afterward. It’s incredible to be a writer in a city and know you will find ways to support yourself. Like, I’m not dead weight in my relationship. That’s an incredible thing to feel as an artist.

Houston has that cowboy edge that I love and on top of it so much diversity, which really complicates things in the best way. I think it’s one of the most interesting cities in America to be living right now. I absolutely love being here. You don’t have the density you might get in other cities, but at the same time in those places you don’t have the relaxed pace of life that you get here.

Part of why I chose the program here is the degree of autonomy I knew I wanted seemed really possible here and that really impressed me. The professors really go out of their way to establish relationships with you as a junior peer instead of just a child or something. It’s so nice.

MB: Can you tell us about your book that will be coming out next spring? Did you have a project you were working around?

Yes. I love projects, and mine came out of a class at OSU on gender and poetry which was based heavily on Gurlesque. sometimes its really experimental and insane. very guttural very bodily. it works in audacious realms. but at the same time I’ve always loved reading novels. that’s my favorite form of writing to interact with, more so than books of poetry because I’m really drawn to stories. So I keep going back and forth between wanting to cause the calamity of an experimental lyric poem, but then I want to tell a story. It basically evolved into a retelling of my childhood, growing up in Los Angeles in the 90’s in a majority white Jewish community during the race riots and all that, but through the lens of film noir. Another thing about where I grew up is it’s the center of the American sex industry. So theres a lot of stuff happening.

MB: Did the film noir influence also come from just being around Hollywood and all of that?

Absolutely, yeah. And that central idea of you’re in a situation where you have to work with these authorities, but those authorities are all too human, and how that is a metaphor for childhood.

So for anyone working on his or her thesis, it can easily become a book. Mine looks more or less the same. But now knowing that it’s going to get published I am becoming aware of little areas I want to change knowing my family will read it. I don’t want to change it much, but maybe take it back one step here or there. Even if we have poetic license, when someone writes about you in any way you go spelunking and get to see everything they think.

I wouldn’t say I wrote this book to get things off my chest, that’s not true. I wrote it to create that world of confidance, even if it’s fictional, between a writer and a reader, where you start to believe that the voice is telling you something that matters to it and that you may be one of the only people it tells.

MB: Where did the title inspiration come from?

So it’s called Valleyspeak, which came from the San Fernando Valley. You know, those girls who say, “Like totally, for sure!”

MB: Do you have persona poems in that voice?

Not so much. And I also avoided that sort of hard-boiled detective voice that comes from noir. The voice is relatively modulated throughout. There are four poems or so that are told from a third person perspective, and those were my favorite to write, these odes. One is “Ode to the One Glove,” which is about OJ Simpson, and one is “Ode to the Glitz” which is about Jean Benet Ramsey. So these little side pieces about what’s going on in this world, from a larger perspective, and how do you see the family function through it. Those were a lot of fun. And “Ode to the One Glove” got nominated for a Pushcart, so that was amazing.

MB: Who are some of your influences or favorite people to read?

Dream songs. Part of what I love about Berryman is how wild he is. The link between his wildness and his poles of painful, hung over self-hatred and alcoholism. Because addiction and alcoholism is also part of the story. Two of the poems in this book come from me lifting out the words of those poems and just looking at the grammatical structures. He’s so problematic to read, but he’s also so interesting to read, as a writer.

Growing up I was obsessed with Anne Sexton, a little bit of Sylvia Plath. I think I’m moving away from this–I don’t like the word confessional because I feel like it has a negative connotation, especially when women do it, and because it implies that what I’m confessing is true and that I feel bad about it. And neither of those things are the case. But that direct appeal of language, I’m very drawn to that. And as a reader too. I love when someone is trusting me enough to tell me something.

I wouldn’t say I wrote this book to get things off my chest, that’s not true. I wrote it to create that world of confidance, even if it’s fictional, between a writer and a reader, where you start to believe that the voice is telling you something that matters to it and that you may be one of the only people it tells.