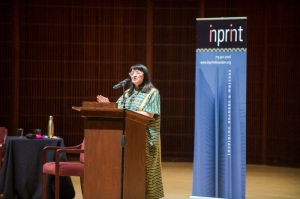 This reading is sold out.  I told my students: “Hey, I think this is going to sell out.”  They look at me like maybe I want them to do something.  I do.  Or I did.  Those tickets are gone. END_OF_DOCUMENT_TOKEN_TO_BE_REPLACED

This is the second of a two-part review of special events at Christ Church Cathedral, in partnership with Brazos Bookstore. 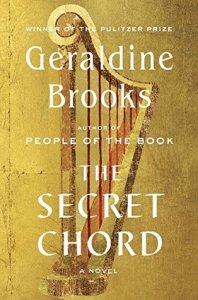 In his witty introduction to Geraldine Brooks’s reading, Benjamin Rybeck jokingly accused her of not actually writing her own books. More likely, she traveled back in time to chronicle the rich historical backdrops and singular adventures of her characters.

When she approached the stage, Brooks gamely replied: “I wish I were a time traveler then I could go to Scotland and meet a hunky guy in a kilt.” It was just the sort of improvisation that you attend readings for—to witness the spirited mind of your favorite author (and to hear it in her slight Australian accent).

Brooks started with a few words about reading at a church, mentioning that she was rereading Marilynne Robinson’s Gilead, one of her favorite books, which centers on the minister John Ames. She also noted that temple is the place where King David, the main character of her new book The Secret Chord finds “solace and peace.”

In researching the second Iron Age in Israel, Brooks endeavored to replicate aspects of life as it would have been lived—and experienced the origins of several Biblical idioms. She literally “separated the sheep from the goats” and learned how to “be a good shepherd.” END_OF_DOCUMENT_TOKEN_TO_BE_REPLACED 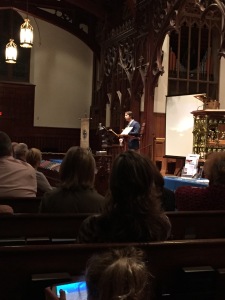 From one perspective, the writers could not be more different. Eagleman is a neuroscientist who directs a research laboratory at Baylor College of Medicine. Brooks is a Pulitzer Prize-winning writer of historical fiction. Yet both explore notions of society, time, vision, and humanism in their writing. And their books have been translated into dozens of languages.

This is the first of a two-part review of the special events.

In Reverend Art Callahan’s welcome to David Eagleman’s reading, he quipped that “at church, we do not leave our brains at the door.” This was a perfect prologue to a fast-paced, multimedia event that held the audience (and their brains) rapt.

Eagleman is clearly passionate about the public understanding of science. He’s written for The New York Times, Discover Magazine, Atlantic, Slate, Wired, discussed new trends on NPR and BBC, and serves as an editor for several scholarly journals. END_OF_DOCUMENT_TOKEN_TO_BE_REPLACED

One of the hot spots of Houston’s literary life is Brazos Bookstore. We are thrilled to have Ben Rybeck join An Open Book as a regular contributor to give us an update on all the exciting happenings with the store.

Using the time-honored tradition of exaggeration to combat the notion that only quiet, studious things happen at bookstores

Here at Brazos, we do many quiet things. We take books off shelves, we put books on shelves, we carry books in our arms, we sit and read books old and new, we take out the trash (usually not full of books), we drink water, we whisper to well-mannered customers about Jonathan Franzen and Alice Munro…

But then, sometimes, the store literally explodes (clarification: not literally) with excitement—and by sometimes, I mean this happens always, all the damn time. Consider October, for example, when we’ll host Houston’s own neuroscience rock star David Eagleman (10/8); a poetry night with Nick Flynn, Rachel Eliza Griffiths, and Gregory Pardlo (10/19); and other mind-altering literary luminaries like Sloane Crosley (10/16), Eileen Myles (10/24), and Richard Ford (10/26). Plus, we’ll have works of literary horror on display leading up to Halloween. (If you stare at the display for long enough and say “Brazos Bookstore” three times…well…look out behind you.)

But, as they say on infomercials, wait—there’s more! Here are three highlights of our October programming sure to literally blow your mind, literally (see earlier clarification re: use of the word “literally”). END_OF_DOCUMENT_TOKEN_TO_BE_REPLACED 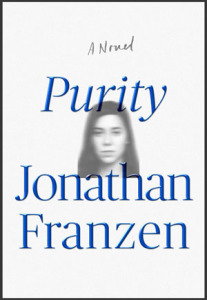 Franzen is funny right off the bat.  I already like him since one of his favorite things is Kafka’s Metamorphosis, Gregor’s struggles being grotesque yet hilarious.  Franzen has learned much from him.  Franzen looks at the audience and confesses: “It is always weird reading from one side of the stage.  I feel like I should be showing you slides.”  In a way, he sort of does, showing us glimpses of the main characters through a series of short readings on (or from) each.  END_OF_DOCUMENT_TOKEN_TO_BE_REPLACED