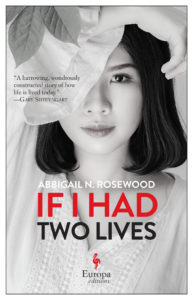 Time flies when you’re having fun, and in the blink of an eye, it has been a month and a half since I started my role as Marketing Associate at Inprint. For about two years prior, I was the Events Manager at Brazos Bookstore. Sadly, I’m around fewer physical books, but luckily, I’ve found this amazing job where I can use reading and writing as vehicles for supporting the literary arts in Houston. Also, I can finally also go to events and enjoy them!

Abbigail N. Rosewood was born in Vietnam, where she lived until the age of twelve. She holds an MFA in creative writing from Columbia University. An excerpt from If I Had Two Lives won first place in the Writers Workshop of Asheville Literary Fiction Contest. The novel follows a young woman from her childhood in Vietnam to her life as an immigrant in the United States and her return to her homeland. I loved the book so I’m ecstatic that she will be in Houston presenting If I Had Two Lives on Thursday, May 30 from 7 – 8 pm at Blue Willow Bookshop.

If I Had Two Lives is a luminous debut novel which follows a young woman from her childhood in Vietnam to her life as an immigrant in the United States and her return to her homeland. Part historical fiction and ghost story, where the ghosts take on several forms such as history, memory, and trauma. She will be presenting the book on Thursday, May 30 from 7 – 8 pm at Blue Willow Bookshop.

In this interview, I asked Abbigail about her book, her craft, and how the process of completing and publishing it changed her.

THU: What kind of books do you like to read? What are you reading now?

ABBIGAIL: I embrace all genres: fiction, poetry, and non-fiction. When explored in-depth all genres begin to intersect, to weave together a vision that is beyond itself. This isn’t limited to writing, but also visual arts and music. Categorizing art may be useful to distributors and consumers, but I don’t think artists function this way. Fiction can wrestle with philosophical quandary, essays can have narrative arcs, poetry saturates the mind with music without playing a single note. I appreciate all artistic expressions whether or not I agree with them. Right now, I’m reading The War of Art by Steven Pressfield, The Hero’s Journey by Joseph Campbell, a friend’s manuscript, Invisible Cities by Italo Calvino, and the magnum opus graphic novel Kabuki by David Mack.

THU: Does your reading influence or inform your writing?

ABBIGAIL: My writing is a combination of intuition and distillation of everything I’ve ever read. My first piece of writing in high school sounded like a bad Victorian, gothic knockoff. I emulated for years until I found my creative voice, or rather it found me.

THU: The novel reads like a ghost story. The ‘ghosts’ take the form of history, memory, and trauma, and they haunt the main character. Tell me how you gave life to these themes.

ABBIGAIL: I love that observation. I’m interested in all manners of haunting, literal ghosts or as you say, memories and trauma. For the child narrator, haunting tends to be more literal, like pretending to be her father’s ghost. All her actions reflect her knowledge of death at a young age. For the adult narrator, her memories of her before-life are so vivid that they are constantly present–they haven’t been digested by her subconscious and are always within reach. It doesn’t take much for her memories to resurface. In a way, they are much more real to her than her immediate surrounding. Her reconstruction and reenactment of memories is part of the effort to comprehend her past and how she has become who she is. As I wrote, I was always asking myself questions: How does trauma secrete into ordinary moments like washing the dishes? Can you abandon someone you really love? Is love possible for a character who has known only loneliness?

THU: The novel focuses on the narrator’s relationships to her mother, a little girl, and a soldier. I love how you’ve written it to where the reader focuses on her relationships yet an entire world coexists linearly. You have to imagine yourself from their perspectives to capture the full scope. What can you say to that?

ABBIGAIL: Thank you so much! Bits of me are in all of my characters, including the mother, the soldier, the little girl, and even the little girl’s father. I believe that compassion is the only key that fits everyone–I try to afford every character a kind of god-like compassion so that they are free to live out their life on the page, to make decisions that seem ugly, but all the more human because of it, and therefore beautiful too. There’s always a risk in holding back judgment completely, for example, to imagine violence–its perpetrator and victim–this is also the privilege of art. Many things in life, such as politics or love, fail due to a lack of imagination.

THU: Can you describe your journey into writing?

ABBIGAIL: I’ve loved to write since elementary school, but I didn’t see it as a career option until my second year in undergraduate. I still remember the first flash fiction piece I wrote using something resembling my own voice. The Humanity of Sunflowers was about a widow receiving the news of her husband passing in combat. I didn’t write it for class or for anything other than the drive to create. In the beginning, all my characters were automatically white. I was looking outside of myself for material. For my first creative writing class, I submitted The Foreign Dream, a story about a woman who sold helmets on the sidewalk of Vietnam, had a one-night stand with a white man, and gave birth to a half baby. It was my first attempt to depict Vietnamese lives. The short story was published in a literary magazine. I think that was the point when I began to search inward for material and when I realized that my characters didn’t have to be white, they could be like me.

THU: An excerpt from the book won first place in the Writers Workshop of Asheville Literary Fiction Contest and it’s your debut novel, could you describe the process of writing this novel?

ABBIGAIL: The way a novel comes to fruition is similar to the birth of a baby–the idea was planted, germinated, and grew until it must be born. Once I found the voice, I sat down and wrote over thirty pages in one sitting. I submitted these pages to my workshop at Columbia. This was a mistake because receiving criticism this early on completely stalled my process. Once classes ended, I continued on my own until I have eighty pages. By then I knew I had a novel. I was lucky to have a supportive thesis advisor who pushed me relentlessly. At the time I was working at an insurance company, I wanted to go into zombie mode at the end of the day, but my advisor demanded that I turned in twenty pages every four weeks. I wrote after work and I wrote every Saturday and Sunday. I did nothing for many weekends except writing. I hated my job¾it was the most corporate of all corporate jobs, situated on Wall Street of all places, but it gave me the drive to finish my book. Looking back, it was one of the most beautiful time of my life and I didn’t even know it.

THU: Now that the novel has made its way into the world, do you have a sense of where your writing will grow?

ABBIGAIL: My second novel is finished and still looking for a home. Stylistically it is very different than my first. I wrote it quickly in a state of despair so it doesn’t have the compassion of If I Had Two Lives. It is a voice full of envy, desperation, and grief. Perhaps it is more brutal and so all the more selective of its readers. In many ways, I feel doomed that my pool of readers will inevitably narrow down with every work I put out. I give out slices of nightmares, which I consider gifts, but not everyone wants to confront such darkness. It is enough to reach a few readers. How can anyone expect more than that? I feel incredibly lucky. From here I hope to write more daringly, to delight, to make more unexpected connections between things.

THU: In your acknowledgements, you wrote: “This novel was born out of the aching pleasure of rearranging memories, reinventing the past–a personal need to solve my childhood mysteries, figure out how I’ve arrived here, and give myself emotional conclusions that real life doesn’t afford.”

This novel was born out of the aching pleasure of rearranging memories, reinventing the past–a personal need to solve my childhood mysteries, figure out how I’ve arrived here, and give myself emotional conclusions that real life doesn’t afford.

ABBIGAIL: Absolutely, I have only ever written for myself. This sounds self-centered, but art has to be if it were to have any chance at truth. Publishing is necessary for a writer, but secondary to the process. My personal artistic measurements ask many questions including, Is the work original in some way? Does the artist risk something to accomplish her vision? Can the work be done by her and her alone? I will always write what only I can write.

THU: Do you think it’s possible to re-write this story?

ABBIGAIL: No, I don’t think so. I have recurring obsessions that will emerge in all of my writing, but this particular story could only be done once.