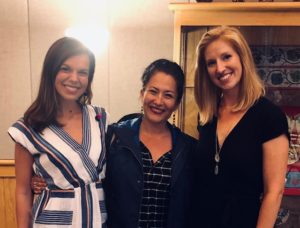 I love to write at my desk and to write in my bed, my couch. It’s true that when it comes to writing, I prefer the privacy of being home. Here, I can walk freely in circles, talking to myself about the particular conflicts I’m working through in a novel. I know how to circumvent the coffee table and couch, the rug where my cat tends to stretch in the sun.

Don’t get me wrong: I certainly like to write in cafés and libraries, on the Metro—anywhere, really. I’ll take whatever time I can get! But there is something to be said about being able to recite aloud a draft without being concerned that someone beside me is trying to enjoy her newspaper or blueberry bagel, unruffled by my performance.

Writing at home is a luxury I don’t take lightly. Writing among a community of writers who also share a passion for your craft is yet another. This summer I was reminded of the privilege of not only being a writer, but of living in a community that values writing.

In June, I left Houston to attend a writing conference in Minnesota and returned with a renewed appreciation for the city whose support of the arts is something that nurtures me as a person and helps foster the work I make.

Writing with Others: A Houstonian Reunion

I attended the Minnesota Northwoods Writers Conference in Bemidji, Minnesota, with my dear friend, the poet Chelsea B. DesAutels. Chelsea earned her MFA at the University of Houston Creative Writing Program (UH CWP) and is a recipient of the Inprint Verlaine Prize in Poetry. We became friends shortly after I moved to Houston to begin my PhD in Literature and Creative Literature in 2017.

From the first workshop I took at UH, I was not only drawn to Chelsea’s poetry but stunned by how well she read what I was doing—or trying to do—in my own work. As a student enrolled in a writing program, I am grateful for the community I have at UH; as a resident of Houston, I am likewise grateful for the literary community the city affords. I don’t take for granted the relationships I have with writers with whom I can consult closely about my work and whose work I feel as though I am also able to offer constructive feedback about. From my first semester at UH, Chelsea quickly became one of those writing friends for me.

While we were used to exchanging work over email, we weren’t accustomed to the prospect of not being geographically close enough to meet to discuss the poems we shared in person. Because Chelsea relocated back to Minneapolis with her family after she finished her degree, our plans to attend the Minnesota Northwoods Writers conference not only allowed us an opportunity to spend time writing together, but to participate in the workshop of a poet whose work we first bonded over.

Before I even arrived at UH, I had read Ada Limón’s fourth book, Bright Dead Things, numerous times, and considered her an enormous influence on my work. Given how Chelsea and I connected over our mutual admiration for Ada Limón’s work, it seemed only natural that she and I apply to this specific conference in the hopes of studying with her. That Ada Limón herself had read at Houston’s own Alley Theatre alongside Gregory Pardlo as part of the 2016/2017 Inprint Margarett Root Brown Reading Series made our participation in her workshop come full circle. Yet one more Houston connection? Poet Sean Hill, a UH Creative Writing Program alum, also an Inprint fellowship recipient, serves as the Minnesota Northwoods Conference Director.

The Minnesota Writers Conference hosts an astonishing array of faculty and participants from Minnesota and beyond on Bemidji State University’s (BSU) campus for a week of workshops, readings, and craft talks. The week was comprised of our participating in a twelve-person workshop with Ada Limón and attending craft talks and readings by such luminaries as Terrance Hayes, Camille Dungy, Peter Orner, Dustin Parsons, and Aimee Nezhukumatathil. BSU is located on the shore of Lake Bemidji; a single street separates the dormitory where we stayed from the lake. To write and study writing in such a beautiful place has influenced the work I began at the conference and continue back in Houston.

Spending time elsewhere and returning to where you come from can really land things in the creative process. Fostering relationships with a different community of writers for seven days of writing-focused opportunities allowed me to see my work and my role as a writer in the world differently. Writing is not only what fuels me as a person, but it is also what brought me to Houston. How lucky are we that we get to live in a city in which the arts are so embraced? More than ever, I have a deeper appreciation for Houston and the relationships we make. One of the themes I noticed coursing through the craft talks and readings, as well as Chelsea’s and my own conversations—and, by extension, this blog post—is gratitude. This balmy summer in Houston, I am brimming with gratitude for living in a community rich with readers and writers.

Theodora Bishop—recipient of an Inprint C. Glenn Cambor Fellowship, a four-time Pushcart Prize nominee, and a PhD candidate at the UH Creative Writing Program—is the author of the novella On the Rocks (Texas Review Press), winner of a 2018 Next Generation Indie Book Award, and the short story chapbook Mother Tongues, winner of The Cupboard’s 2015 contest. To learn more about Theodora, visit her website at theodorabishop.com.