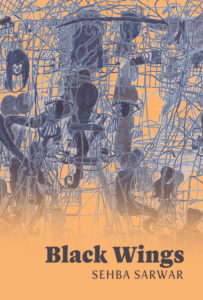 When you work at a place like Inprint and are surrounded by talented writers, you are lucky to have many friends that have their books published. There is something extra special to me about reading a book written by a friend. Not only are you proud of her or his accomplishment, but you can’t wait to dig in and read the story they have created. For me, reading Sehba Sarwar’s novel Black Wings, on the one hand, felt like spending the evenings with an old friend, a friend I miss dearly who use to live in Houston, a friend I have laughed with, partied with, and shared many important life conversations with. The beauty of a good writer however, is their ability to take you into another world, a world you absorb yourself into, a world that stands on its own, whether or not you know the writer. Black Wings excels at this and so much more.

Many Houstonians know Sehba Sarwar as the founding director of Voices Breaking Boundaries. As a writer and artist, she creates essays, stories, poems, and art that tackle displacement, migration, and women’s issues. Her writings have appeared in publications including New York Times Sunday Magazine, Asia: Magazine of Asian Literature, Callaloo and elsewhere while her short stories have appeared in or are forthcoming in anthologies with Feminist Press, Akashic Books, and Harper Collins India. Born and raised in Karachi, Pakistan, Sarwar is currently based in Southern California. Her novel Black Wings was originally published in Pakistan. She will be reading from a second edition of the novel, published in the United States for the first time by Veliz Books this Monday, May 6, 7 pm at Brazos Bookstore, 2421 Bissonnet. Free and open to the public, click here for more information about the reading to order a copy of Black Wings.

She will be reading from a second edition of the novel, published in the United States for the first time by Veliz Books this Monday, May 6, 7 pm at Brazos Bookstore, 2421 Bissonnet.

The novel is set during post-9/11 times in Houston, Texas and Karachi, Pakistan. The story is revealed through the voices of mother and daughter Yasmeen and Laila. After a family tragedy, followed by many years of separation, Yasmeen and Laila confront family secrets, broken relationships, and a sense of alienation from their immediate and global environments. I caught up with Sehba before her Brazos Bookstore reading to ask her a few questions about the novel, how it has been changed in this latest edition, and about coming back to Houston. 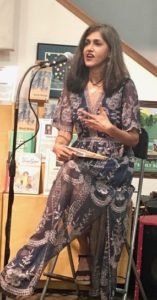 KRUPA: Black Wings was originally published in Pakistan in 2004 and this is the first U.S. publication of the novel. Did you make extensive changes to the novel, and if so, what led you to make the particular changes you selected to make?

SEHBA: When I signed the contract with Veliz Books, I thought I’d tinker with the text a little bit, but once I opened the document, I began to scrub the text. The process took me six months—much longer than I had anticipated. This is because the book was published almost 15 years ago, and my writing style has become much leaner since then. I also am a mother (my daughter was born a few months after the first edition came out), so I have grown emotionally. And finally, my editor Minerva Laveaga is excellent. She gave good feedback, and we went back-forth quite a few times. That was different from working with Alhamra Books in Pakistan for the first edition. Back then, my agent Gail Hochman helped with edits.

KRUPA: Black Wings deals with so many complex issues. One of the main focuses of the novel is loss and the way different characters navigate loss – loss of a sibling, loss of a child, loss of a marriage, loss of a sense of home, loss of connection, loss of country, etc. Do you have a sense of what led you to make this a central focus of the novel? Personal experiences, observations, incidents?

SEHBA: Yes, loss is a huge part of the novel. Years ago, when I finished the book, I realized that I was writing about the death of my uncle, who passed away before I was even born. He was barely 30 years old when he died, and his death devastated my father’s family. His photograph—much like Yasir’s in Black Wings—was in every family home in Karachi. When writing the novel, I didn’t know how much my uncle’s death had impacted me and my family. And then of course, because I live away from my “home,” Pakistan, I am aware of the loss that I experience. And my family has also experienced that loss because both my mother’s family and my father’s family had left the cities of their birth in India after the 1947 Partition and had migrated to Pakistan. I’m still processing that loss – now through my memoir-in-progress, On Belonging.

Years ago, when I finished the book, I realized that I was writing about the death of my uncle, who passed away before I was even born. He was barely 30 years old when he died, and his death devastated my father’s family…. When writing the novel, I didn’t know how much my uncle’s death had impacted me and my family.

SEHBA: I think that the text is much tighter, but the content is the same. The book came out post-9/11, so the world had changed between the time that I started Black Wings, and by the time it was published. The first chapters in both Book One and Book Two open in airports and airplanes, and the narrative reflects the challenge of movement across continents, which has changed as has our relationship to flying. I don’t write thinking of a message or a story – I let the story unfurl, so in that sense, the second edition is the same as the first.

SEHBA: The first edition of the novel was published in Pakistan, and I gave readings in Karachi, Lahore, and Islamabad, and the book was available in bookstores all around Pakistan. Reviews also appeared in Pakistani newspapers and magazines. At the same time, because I was based in Houston, I did bring copies to Houston, and Brazos Bookstore carried some. I also read for my organization, Voices Breaking Boundaries, and at random spaces mostly around Houston, but I never toured the novel in the US. My daughter was born a few months after Black Wings was released in 2004, and her birth has been the most life-changing event I have experienced. So the book was superseded by Minal. With this new edition, I’m actually doing a U.S. tour, and the book is now available all around the country. Universities and colleges are interested in the novel and faculty are reviewing the work as a possible textbook – so because of the availability of the second edition and the fact that I’m able to market the novel, Black Wings is getting a wider readership already.

With this new edition, I’m actually doing a U.S. tour, and the book is now available all around the country. Universities and colleges are interested in the novel and faculty are reviewing the work as a possible textbook – so because of the availability of the second edition and the fact that I’m able to market the novel, Black Wings is getting a wider readership already.

KRUPA: The novel has two main first person narrators, mother and daughter, Laila and Yasmeen. The story and the way it is revealed demonstrates how much empathy you as a writer have for each’s life situation. You are both a mother and a daughter. Which character was more challenging for you to write?

SEHBA: The mother—definitely. As I said earlier, when I began writing Black Wings, I had yet to experience motherhood, so I remember asking my mother a lot of questions as I wrote. Switching voices between the mother and daughter made it easier for me to stretch and understand where each character was coming from. In the second edition, Yasmeen, the daughter, becomes softer. I think this is because I have grown and changed.

KRUPA: The idea of home and what it means is something this novel and a lot of your work tackles. For many years, Houston is where you and your family resided, a place you owned a house, a place that in many ways served as your home. How does it feel to be coming back to share your stories and this novel with Houston where it is set?

SEHBA: I had never planned to stay in Houston as long as I did—more than two decades—but Houston became a home for me, and I’m so thrilled to be back and share my work with my Houston friends, many of whom never read Black Wings since the book wasn’t easily available in the US. And I’m happy that I’ll be reading at Brazos Bookstore. That’s the only bookstore in the city that carried Black Wings, and it’s a bookstore where I’ve seen so many writers I love and respect. As always, there won’t be enough time for me to see everyone and do everything because I’ll be swinging between Austin and San Antonio. But I’ve spent enough time in Houston to know that I’ll return soon enough. In the summer, I’ll be doing a Macondo Writers Workshop in San Antonio, and in the fall, I’ll be in Austin for the Texas Book Festival, and I know I’ll dip into Houston. I have to. As you said, this city was my home for so long, and the city is definitely where Black Wings is set. Houston –and actually my East End neighborhood –  is also where my latest short story, “Railway Track,” is set, and the day after I read at Brazos, I’ll be at the Houston Noir book launch with Gwendolyn Zepeda and other friends.

To learn more about Sehba Sarwar and her work, visit her homepage at sehbasarwar.com.