It’s another Monday night at the Wortham Center in Houston, and this time I didn’t mess around getting the tickets for the Inprint Reading featuring Michael Cunningham, the Pulitzer prize-winning author of one of the most important books written in a long time, The Hours. Good thing: it is crowded already when I blow in at 7:25, and you can tell people are excited. You can’t blame them: The Hours didn’t just help us figure out how to read Virginia Woolf’s masterful Mrs. Dalloway, and it didn’t just give us another great film with Meryl Streep and Nicole Kidman, who won an Academy Award for her unadorned portrayal of Woolf. Cunningham is speaking tonight on his new novel, The Snow Queen, but, at least for me, there is no getting away from The Hours and lines like these:

Still, there is this sense of missed opportunity. Maybe there is nothing, ever, that can equal the recollection of having been young together. Maybe it’s as simple as that. Richard was the person Clarissa loved at her most optimistic moment. Richard had stood beside her at the pond’s edge at dusk, wearing cut-off jeans and rubber sandals. Richard had called her Mrs. Dalloway, and they had kissed. His mouth had opened to hers; his tongue (exciting and utterly familiar, she’d never forget it) had worked its way shyly inside until she met it with her own. They’d kissed and walked around the pond together….

It had seemed like the beginning of happiness, and Clarissa is still sometimes shocked, more than thirty years later, to realize that it was happiness; that the entire experience lay in a kiss and a walk, the anticipation of dinner and a book…. The dinner is by now forgotten; Lessing has been long overshadowed by other writers. What lives undimmed in Clarissa’s mind more than three decades later is a kiss at dusk on a patch of dead grass, and a walk around a pond as mosquitoes droned in the darkening air. There is still that singular perfection, and it’s perfect in part because it seemed, at the time, so clearly to promise more. Now she knows: That was the moment, right then. There has been no other.

END_OF_DOCUMENT_TOKEN_TO_BE_REPLACED 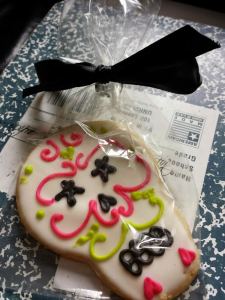 Last week—during the week—there were no fewer than 7 readings in Houston. And readings—and their high frequency and quality—seem to be a perennial source of confusion for writers in this city. Bring up readings to a student in the Creative Writing Program at UH and you’ll likely hear either excitement: “I know! I can’t wait,” or quiet guilt and dread—as though each reading torments like another book one hasn’t read and, you know, really should—“Gah, I haven’t been to a single one yet.” Trying to navigate this writing life that I’m supposed to have—which I’m learning means “that I’m supposed to make for myself”—is not what I expected when I was dreaming about it in my Business Statistics class three years ago: drinking coffee and letting brilliance flow from my fingers for hours a day.

Nope. When the time comes every day for me to write it’s like, I don’t reeealy have to write today, right? Which may not seem like a compelling argument right now, but that argument comes—from the Devil, I think—via my sleeping self at 6:00 or so in the mornings. And I’ve proven pretty much unable to beat it so far. That adds up to a lot of days of not-writing. And when I do sit down to write—when I steal a few minutes at work or in the afternoons or evenings (something gave me the guts this past Sunday afternoon)—writing turns out to be hard work. More simply put: writing is work. Like real, actual work. Amazing. END_OF_DOCUMENT_TOKEN_TO_BE_REPLACED