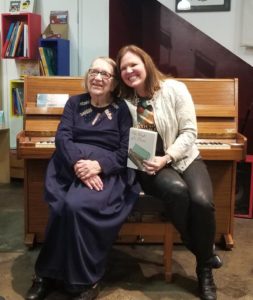 Houston author Chris Cander’s “Dispatches from Book Tour,” a multi-week blog series of reflections and updates along her 17-city U.S. book tour for her new novel The Weight of a Piano (published by Knopf), continues with Dispatch 15, from Los Angeles, California.

From blizzard to beach: after an early flight to L.A. and before my interview with the legendary Michael Silverblatt for his Bookworm podcast, I put my feet in the sand and watched the blue-green Atlantic Ocean waves roll in on the beach where, in The Weight of a Piano, Clara’s parents took her as a child during happier times. 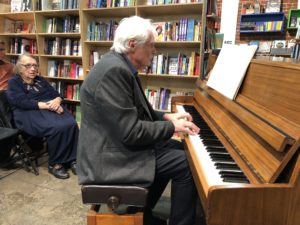 After meeting with my film agent, who’s very excited about the directors and actors who are currently reading, we went to Skylight Books. Helga Kasimoff, the German octogenarian who was so instrumental during my early research on Blüthner pianos was already there along with Russian pianist Sergey Silvanskiy and a mid-century upright that her son had brought in especially for tonight’s event. At points during my presentation, Sergey performed a moving piece by Mikail Glinka, the 19-century composer considered the fountainhead of Russian classical music, another by Alexander Scriabin, and concluded with “DieReise,” the piece by Konner Scott that appears in the novel. The highlight of the Q&A with the standing-room-only crowd was when Helga sat down with me at the piano and talked about her family’s emigration to the U.S. and establishment of their famous Blüthner dealership. It was an emotional moment for me when I was able to personally give her a copy of the novel that has her influence on nearly all its pages.