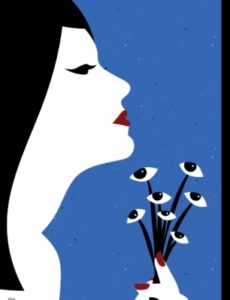 The full production will open in early April to honor Donald Barthelme, who played a key role in establishing Houston as a vital center for the literary arts. Inprint Executive Director Rich Levy recalled the piece as read by the Alley Theatre actors, which he described as “brilliant and funny and irreverent [..].” He felt a full adaptation would be an ideal way to bring the author’s fans together, and “Luckily,” he told us, “Katharine Barthelme [Barthelme’s daughter] and Greg Dean (of Catastrophic) were equally thrilled!”

Dean directs the staged reading (and will stay on for the full production), and was kind enough to answer some questions about the play.

CHARLOTTE WYATT: Barthelme began adapting Snow White for the stage, but didn’t finish. Did he discuss why this novel, and why a play? How did you finish adapting the script?

GREG DEAN: If he did, I have not been able to locate that discussion. What I do know is that he began working on it in 1974, at the urging of Wynd Handman of the American Place Theatre, and that a staged reading was done on June 10, 1976. After that, as far as I can tell, Barthelme put it away in a drawer. A version of the script was published in 1992, at the end of The Teachings of Don. B. In 1996, the Alley Theatre performed a staged reading of the play.

There are a handful of notes scribbled in the margins of the manuscript, but they’re not extensive. I’ve returned to the novel, again and again, whenever I needed help.

CHARLOTTE: What, if any, accommodations will you make to speak more directly to contemporary theater-goers?

GREG: I am most excited by the advances in stagecraft that have occurred since Barthelme adapted the book in 1974, and [that] will allow us to build a production that replicates, as much as possible, the experience of reading the book.

CHARLOTTE: How does the piece reflect Barthelme’s style?

GREG: […] I’ve used only Barthelme’s own words, from the play and from the novel. No cheating, no fudging, even when I saw an easy way out. So, it’s all his style. In the play, many sections of the novel that were written in the voice of a “de-centered communal we” have been assigned to a specific character. I’ve reintroduced a narrator to get back that feeling of a floating, unspecified consciousness telling parts of the story. That’s a return to the novel.

CHARLOTTE: How does it differ from his later work?

GREG: I’d say the biggest difference is that there are more fireworks. More “fun with a capital f.” But there are sections in Snow White that would not be out of place in Paradise or The King or one of the late stories, and these are the sections that contain the emotional core of the piece, as I see it. They’re the parts that made me want to work on it in the first place.

CHARLOTTE: What about the piece do you think will resonate most directly with contemporary audiences?

GREG: I’d guess that the jokes will land first and hardest. After that, the love story, because love is timeless and universal. Or, as Barthelme wrote in “Rebecca,” a short story from Amateurs:

The story ends. It was written for several reasons. Nine of them are secrets. The tenth is that one should never cease considering human love, which remains as grisly and golden as ever, no matter what is tattooed upon the warm, tympanic page.

Dean and his cast will stick around after the reading on Wednesday to take questions from the audience. We hope to see you there!