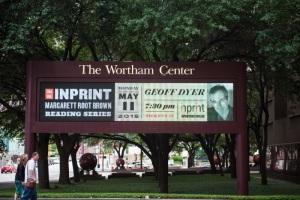 May 12th was balmy—not as hot as usual in Texas in May.  You could sit outside and feel the day slipping away. That is always a good feeling if you have done something interesting.

I mostly graded papers.  Some of it was interesting.  This is how it goes.  Still, I wanted a little more from my daylight buck.  I sat outside at Bayou Place looking straight at the Wortham Center waiting for seven o’clock to roll around.  It would be the final reading for the Inprint Margarett Root Brown Reading Series.  I was excited:  nonfiction by the English writer Geoff Dyer.  I felt like I had read a lot of fiction during the day: “Gatsby enjoys socializing with the Buchanans and finds them so interesting!”

And, some of the English: well, dicey.

It’s more about how you feel at that moment, right?  Well if you want to learn how to whip that up, and get it down, there are worse places to go than the writing of Geoff Dyer, and lucky for me, that is exactly where I went.  He read from his newish book Another Great Day at Sea: Life Aboard the USS George H. W. Bush. 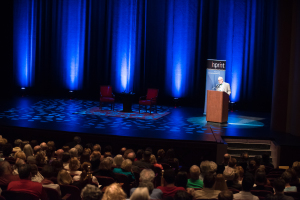 Another “great” day.  Well, more like The Great Gatsby:  great and not-so great all at the same time.

Yet this is exactly what makes Dyer different:  often, he is capable of being what he calls “100% ironic and 100% serious at the same time.”

He makes me think of Fitzgerald’s famous observation that “The test of a first-rate intelligence is the ability to hold two opposed ideas in mind at the same time and still retain the ability to function.”  Sounds about right to me.

Dyer is no rookie but finds a way to constantly try new things.  This is a good recipe for originality:  he has experience but is not jaded.  The Los Angeles Times claims that Dyer “is to essays what Anthony Bourdain is to food,” and that may be true, but Dyer prefers self-deprecation to snark, and is able to fling his paint further on the canvas.  His books are eclectic:  he improvises, covers jazz, D. H. Lawrence, not doing yoga, writes novels.  His National Book Critics Circle Award for Criticism is for essays called Otherwise Known as the Human Condition.  Yet his essay isn’t on Sartre but on doughnuts.  I know:  expect the unexpected.  He is more like Montaigne, writing on cannibals and procrastination, treating the essay in the spirit in which it should be intended: the good old college try, the sincere attempt, not the refuge for know-it-alls.  Dyer doesn’t let you down, because he does not believe in the false promise. Instead, he believes in adventure.

He reads an amusing account of how his spoiled brattiness made him demand his own room on the USS George H. W. Bush, only to end up in the noisiest suite at the Ritz in the process of getting his way.  He can take a joke, even laugh at himself.  Yet still he can acknowledge the seriousness of what it takes to run an aircraft carrier. Dyer sees the ironies of war culture without boring political polemic.  He would prefer to be utterly fascinated, interested in the people and objects around him and what makes them tick.

He can take a joke, even laugh at himself.  Yet still he can acknowledge the seriousness of what it takes to run an aircraft carrier. Dyer sees the ironies of war culture without boring political polemic.

Since we have plenty of smug political correctness, it is refreshing to be around him on the page, see that he is experiencing things the way Hemingway wanted his readers to experience things, roll with it.  We don’t have too much time to judge anything:  there is action and overwhelming noise and close quarters and prayer and it is all about Dyer and how it is going for him.  Since I am not going to hang out on an aircraft carrier, he does it for me, takes me with him. I can think about what it all means later. 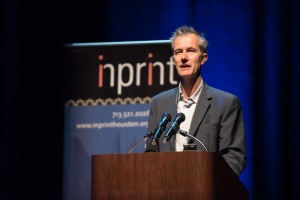 At the beginning of the reading, Rich Levy introduces Dyer as someone who “defies expectation” and “subverts academic discourse.”  I suspect that one of Dyer’s primary acts of defiance is in completely ignoring the conventions of discourse because they make no sense to him:  they are as made up as fiction.  He ignores genre because experience and our reactions to it have no genre: they change with the person speaking.  He observes and reports and comments and sometimes it is funny and his authenticity has such a smart charm that it is what it is and there is no reason to change it because of someone else’s genre theory.  Much better to have an engaging companion on the page, in the jazz club, on the aircraft carrier.  You can take him anywhere, and we all know you can’t say that about everyone.

As the reading continued, Dyer surprised at every turn.  When welcomed back to Houston, he made jokes about wonderful meals with diseased chefs—but no one is offended, he is funny.  He dispenses with the expected compliments—prefers to warm the audience up with humor.  He doesn’t follow protocol in his work either.  When it comes to book proposals, and contracts, he confesses that he “can’t bear to have the weight of a contract” and that he’s “never done it that way.”  And why should he?  Better just to write, figure it out as you go, swing like jazz, follow the impulses like D. H. Lawrence. 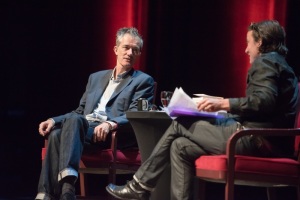 I love that he got his gig on the aircraft carrier in part through the Swiss writer Alain de Botton, another one of my favorite writers of experience delivered with shots of intellectual curiosity and wit.  Dyer knows that there is no irony like the dramatic irony of real life:  it is “so easy’ to get aboard a highly regulated American aircraft carrier, he is given amazing access even if he is not a “proper journalist,” the aircraft carrier is “the safest most dangerous place on earth.”  Pilots in the danger zone use call signs like “Disney” and juxtapose cockiness with confessions of being humbled by a g-force so powerful that “you don’t know where you are.”

Dyer sees life as a collision of forces—there is always “a lot to take in.”  His personal collisions (“a place and a sensibility (mine)”) are his own launching pad for his accounts, but they don’t have to have a moral beyond taking it all in.  Dyer isn’t phony:  he knows when language has its limits.  The noise on the aircraft carrier is so overwhelming “it was a noise beyond metaphor.”  And we don’t need one to believe him.  When aboard the carrier that has 66 planes, Dyer says, “ I was forever in the way.” In a typical act of self-deprecation, he says, “I stuck out like a hitchhiker’s thumb.”  But it is okay: sometimes you need an outsider to get the inside story.

Nick Flynn, poet, playwright, memoirist, and faculty member at the University of Houston Creative Writing Program, brings a bunch of Dyer’s books out and marvels at how Dyer is so prolific:  he makes his adventures and “not working” translate into work.  He asks pointed questions, but I like how it is more of a conversation, meandering, and more interesting for it.  Dyer is okay with not having all the answers anyway.  He is more interested in the unexpected:  how the necessary hierarchy of the military still has “the lovely American thing” of democracy in its midst.  How apolitical the experience of being in the Arabian Gulf can feel once you start to get to know individuals, live the life.  How prayer can be a dominant force on a military aircraft carrier always ready for war. 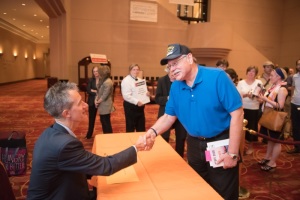 After a health shock he had (“it was a brain thing”), Dyer confesses that he “wouldn’t have traded it for a brainier brain” even if it were possible.  He tells us that he came from “a cloud shrouded little rock” of a country called Britain, but lets us know that is just a phrase for where you might come from: it sure isn’t some predictable fate.  Surprises are everywhere.

Like Montaigne, like Whitman, like anyone who has to function, Dyer is accepting of our contradictions.  He is obsessed with “reportage” yet insists he is not a reporter, but of course he is and he isn’t all at the same time.  He is more interested in what Flynn calls the “internal wheel spinning” of his mind, and you leave wishing yours could spin so colorfully, fast and furiously, but never out of control, with pauses for something funny, an allusion, some delight.

Like Montaigne, like Whitman, like anyone who has to function, Dyer is accepting of our contradictions.  He is obsessed with “reportage” yet insists he is not a reporter, but of course he is and he isn’t all at the same time.

If you cannot get enough of Geoff Dyer, the Inprint Book Club will discuss his book at Inprint House on Sunday, June 14, 4 pm. Free. Click here for more details.