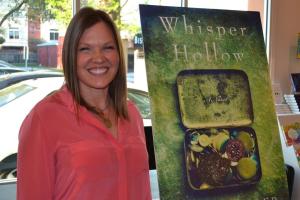 “I’ve loved to write my whole life,” says Houston author Chris Cander, whose novel Whisper Hollow was published this spring by Other Press to critical acclaim. “It’s always been a passion for me.”

A former fire-fighter, Chris was also a competitive bodybuilder and model before she brought her literary calling to the fore. Now, however, she knows she made the right choice.

“I can legitimately say that I am doing exactly what I want to be doing and I passionately love the way I get to spend my days. I’m incredibly lucky to be able to say that, I know, but now I really am doing my favorite thing.”

The publication of Whisper Hollow did not, however, happen overnight.

“It took a very long time to get this story to this point. I wrote it, and then I rewrote it, I think, four times from beginning to end. It’s four hundred pages long, and there are at least that many other pages that will never be read because they were rewritten and filed away somewhere.” 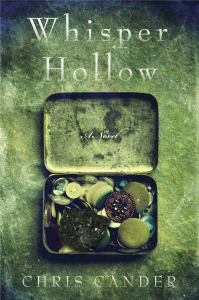 Whisper Hollow follows the lives of three women through the first half of the last century in the fictional coal mining town of Verra in West Virginia. Geographically remote and culturally diverse, Verra is full of immigrant families from Poland, Germany, Italy and other European countries.

“These people have a hard life,” Cander says, “literally scrabbling to carve out a life and a community for themselves and their families in this new country. I called the town Verra, based on the Latin root for truth, because the book is very much about the truths which these women and the people around them have, the truths that are revealed and the truths that they choose to bury. Those buried secrets drive much of what happens throughout the story.”

Though a Houston native, Chris Cander spent many childhood vacations with her mother’s family in West Virginia. Even so, she did not feel she knew the area well enough to recreate it in a novel. 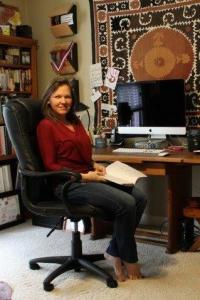 “I didn’t have the knowledge I knew I needed. I didn’t know how to mine coal or play the organ, and I certainly didn’t know how to murder people. But one of my favorite things about being a writer is that I get to call people and ask them to share their knowledge with me. It’s incredible how forthcoming people can be. I rented a car and spent two days driving around the southern part of the state with an associate professor from the University of West Virginia. He’s an incredible historian who knew so much about the area – the economics, the geography, the cultural influences. In those two days, he gave me an intensive history lesson.”

“I also spent time in an exhibition coal mine with an 82-year-old retired miner who took me underground on a coal train. He showed me how to mine coal with a pick-axe, just like the men in my story who had to work for more than eight hours in the pitch dark, often in less than 48 inches of vertical space. For weeks after that, he and I emailed back and forth, devising a way to explode a mine, something which I certainly couldn’t have done without him.”

“All along the way there were wonderful opportunities. I talked to a prioress, a Carmelite nun, and a Jesuit priest who is an expert in canon law, and I watched as an organist played a Mass.  I hope that Whisper Hollow has done justice to their expertise, their time and their generosity, because so much of what they offered went into this book, and that means a lot to me.”

I hope that Whisper Hollow has done justice to their expertise, their time and their generosity, because so much of what they offered went into this book, and that means a lot to me.

Back in Houston, Chris Cander spends time offering her own experience and knowledge to others in the same way by teaching creative writing to elementary school students through Writers in the Schools.

“I love teaching those kids. I realized early on that my strength in teaching lay in encouraging young writers to be fearless when they write. So I created a mantra – ‘I am a fearless writer!’ – that we say at the beginning of every writing session throughout the whole year. I hope, if nothing else, that when they are confronted by a blank page, they’ll remember that mantra and be able to tap into that fearlessness.”

I created a mantra – ‘I am a fearless writer!’

As well as Whisper Hollow, Chris Cander’s other published work includes the award-winning novel 11 Stories (Rubber Tree Press) and her award-winning picture book, The Word Burglar (Bright Sky Press). She has also co-written the screenplay for Germs!, an animated feature film currently in pre-production, and she has written hundreds of articles for magazines and newspapers on health and fitness and parenting. She lives in West University with her husband and two children.

For more information about Chris and her new novel, Whisper Hollow, visit her website at www.chriscander.com.