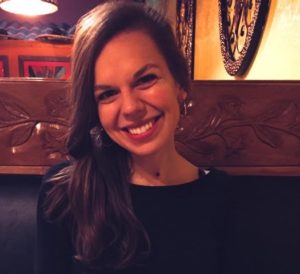 Theodora Bishop, an Inprint C. Glenn Cambor Fellow, is a woman of many talents. In addition to being the author of a chapbook of short stories, Mother Tongues, winner of The Cupboard’s 2015 contest, she was a Best New Poets nominee and her work has appeared in such well-known journals as Glimmer Train, Prairie Schooner, Arts & Letters, and Short Fiction (England). She is currently a PhD candidate at the University of Houston’s Creative Writing Program, and her latest publication, On the Rocks (Texas Review Press) came out earlier this year. I caught up with Theodora to talk to her about the new book and her writing process, among other things, and here’s what she had to say.

MATTHEW KRAJNIAK: Your novella, On the Rocks, won a 2018 Next Generation Indie Book Award. What was that like and what’s different with you and your writing now that this book is out?

THEODORA BISHOP: My husband and I were about ten hours into our drive from Texas to Pennsylvania when I received the news. I thought it was a mistake at first — I’m fairly certain we were listening to a book on CD and mowing down licorice; I was in a whimsical headspace. I was delighted when it turned out it wasn’t a mistake, and doubly delighted that On the Rocks was recognized as a novella. I think the novella is an important narrative form, and one which I relish reading, studying, and working in.Eva (the protagonist in On the Rocks) feels like an old friend, so I’ve enjoyed working on new fiction that feature similarly-minded characters who feel like they could be pals with Eva, if the novella’s universe of Ship Bottom were to slip into theirs. A great thing about the book being out is that I don’t touch the manuscript anymore; there’s been a place cleared in the cupboard, so to speak, and I’m happily immersed in new material.

MATTHEW: One of things people often note as to why they enjoyed On the Rocks so much is the use of humor in it. Humor is often an overlooked narrative tool—what’s your attitude toward it?

THEODORA:  My favorite books (and, oftentimes, people) blend a sense of humor with the serious. One of the reasons this resonates with me is because humor seems like one strategy people use to cope. As a reader, I appreciate characters that find themselves using comedy as a means to combat less favorable circumstances. On the Rocks is about a twenty-eight-year-old woman trying to come to terms with the death of her best friend — a man she claims to have been in love with since she and he were children — while preparing to serve as Maid of Honor at her mother’s second marriage. The first part (grief) is the more serious half of the equation; the second (Maid of Honor) is, on the surface, the comical (although Eva’s role here is also painful to her — she lost her father, her mother’s first husband, five years before the novella begins). The first line of the book is intended to not only set up the stakes, but to leave the reader with both tastes: “It was springtime, a year after Sebastian died, when my mother phoned to tell me she was throwing a bridal shower for herself, and I’d sure as dickens better be there: ‘You’re the Maid of Honor, Eva. So no excuses, m’kay?’ ”

When I was working on the novella, Eva’s grief preceded her mother’s impending second marriage/request of her daughter. I love standup and am a fierce advocate for artists excavating the “unsaid.” One of the delights I get from reading an author or poet I discover a particular kinship with is in feeling less alone, or recognized, because this writer has put a finger on the pulse of something I’ve experienced but have been unable to articulate or directly acknowledge for myself.

MATTHEW: You have a slew of publications, so I’m curious as to what your writing process is like. Is it relatively straightforward, are you someone that labors intensely for long hours every day, or is it some combination of both?

THEODORA: It’s relatively straightforward in the sense that I write as often as I can. I establish a routine based on where I am — in terms of jobs, school, travel, residencies, etc. The most writing (in terms of quantity) I ever accomplished was on a fellowship year in my MFA. I wasn’t teaching and had already completed coursework, so my days were spent writing and reading and wearing my pajamas for absurd stretches of time. I treated the funded time to work on my writing as a gift, and I am not one to let gifts go to waste (read: give me a carton of Cella’s cherries, and I’ll be glad to eat them all in front of you). I’ve never had a predetermined number of hours/pages/words to complete that I sign off in blood to. The amount I generate fluctuates based on what I’m doing/what works best for my routine. This year I’m taking a full course load, I’m teaching, and serving as a genre editor for two journals. I also have a wonderful husband and a cat that I want to spend time with (the second isn’t hard to accomplish — the majority of what I’ve produced in the past five years has come to fruition with her in my lap). Things that fall outside of those responsibilities tend to go on the backburner until I get my writing in. One of the wonderful things about being a writer is you can always keep what you’re working on with you — your subconscious is always hungry. So when I feel like my life circumstances have cut into the time I’d normally spend on my work, then I remind myself to kick back, relax: your subconscious is feeding. Whatever I’m working on at the time seems omnipresent. It’s there, like the best kind of secret.

MATTHEW: You serve as Poetry Editor for Gulf Coast: A Journal of Literature and Fine Arts and also have a number of poetry publications. Do you find your poetry informs you prose and vice-versa? What’s that relationship like?

THEODORA: I’m sure that it does, but almost always in retrospect. My discoveries while working in fiction and poetry are so distinct from one another. With fiction, I feel like I’m casting a net into the dark, and crossing my fingers that whatever I pull up I’ll be able to arrange into a meaningful order that pleases and surprises me afterward. With poetry, I’m always in the woods. It sometimes feels like I’m trying to guess the number of candies in a jar — the only catch is, I was the one to originally put them in the jar. In other words, I feel like I come to some answer I buried from the start. I’m very sound and voice-driven across my work, so I tend to start from a sense of voice. Whatever waits for me at the end of the line in both genres is what compels me to write.

MATTHEW: If you had to tell us about two authors that maybe we aren’t familiar with who would they be and what about their work do you enjoy?

THEODORA: Barbara Trapido has a delicious sensibility. Her writing is exquisite for its sentences alone. Shirley Jackson I’ll mention because though many may have read “The Lottery” or are otherwise familiar with her name, I’m always encouraging others to familiarize themselves with her novels. We Have Always Lived in the Castle and The Haunting of Hill House were groundbreaking for me. (Also, there is a charming character by the name of “Theodora” in The Haunting of Hill House. It’s rare for me to see my first name in print, so there’s that).

MATTHEW: Are you currently working on any big new projects? If so, can I ask what it/they might be?

THEODORA: My latest poems come from my playing around with a vision of sainthood – sainthood for the twenty-first-century girl/woman. I’m drawing from the stories of the saints, St. Lucy in particular, and mashing those ideas up with issues for young girls and women I see happening today. My current fiction projects all draw from a contemporary sense the gothic and are largely about women. I write a lot about anxiety and am interested in breaking stigmas related to mental illness. I think a good deal of that interest was rooted in my undergraduate and early graduate school years, and my experiences with, or watching friends struggle with, related issues.

MATTHEW: If you saw someone at a bookstore who was clearly indecisive about buying your book (let’s say this person is an author themselves who has never known what disposable income is), how might you intervene so that he/she might understand why they need the book in their lives?

THEODORA: First, I’d be honored. Then I’d be embarrassed — I’m often embarrassed; I’d have a good deal less to write about if that wasn’t the case. So depending on the vibes this potential book-buyer gave, I’d probably either bury myself in the stacks or creepily watch the person’s decision-making play out from a distance. I’d hope they’d buy it, if only to figure out for themselves why there is a mermaid on the cover, and why she looks so cross lounging across that rock.