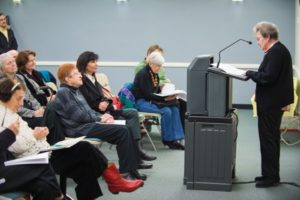 Ms. Fininis is one of twelve senior citizens in the Inprint Senior Memoir Workshop at the Evelyn Rubenstein Jewish Community Center of Houston (JCC). This Sunday, December 10th, the workshop will celebrate an anthology of the work by participants in the 2015-2017 workshops, with a reading at 2:00 pm. The event will take place at the Inprint House on 1520 Main Street, and is free and open to the public. It’s a great chance to hear from the rich, diverse histories of these amazing writers.

For more than twenty years, Inprint has offered free workshops in the art of memoir to senior citizens around the city of Houston. Very few arts programs and intellectually stimulating activities of this kind exist for the senior population so these workshops fill an important niche. Writing is not only a great way to preserve the rich detail of the past, but can be key to understanding ourselves and each other.

Participants enroll through community centers, and meet on a weekly basis from September to May. Each workshop is led by an accomplished writer—generally, students or alumni of the University of Houston’s Creative Writing Program—and culminates in a celebration of the participants’ work. The JCC workshops have been led by Henk Rossouw for the last three years

The event on December 10th will offer readings from a vast range of experiences, including travel narratives, pivotal life decisions, and more. While there’s plenty of wisdom to be had, there’s also lots of humor. Rossouw writes in the anthology’s introduction, “Simply put, we care about each other. The class sustains us, both in moments of sadness and, as is often the case, ribald humor on the page. I have never laughed so much. Indeed, I have been lucky to have this opportunity to work with such committed writers.”

“Simply put, we care about each other. The class sustains us, both in moments of sadness and, as is often the case, ribald humor on the page. I have never laughed so much. Indeed, I have been lucky to have this opportunity to work with such committed writers.”

Here below is a hilarious excerpt from a piece called “Houston Golden Girls,” from workshop participant, Caryl Singer, that covers her social life in the new millennium:

Prior to joining the Golden Girls, friends suggested that I try computer dating, but hearing the results from some of my friends that went on various dating sites, I decided to not be a part of that scene and here are a few reasons why: one friend had an interesting date via the internet.

Her newfound male “friend” told her he lived in a gated community, but that he was not at liberty to meet up with her at the present time. She soon found out that his gated community was the local jail.  Another sent her via the computer, a photo of himself. In the photo he appeared tall, well built, and with a full head of hair. After several internet talks, they decided to meet at the local Starbucks. My friend dressed appropriately and waited patiently for her newfound “friend” to arrive, hoping perhaps for a love connection. After a ten-minute wait, in walks this baldheaded man, with an extended round stomach, who appeared much shorter than his photo, but with a big smile on his face, as he extended his hand to greet her. Another internet “friend” told my friend that he worked in transportation. She later found out he was a UPS driver. After hearing these stories, I was certain that these internet dating sites were not for me.