As 2016 comes to close, Inprint marvels at all the wonderful literary events that took place over the fall months. In November, Brazos Bookstore hosted a reading by poet Sharon Olds.

Olds was scheduled to appear in the 2015/2016 Inprint Margarett Root Brown Reading Series with poet and University of Houston Creative Writing Program faculty member Tony Hoagland. Due to the Tax Day Flood in April, the reading had to be cancelled. A video was made that day during a break in the rain, featuring a reading and conversation between Olds and Hoagland, and Houston poet Martha Serpas in a private home. You can watch that reading here as part of the Inprint Archive of Readings. We were thrilled that Sharon Olds made it back to Houston this fall via Brazos Bookstore so her fans could  see her in real time. Here Inprint blogger Erika Jo Brown tells us about this memorable evening.

Appropriately, Sharon Olds’ reading at Christ Church Cathedral was preceded by the choir practice of tweens. Olds is revered—and occasionally controversial—for her delicate and unconventional poems about female sexual awakening and motherhood, among other topics.

On this night, she was introduced by Houston novelist Chris Cander, who extoled Olds’ “incomparable gifts of description” and lauded her latest collection, Odes, as a meditation on “what it feels like to occupy a mature woman’s body, mind and spirit.” 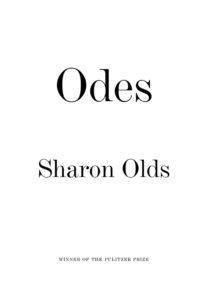 Olds alit upon this wooden-paneled space like a benevolent witch, all drapey black clothing and a shock of white long hair. She herself made a joke about riding a broomstick down the Gothic revival stairs and that “Houston is such a powerful city that (she felt) the need to call to the four corners.”

Olds included the audience in her reading in a way I’ve rarely witnessed before. Gesturing broadly, she announced: “We’re going to have a conversation.” Charming and lively, she recalled last year’s Inprint-sponsored fireside chat with Tony Hoagland. Early in her career, she noted, “frothing at the mouth” critics beset her and Hoagland did “just what you want one of the popular kids to do–stand up for you as a human and as a poet.”

She began by reading “Ode to the Hymen,” a poem she usually closes with, but had decided to “do something a little different because it’s like a birthday party.” As she praised the hymen, “like roses jello,” “the sweetmeat / of my maidenhood,” the audience was riveted and responsive.

They clapped, laughed, and a woman sitting two seats down from me began quietly weeping, she was so moved. She later revealed that Olds had changed her life when she was a young mother changing her newborn son’s diaper.

As she read “Amaryllis Ode,” “Hip Replacement Ode,” “Ode to the Tampon,” and more, Olds spoke of her influences, such as Eduardo Corral, Pablo Neruda, Leonard Cohen, the psalms, and Evie Shockley. She later described a poetry appreciation class she took with Muriel Rukeyser, “a woman of tremendous courage and bluntness.” 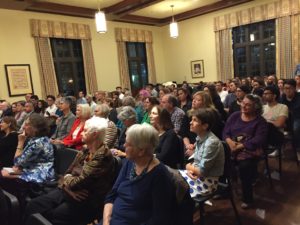 Olds proved to be a performer with a remarkable eye and a joyful heart. She pointed out the purple vest in a portrait of an old bishop. She renamed a squeaking door “a singing mouse.” She even commented that she “liked the podium” from which she was reading, because it allowed her to follow the beat “better than a music stand or a university podium.” She joked that, when she was raised, “the only people who had cell phones were witches and G-d.”

When Chris Cander joined her on stage for a Q&A, she gratefully breathed, “oooh, I have some company up here.” Their discussion was incisive and warm. Olds described her “strict upbringing” and observed: “from obedience, it’s not too far to get to the language of disobedience. You just turn.”

She also helpfully described the four stages of rejection: “First throw up, then cry, then sleep, then it’s a new day and you dance.”

Olds also said that she always knew there was “a mentally healthy pagan” in her, “in love with beauty and music.” She also helpfully described the four stages of rejection: “First throw up, then cry, then sleep, then it’s a new day and you dance.”

Ultimately, Olds remarked that “poetry is a service industry” to help people feel.

Ultimately, Olds remarked that “poetry is a service industry” to help people feel. She spoke with pride of her outreach work with hospitals and veterans. If the audience response was any indication, she certainly achieved her goal of making people feel—the room was filled with gratitude, hope, and some poetry magic.