For the past year, Inprint C. Glenn Cambor Fellow and UH Creative Writing Program graduate student Niki Herd has been teaching an Inprint Senior Memoir Workshop at Amazing Place, a day center for individuals with mild to moderate memory loss. The seniors have been meeting with Niki on a weekly basis, engaging in creative writing activities. Today, the participants from the Inprint Senior Memoir Workshop will have a celebratory reading. They will read excerpts of their written work for everyone at the center and invited guests. We asked Niki to tell us a little bit about the workshop participants and her reflections on using creative writing to work with the seniors. Please note that all names have been changed for the participants privacy. 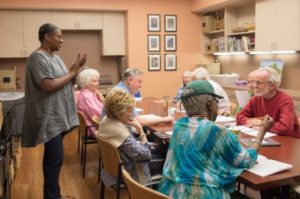 Frank, a fighter pilot in Vietnam, saved hundreds of lives on both sides of the war. William, known to break out into song about constitutional law, is a former lawyer who taught at the University of Houston for more than forty years. Lewis, a pediatrician, considers Bolivia home after spending many years there helping the poor. Katherine worked in government and has a flair for the dramatic. When she walks into class, her presence exudes the grace of an elder actress still commanding praise.

Today the persona poem is the focus and we are reading Browning’s dramatic monologue “Porphyria’s Lover.” Paul, a former engineer, remembers the poem and Katherine begins reciting aloud sonnet 43 “How Do I Love Thee” from Sonnets from the Portuguese. “Wrong Browning!” someone counters. 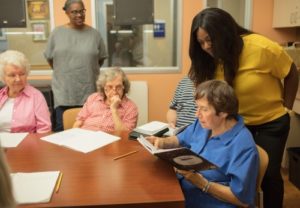 We meet every Thursday morning for ninety minutes. Along with a staff member, intern, and myself, there are usually fifteen participants, with the majority regular attendees and all lovers of literature and writing. The fact that some today can recall the Browning poem feels like a win, but not a surprising one. The writers live with early to moderate memory loss, which at times affects their ability to recall recent matters and events, rather than knowledge from the far past. Participants may come to class unable to remember the day or the month or year. And no matter how enjoyable, they may altogether forget the previous week’s lesson. The severity of the memory loss is different for each writer. Carol often reminds us that she’s in Houston only for a short visit and will return to family in Florida in a few weeks’ time. Carol has been living in Houston and taking part in the programs at Amazing Place for years now—so there is no return to Florida. This is how the disease works. 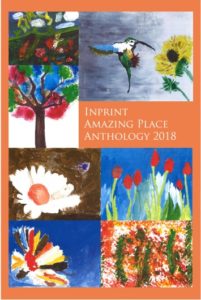 A class may include a simple prompt that jumpstarts writing about a holiday memory or class time might include more challenging mental exercises—like the writing of a persona poem, where the writer must inhabit the mind and body of someone else and write a poem from that character’s perspective. Some time too is spent discussing craft techniques and strategies, and of course there’s always laughter. After writing, each participant has the opportunity to read and share their work aloud. Stephen appreciates the classes that are a bit more challenging. He was a fan of the ekphrastic writing exercise that asked him to craft a writing based on either Hopper’s Nighthawk or Rothko’s No. 5/No. 22. Stephen has difficulty writing, so he brings work his family has typed for him and shares it with the group.

In any good class, the instructor learns as much as her students, and working with the writers at Amazing Place makes this no less the case for me. What strikes me is not what these writers cannot recall, but the passion with which they share their stories, support one another, and the fascinating lives they’ve led—and continue to live. I’m also struck by Inprint’s commitment to Houston. The organization’s concern and interest in the intellectual and creative enrichment of seniors in writing classes like the one at Amazing Place is no less than their interest in the published writers participating in their respected reading series.

Below is an excerpt of from Lewis about his life in Brazil:

I worked as a pediatrician in Cochabamba, and stabilized community clinics where pediatricians, interns, and students delivered healthcare services. During this process, the political organization of the right thought I was stabilizing a communist system in my medical services, and they put me in jail. The Pan American Health Organization found out and had them release me after eight days. They told the authorities that if there were any more problems they would stop all of the projects they had in my country.

I went home and the telephone rang and the voice said, they know what street I go to work on and what school my children go. I decided to leave the country and come to the USA.

Paul has always been intrigued by language. He says he likes the class because it gives him ‘a pleasurable experience in introspection and a way to express that introspection in a coherent way.’ When Katherine’s asked what she enjoys about the class, she says:

My written thoughts are very important to me. They float through the air in front of my eyes and I would like to snag these thoughts & pin them to paper like John Steinbeck, Maya Angelou, Toni Morrison, and other great writers have done through the centuries…. Martin Luther posting his 95 Theses on the front door of the Wittenberg church. I could pull down big, whole words from the clouds above my head and slap them around with my fists & pin them to paper so people could read about all the loves of my life.

Yes Katherine. May we all aim high to find those precious words and pin them to paper.