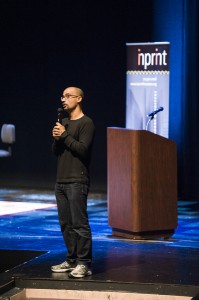 Last Monday, over a thousand of us were. We’d come to Wortham Center to see him open the 32nd year of the Inprint Margarett Root Brown Reading Series. Diaz—whose 2008 trip was nixed by Hurricane Ike—took the stage wearing dark jeans and running shoes. (Those of us who by now have read his latest collection, This is How You Lose Her, might be forgiven the desire to conflate these running shoes with Yunior’s, he of the depression-abating miles logged along the Charles River and the ruinous plantar fasciitis.)

Diaz shaded his eyes and looked into the crowd. He’d given readings, he said, at which the only people were his best friend and the guy’s fiancee, who would dump him later that night. After thanking us for coming and thanking Inprint for, as he said, “just existing,” then playfully cursing his favorite bookstore—“Damn you, Brazos,” he said. “I spent $300 there today”—Diaz read two short sections from This is How You Lose Her.

He started with “The Cheater’s Guide to Love,” the collection’s last story. He tells of Yunior’s—his fictional doppelganger, some say—breakup. Yunior’s fiancee, “a bad-ass salcedena who doesn’t believe in open anything,” he says, finds e-mail proof of not one, not seven, but 50 other women Yunior’d slept with.

The man tries to undo what he’s done:

You try every trick in the book to keep her. You write her letters. You drive her to work. You quote Neruda. You compose a mass e-mail disowning all your sucias. You block their e-mails. You change your phone number. You stop drinking. You stop smoking. you claim you’re a sex addict and start attending meetings. You blame your father. You blame your mother. You blame the patriarchy. You blame Santo Domingo. You find a therapist. You cancel your Facebook. You give her the passwords to all your e-mail accounts. You start taking salsa classes like you always said you would so that the two of you could dance together. You claim that you were sick, you claim that you were weak … and every hour like clockwork you say that you’re so so sorry. (176)

This is how Diaz has won over readers and critics alike, with this voice, what Michiko Kakutani in The New York Times calls “limber, streetwise, caffeinated and wonderfully eclectic.” Reviewing This is How You Lose Her, Leah Hager Cohen writes that Diaz employs “an idiom so electrifying and distinct it’s practically an act of aggression.” 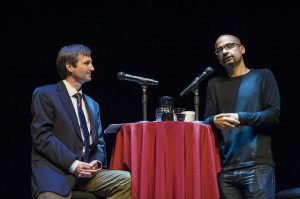 It’s true. After reading two short sections, Diaz made his way across the stage to a cocktail table, where he was greeted by Alexander Parsons, novelist and professor in the University of Houston Creative Writing Program. He crossed his legs and asked about Diaz’s technical decisions, his moves as an artist. Diaz seemed too energized too sit, as though he wasn’t trusting the chair to hold all of him up.

When Parsons gave the conversation over to the audience, the reading came to seem only a prelude for The Junot Diaz Show. There were questions from the crowd, for sure, but not so much answers from Diaz as exhortations, celebrations, demonstrations. He philosophized. He theorized. He scolded and swore and lambasted and lamented, and he squinted, and he shouted, and he shrugged, all the while moving around the stage like a rock ‘n’ roll frontman or televangelist. He claimed male writers “are universally abysmal at writing women.” He said his family never believed he’d become an artist. He said, “The past makes arguments against us that our lives have to counter.”

I heard someone behind me say, “Preach on.”

It was that kind of night. The “act of aggression” that Cohen picks up in Diaz’s prose became a kind of instrument. We were pierced by him, enthralled by him. The crowd hung on every word. He might as well have been singing. A young woman in the balcony—whose uncle, it turned out, had been Diaz’s college roommate, known to Diaz, then, as The Roughness—asked, “Who’s the girl who broke your heart?”

It wasn’t that, he said. That didn’t explain anything. It was the heart he broke.

“This, then, is the Díaz rhythm,” as Cohen writes in her review: “a syncopated stagger-step between opacity and transparency, exclusion and inclusion, defiance and desire.”

Diaz also said that what makes his work possible is his enthusiasm for reading. “I just love books so damn much,” he said.

He shared with us a dream he had regularly as a boy. He would make up extra books by his favorite writers—a lost Tolkien, say, tucked away deep on some unknown shelves—a way of ensuring that he would always have something more to read.

He would wake up before the book was done, of course. Which meant, to him, that he’d then have to write it.

You love books so damn much. You have read This is How You Lose Her and you put it down and picked it back up and now you are brimming with things you need to say. You talked to your husband but he didn’t understand. You talked to the girl at Whole Foods but she just kept ringing up your goat cheese. You need, you realize, a place to go to share your take. You need to know whether other people think Yunior is doomed or charmed with people who love books so damn much, as much as you do.

You should go, then, to Inprint’s First Friday Night Book Buzz, this Friday, October 5, from 6 p.m. to 7:30. There will be snacks and drinks and you will eat and drink some and writer Claire Anderson will be there to lead you.

One thought on ““Readers,” Junot Diaz said, “are just happy to see you.””