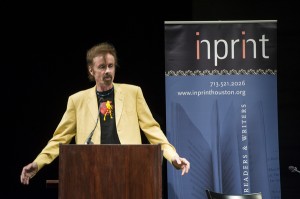 T.C. Boyle said that one of his teachers in elementary school—Mr. Carter—would bribe the class to behave with a promise that he’d read them a story at the end of the week. Touring on the release of a novel, San Miguel, Boyle was in town to read his own story for the Inprint Margarett Root Brown Reading Series earlier this month.

He stepped on stage at the Alley Theater in a buttercream jacket and red vintage Nikes. He’d arrived from London that weekend, in time to take in the Alley’s production of Arthur Miller’s Death of a Salesman. Recalling the pleasure he took from the play, the pleasure of listening to his teacher read to him, Boyle said he wanted to share with us not an except from San Miguel but a story, something “with a beginning, a middle, and an end.”

“I’d used up all my sick days,” he began. END_OF_DOCUMENT_TOKEN_TO_BE_REPLACED