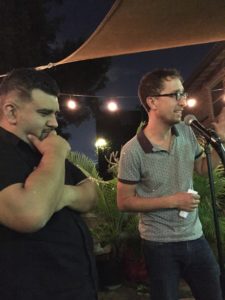 Toscano works for the Labor Institute, “a non-profit organization that provides labor unions and community groups with education on health and safety”—and this has inspired his work, which recalls Muriel Rukeyser in its activist intentions. He read from his newest book Explosion Rocks Springfield, inspired by an “actual event in Springfield, MA,” in which a gas leak combusted “almost four square blocks of property,” including a daycare, where the kids were fortuitously on a school trip, and a strip club, which was evacuated in the nick of time by a quick-thinking manager.  END_OF_DOCUMENT_TOKEN_TO_BE_REPLACED