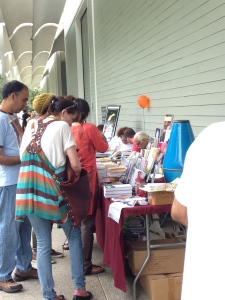 Although the weather was cloudy and grey, spirits were bright at MenilFest 2015 last Saturday. MenilFest is a multi-pronged cultural celebration, combining an indie book fair, literary lectures, musical performances, film screenings, and more.

The indie book fair flanked the northern, eastern, and southern sides of The Menil Collection museum building, providing an opportunity for local ‘zines, publishers, authors, and nonprofit organizations (I spied Friends of the Houston Public Library, the Hare Krishna Cultural Center, and the High School for the Performing and Visual Arts, among others) to display their wares and welcome conversation.

There was printed matter for everyone—romances, poetry, mysteries, cookbooks, Spanish-language, spiritual, YA, and even some book-related crafts.

Brazos Bookstore touted literature by Houston-based authors, like Nick Flynn, Tony Hoagland, Lacy Johnson, Thomas McNeely, (and, in full disclosure, moiself). I spoke to Benjamin Rybeck, events coordinator, about the store’s involvement with MenilFest over the years. “We are first and foremost a community bookstore,” he explained. “We come every year to meet our neighbors.” 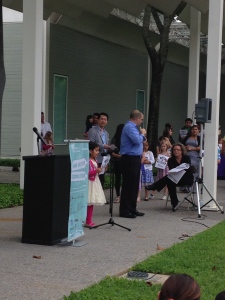 Even the littlest members of the community had a chance to participate in the day’s events. A crowd of over one hundred people gathered to hear a diverse line-up of WITS students read their original poems and flash fiction. Families on blankets and puppies frolicking on the lawn complemented the scene.

On the other end of the educational spectrum, graduate students of the creative writing program at the University of Houston, were also in attendance, with the latest issue of Gulf Coast. The Gulf Coast team had also developed a menu of readings and panels at the Houston Center for Photography. 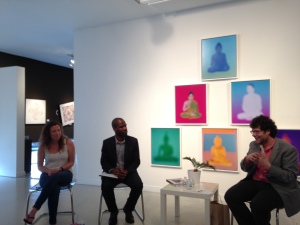 I attended an intimate discussion on interdisciplinary practices entitled “Cross-Media Influence in the Arts: A Ligatures Event,” in which Benjamin Rybeck, Talia Mailman, and moderator Brian Bowers expanded on how “art imitates art.” Rybeck explained how his love of film strengthens his fiction. Mailman revealed how her work as a harpist bolsters her writing, as well. She described how teaching “phrasing and dynamic changes” to a 12-year old music student, made her realize how closely these terms align with the art of the sentence. Bowers expounded on how collaborating with artists and writers in other genres “create something unique and distinct.” The MenilFest was certainly demonstrating that no one need be confined to one mode of expression. 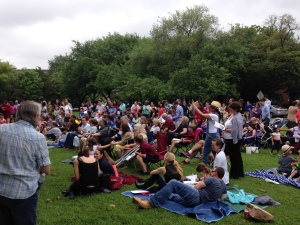 An invitation to cake and piñatas to celebrate the Zine Fest’s “unbirthday party” at The Menil Collection Bookstore was briefly alluring, but I headed over to the Inprint Poetry Buskers instead. Local authors were composing personalized poems, on the spot, for free. I spoke with Sam Dinger, seasoned Inprint busker, who listed some prompts that writers were given, including the theme “after the flood” and a directive to celebrate a brother’s birthday. He also described special moments when community members (a young girl, an older man) helped the writers come up with collaborative material.

Also in the spirit of collaboration, Glass Mountain, UH’s undergraduate literary journal, featured an interactive word game at their table. Participants could arrange and re-arrange cardboard cutouts, like an enlarged version of refrigerator magnets, to make new poems. Each word, I discovered, was taken from the story “Glass Mountain” by Donald Barthelme, postmodernist legend, Houstonian, and co-founder of the Creative Writing Program at UH.

Of course, MenilFest’s reach extends beyond local lore. I spoke with Emily Bludworth de Barrios, a Montrose resident who was representing her Buffalo, NY-based publisher, H_NGM_N Books, at the book fair. “Over the years, I’ve seen the festival grow,” she observed. “It’s a great place to discover little chapbooks.”

Of course, MenilFest’s reach extends beyond local lore. I spoke with Emily Bludworth de Barrios, a Montrose resident who was representing her Buffalo, NY-based publisher, H_NGM_N Books, at the book fair. “Over the years, I’ve seen the festival grow,” she observed. “It’s a great place to discover little chapbooks.” 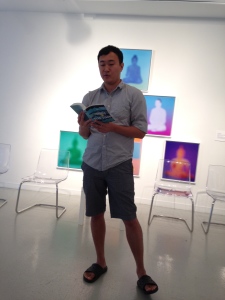 On a global note, I caught the “Passing the Transnational Baton” reading, featuring Henk Roussow, Jeni McFarland, Brian Bowers, Matthew Salesses, and Elizabeth Davies. Roussow, from South Africa, performed part of his long poem Camissa, a clear-eyed ode to Cape Town, full of dialects, the call of street vendors, zebras and Mercedes, creosote and “trackies.” McFarland read what she termed “a modern noir telling of Rumpelstiltskin,” set in Florida, and, impressively, written in trochaic pentameter. Bowers presented sensual love poems, and “jazzy blues” with the help of some audience finger-snapping. Salesses read from his newest novel, The Hundred-Year Flood, which swings back and forth between Prague and Boston. Finally, Australian-born Davies acknowledged that she was reading to a roomful of writers and chose a very funny piece of flash fiction about “the creative process and mania.” These huge talents truly reflected international flavor of our city.

In a festival this size, there’s no way I could see and hear all that was offered. My chronicle skipped music in the Cy Twombly Gallery, in the Rothko Chapel, and in the Sculpture Park, family film screenings in the Menil Library, and more. There were even more literary events than an intrepid girl reporter could get to. Next spring, I encourage you to make up your own itinerary and see what you find!