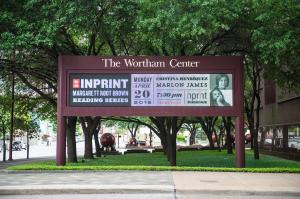 Once again, I am running late, headlights mocking me as I creep up 59.  But then, a break, and I fly to Louisiana Street and head to a restaurant for Inprint’s Books & Bellinis, a young professionals mixer, before the Inprint reading.  My Multicultural Literature students are coming tonight, too.  We are all excited: we do not know these writers reading tonight.

What I mean is that we don’t know them yet.

I meet some new friends—or writers I know from Facebook–in person, and let me tell you, in person is better.  Two of my friends win books at the party and I feel happy for them:  what is better than a new book, by a new writer, that you have never read?

I walk with my friend Elizabeth to The Wortham Center and see my students.  They look so grown up to me—we have read a lot of books together.  Some of them are graduating in May.  I am not sure if I am ready for it, not sure if I am ready for them to emigrate from the benevolent despotism of my classroom to The Next Big Thing.  No wonder people stay in college forever.  There are worse countries to visit, hang around, linger.  Everyone migrates somewhere; even the suburbs of Houston seem like independent states sometimes, each a new country, with languages that I cannot recognize at times.  That is because so many people from so many different countries come to Houston:  it is ever changing, kaleidoscopic, never boring. 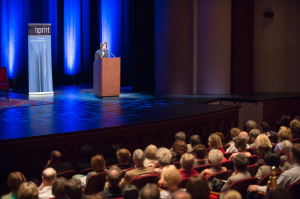 Rich Levy, the executive director of  Inprint, reminds us that 350 writers from 28 countries have come to Houston to share their words.  Sometimes, when I am grading, and I think I am on a small island known as my office, I long to get out and see the world:  somewhere exotic to me, as exotic as Abyssinia to Coleridge, Arabia to Poe, New York to everyone.  But on nights like tonight, I realize I live in a place where, sometimes, the world comes to me.

Cristina Henríquez is the first reader, and she has come all the way from a colder clime: Chicago, where she teaches at Northwestern University.  Her new novel is called The Book of Unknown Americans, and was inspired by her immigrant father’s experiences moving from Panama to Delaware, where he met her mother.  Rich has told us already that Henríquez’s influences include so many authors I love:  Sandra Cisneros, Donald Barthelme, George Saunders, Junot Diaz.  She has confessed in interviews that she is “seduced by stylists.”  I know the feeling. 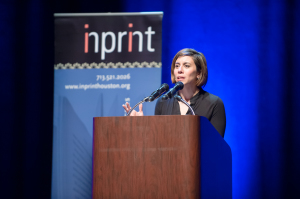 She reads from a section that highlights the interest of her characters in the election of President Barack Obama, and juxtaposes that with the post 9-11 feeling that America is no longer the safe harbor that it has been considered to be, yet complicates it with the admission that “compared to anywhere any of us are from, it’s safe.”  Yet Henríquez will later say that she is not so interested in a political novel, but in the “human stories” that the immigration experience yields.  Yes, there are logistics, but she wanted to tell the “ordinary” stories that get lost in narratives, and dramatize the “hearts that never stop breaking” and the reality of how immigrants become Americans.  She also highlights the resentments of not going back to Panama, and the “maybe one day” longing that is part of that enterprise.

Marlon James has also come from the Midwest—Minneapolis and Saint Paul where he teaches at Macalester University.  His novel, A Brief History of Seven Killings, is set in Jamaica, and has Bob Marley as the hovering ghost presiding over the multiple narrations.  But the country that takes up so much space in this book, I realize, is not only Jamaica, but also the time period of 1976 through the early nineties, with the sensibility of the seventies occupying the most real estate in James’s head.  After all, the past is another country, and James is aware of the fusion of American culture into Jamaican life, particularly during these decades. 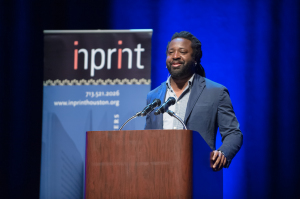 James has multiple characters, and lasers in on five days and those affected by the attempt to assassinate Bob Marley.  He highlights drugs, wild nights, desires for money: “Anything in Jamaica is up for sale.”  He describes characters through their conversations and dialogues, yet his narrators are masters of phrasing themselves:  you don’t forget it when James reads “This is how nine become eight.”  He has characters remind us that “revolution must begin in the home,” but we know that the spillover into the rest of the world can have terrifying and lethal consequences.  James knows how to dramatize danger.

My favorite part is when he presents part of the narrative in which Sir Arthur George Jennings—a ghost, mind you—is speaking to those about to die.  He speaks to Bob Marley in a lyrical riff that lingers long after the reading is over:  “You play with anyone up for a game,” he says.  Maybe you do, maybe you don’t, but you don’t forget it, and I like that a ghost thinks in a stream-of-consciousness that helps us see the influences of Joyce and Faulkner on James’s multiple narrations. 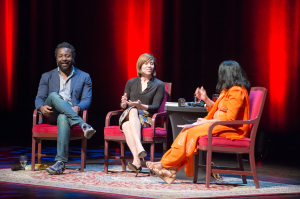 In the question and answer period, the charming Chitra Divakaruni (who teaches in the University of Houston Creative Writing Program) wears a beautiful orange sari and sits next to the writers as we all applaud.  I met her almost a decade ago when she came to my university to read and speak, and I was so star-struck, I could barely say a word.  I am sure she was wondering how I conducted my English classes at the college level as a mute.  Ah, well.  Maybe she could intuit that I was a fan.  I make a note to get her most recent novel, Oleander Girl.  Divakaruni never disappoints, and she asks Henríquez and James where their ideas come from.  At first they are a little brittle about it, but Divakaruni puts them at ease, and the answers start to flow.

Henríquez says that she “never comes to a project with an idea,” but that she was interested in the fact that “no one was telling those ordinary stories of the immigrant experience.”  For her, things start with language: a line, a sentence—not an idea.

James agrees, is delighted when he writes something and then says, “I didn’t see that coming.”  He tells us that for this novel he “didn’t have a clue what I was doing,” but I am not so sure.  But his modesty is disarming, and you think that you, too, might give writing a novel a shot, no matter where you are from.

He tells us of the “dark, nasty part” of Jamaican history that “we don’t talk about” regarding Bob Marley and his assassination attempt.  He reveals that his big “Eureka!” moment was when he was reading William Faulkner’s As I Lay Dying and realized that “a novel doesn’t have to be one person’s story.”  He is also indebted to James Ellroy’s American Tabloid and I can see that what makes James different is that he can juxtapose Starsky and Hutch with Shakespearian tragedy, Hostess Twinkies with multiple narratives: in other words, no ideas but in things, but the ideas are commensurate with those always engaged in serious literature.  No wonder he calls himself “a post-post-colonial writer.”  He hasn’t just psychologically left Jamaica and its influences—he is creating whole new literary territories.

Henríquez uses her novel to “poke at stereotypes” and looks at the human issues of immigrants once they are here.  But, she also loves love stories, and that issue—love, is not held in relief to more social and political dimensions of her writing.  She thinks her next big project is on its way—that she is like a “volcano”—ready, eventually, to erupt.

Both authors, at Divakaruni’s urging, give us some great advice:  Henríquez tells us to not get “too precious” about time and place of writing, but rather to “squeeze it into every nook and cranny of your life.”  She is in favor of “ways to trick yourself into getting it done.”   Similarly, James says we should “read everything” and “have a great first draft reader.”  Both agree we should “read like a writer”—figure out how the narrative works, and I realize you can do all of these things in Jamaica, Panama, Chicago, St. Paul, Houston. 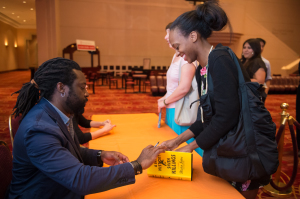 Both authors, at Divakaruni’s urging, give us some great advice:  Henríquez tells us to not get “too precious” about time and place of writing, but rather to “squeeze it into every nook and cranny of your life.”  She is in favor of “ways to trick yourself into getting it done.”   Similarly, James says we should “read everything” and “have a great first draft reader.”  Both agree we should “read like a writer”—figure out how the narrative works, and I realize you can do all of these things in Jamaica, Panama, Chicago, St. Paul, Houston.  I realize that the real estate in your head might be more important than what is around you, but if you can pick the right book, you might get to travel elsewhere anyway, take that trip, let it make you think that someone else’s voyages—far flung or not—might help you when you decide to make your own.

I drive down Smith, honk and wave at my students, wonder what they thought.  They are so young. They are traveling. The night seems cool.  We are all a little different now after hearing all those words, taking them in, heading back home.  Maybe we will go home, not be too precious about it, read everything, imagine another place, book some kind of trip.