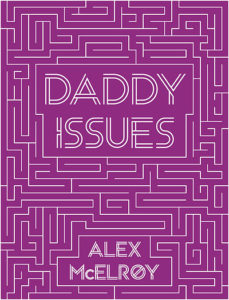 Alex McElroy, an Inprint Brown Foundation Fellow, has accomplished much as a writer: his work appears or is forthcoming in The Atlantic, Black Warrior Review, Tin House, The Kenyon Review Online and numerable other respected journals; he is currently a Fiction Editor for Gulf Coast; and he was awarded the 2016 Neutrino Prize from Passages North. What he can now add to his impressive CV is a book, specifically his chapbook, Daddy Issues, which, oh by the way, won the 2016 Editors’ Prize from The Cupboard Pamphlet. He’ll be reading at Brazos Bookstore on Friday, Sept. 8 at 7 pm, so I caught up with this busy man to ask him some questions about this latest accomplishment. Here’s what the handsome man had to say.

MATTHEW KRAJNIAK: Daddy Issues is a chapbook, which is a kind of publication that people may not be familiar with or typically associate with fiction. What exactly is a chapbook and how did this work come to be so?

ALEX McELROY: Chapbooks are normally shorter than full-length collections—and, like you said, they’re often associated with poetry rather than prose. In my case, I chose to write a chapbook because I had a series of stories that didn’t fit into a full collection—tonally, thematically—but which worked together quite well. I didn’t want to give up on those stories just because they weren’t right for a larger collection. So, I gathered them into a chapbook. Publishing Daddy Issues was an opportunity for the stories to speak to each other without forcing them into a full-length collection of stories. Here, the subject matter and themes feel more concentrated than they might in a larger book. And I’m very glad that the pieces were able to find a home together in Daddy Issues.

MATTHEW: As the title suggests, this work has to do with fathers in all their “splendor and flop.” From an aesthetic or philosophical standpoint, what prompted you to explore this particular theme?

ALEX: Part of putting together a collection is the unveiling of unconscious obsessions. Fatherhood was one of those obsessions for me. This is partly to do with my own father—I won’t pretend like it isn’t. My parents split up when I was a baby, their divorce both catastrophic and subdued. I was too young to know the divorce, but I grew up, became a conscious human, in the aftershocks of their failed love. My mother dated new men, married new men. I got to test out other fathers while seeing my own every couple of weeks. I grew up seeing fathers as temporary figures and transitory. Furthermore, my grandfather, who lived next door to my mother and me, was paralyzed a few years before I was born. Once a domineering, independent patriarch, he spent the last twenty years of his life becoming increasingly vulnerable and reliant on family and professional caretakers for help—I was the only one in my family who never knew him before the accident. This altered my conception of men, fathers in particular, and that vision of fragile fatherhood kept reappearing in my writing. Throughout Daddy Issues, I write about fathers in decline, the barriers to male grief, the self-defeating practice of masculinity. I tried to accomplish this through different styles and forms. There’ve been many domestic dramas about bad dads. I wanted to broach the subject from a different angle in an attempt to expose the cracks in the masculine project.

Throughout Daddy Issues, I write about fathers in decline, the barriers to male grief, the self-defeating practice of masculinity. I tried to accomplish this through different styles and forms. There’ve been many domestic dramas about bad dads. I wanted to broach the subject from a different angle in an attempt to expose the cracks in the masculine project.

MATTHEW: From your list of publications and your young age, it’s clear that you can produce work quicker than most. What are your beliefs/ideas concerning the writing process?

ALEX: My ideas about writing are pretty straightforward. I write every day, which is largely how I produce so much. Even if it’s only for a couple minutes, I try to always make time to write something for myself. I write as free of distractions as I can—I shut off my phone, unplug my router, hide them both far from my desk. I don’t have the willpower to keep them anywhere near me. I am also lucky to be married to a brilliant writer, Allegra Hyde. We’re great at writing alongside each other for hours. This holds us accountable to each other and to the work.

It’s also important for me to read or watch or listen to art—to interact with it in some capacity—every day. Thankfully, Houston makes that easy. If reading doesn’t stir me, I can walk to the Menil or go see a movie. Seeing art makes me want to produce art. I feel lucky that there’s so much excellent writing in the world right now.

MATTHEW: Who are some authors that you feel influenced the stories in this collection of stories?

ALEX: The Swiss modernist writer Robert Walser is one of my all-time favorites, and this collection must be indebted to him in more ways than I know. Donald Barthelme was also a huge and fitting influence. I borrowed a lot from the novels and stories of Alexandra Kleeman, whose work I deeply admire for its intelligence, strangeness, and heart. And I’m a sucker for pretty much any book put out by the publishing house Dorothy: A Publishing Project: Renee Gladman’s Ravicka series, Joanna Ruocco’s Dan, Jen George’s The Babysitter at Rest, and many more. All the books I mentioned are eerie and funny and excitable—and that’s what I aimed for in Daddy Issues.

MATTHEW: Certainly you have other projects in the works right now, can you talk about a current favorite and how it may or may not diverge from the writing in Daddy Issues?

ALEX: I can’t name a favorite! But I will say that the project I’m most invested in right now is my novel project. It’s about two best friends who start a cult for disillusioned middle aged men, and it expands on a lot of the ideas I grappled with in Daddy Issues, things like American excess, grief, and the self-defeating nature of masculinity.

MATTHEW: If, for some reason, you were arranging a window display of Daddy Issues and a bookish-looking person saw it from the sidewalk and came in to ask you why they should read it, what would you say?

Daddy Issues is part of a larger conversation attempting to uncover a language for masculine grief and vulnerability.

ALEX: Daddy Issues is part of a larger conversation attempting to uncover a language for masculine grief and vulnerability. It uses humor, wit, and formal innovations to engage with those subjects, and recent studies have proven that people who purchase and read Daddy Issues live, on average, twenty-percent longer than people who don’t.