On the heels of LGBT Pride Month comes Houston’s own QFest. Entering its 21st year, QFest is dedicated to promoting the arts that are by, about, and of interest to the gay, lesbian, bisexual, transgender and queer community, and this year has a wide range of films that reflect this mission. The festival runs from July 27 – 31 and has partnered with the Museum of Fine Arts, Houston, Aurora Picture Show, and Rice Cinema, to name but a few, as venues for screenings. Each year the festival grows larger and stronger, so I talked to Kristian Salinas, the festival’s Artistic Director, about two of this year’s films that have strong literary ties: Maurice (playing Sunday, July 30, 5 pm at the MFAH), which is based on E.M. Forster’s book of the same title, and Bones of Contention (playing Saturday, July 29, 5:15 pm at Rice Media Center), which centers on Spain’s most famous poet, Federico García Lorca. For tickets and more information click here.

MATTHEW KRAJNIAK: What specifically about these two films made you decide to include them in this year’s QFest? 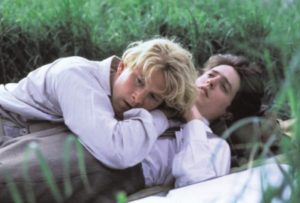 KRISTIAN SALINAS: Maurice is a landmark film, having achieved mainstream success in its time in spite and because of its honest and thoughtful depiction of a closeted romance between two men who belonged to a particular stratum of British society that maintained its status quo by enforcing very rigid and unyielding rules of behavior. Further, Maurice, as directed by James Ivory, is an exquisite adaptation of E.M. Forster’s novel, seamlessly transporting its audience to another place and time. For a generation perhaps more accustomed to such post-modern period pieces like Downtown Abbey, the lack of any nods to our modern thinking lends Maurice a profundity that is both intellectually and emotionally gratifying.

Bones of Contention is a troubling yet engrossing account of the treatment of gays and lesbians during Spain’s Franco regime. Perhaps most striking is how a so-called civilized, western society can quickly collapse and turn against its own citizens, a sharp and timely reminder that no society is above the circumstances that can lead to such collapse. That García Lorca was compelled to speak out against this dark turn in Spain, and essentially sacrifice his life to do so, speaks to the undeniable power of art, a testament behind the truth of the old saying, “the pen is mightier than the sword.” I would also like to point out that Bones of Contention should be seen as a companion piece to Agustí Villaronga’s notoriously disturbing In a Glass Cage, both celebrated and reviled for its unflinchingly depiction of a victim becoming the victimizer. On the surface, these films have little in common, but both speak towards our own troubling times, and my hope is that audiences will come away from both with a clearer sense of what is truly at stake if we remain on the path we are currently travelling on.

On the surface, these films have little in common, but both speak towards our own troubling times, and my hope is that audiences will come away from both with a clearer sense of what is truly at stake if we remain on the path we are currently travelling on.

MK: Forster published Maurice in 1913, and García Lorca’s career spanned the 20s and 30s. What is most striking to you about the relationship society had to homosexuality back then?

KS: E.M. Forster resisted publishing Maurice, and so it was only published after his death, in 1971. What a travesty when one considers the happy ending Forster allows his two male lovers to experience at the end. García Lorca is a celebrated writer in Spain, but little, or nothing, is mentioned of his sexuality, and the fact that his sexuality ultimately led to his death at the hands of the Franco regime.

In some ways, society’s attitude hasn’t really changed, and by that, I don’t necessarily mean to sound negative, but rather to point out that the fundamental anxiety almost every society expresses towards homosexuality is rooted in the act of sex as played out in the minds of those who strongly oppose homosexuals. For example, in order for the LGBTQ community to persuade the majority towards same-sex marriage, a new term, “marriage equality,” had to be coined in order to get the sex act out of people’s minds. It worked because it allowed non-homosexuals to better understand what all loving couples share in common, but it also sadly goes to show that society as a whole continues to express unnecessary hostility against sexuality.

MK: As a follow-up, Clive in Maurice struggles with the relationship he has with himself and his homosexual impulses. What do you find interesting about this specific depiction of this relationship?

KS: Clive is a pitiful figure, and it’s a tragic irony that Clive should be the one to inspire homosexual feelings within Maurice. Clive is emblematic of individuals who repress their true nature to such a degree that they become empty vessels, lacking any emotional use to those closest to them. That being said, Clive’s complete detachment from his true self ultimately enables Maurice to find true love, liberating himself from everything that led to his own repression. 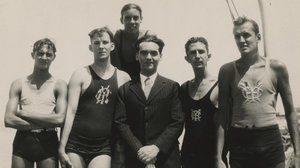 MK: Bones of Contention is described as exploring “the theme of historical memory in Spain” as it relates to the repression of lesbians and gays. If this theme was explored in America, what might it say?

KS: I think it’s fair, and necessary, to say that such an exploration of American historical memory would also have to include our history of slavery and the genocide committed against Native Americans. Much like Spain has to do, we have to ask ourselves, as Americans, what is it we are seeking to preserve when we choose to deny our own troubling histories?

KS: Writing is a means by which an individual can express them-self. For the gay rights movement, as is the case with any movement, literature, if engaged with thoughtfully, can offer an opportunity to express what makes a cause unique, while also allowing others to discover and remind of the similarities and common ground we all share.

For the gay rights movement, as is the case with any movement, literature, if engaged with thoughtfully, can offer an opportunity to express what makes a cause unique, while also allowing others to discover and remind of the similarities and common ground we all share.

MK: Undoubtedly QFest is open to everyone, but is there anything that might be of specific interest to Houston’s literary community?

KS: Certainly! In addition to Maurice and Bones of Contention, I highly recommend Small Talk, an unforgettable documentary from Taiwan in which a young woman documents her relationship with her mother. Small Talk deservedly won the prestigious Teddy Award at this year’s Berlin Film Festival, and it is clear the audience and jury were equally moved by the film’s ability to express and reveal so much during its quietest moments. Small Talk will receive its Texas premiere at Asia Society Texas Center.

One thought on “QFest Presents: Bones of Contention and Maurice”